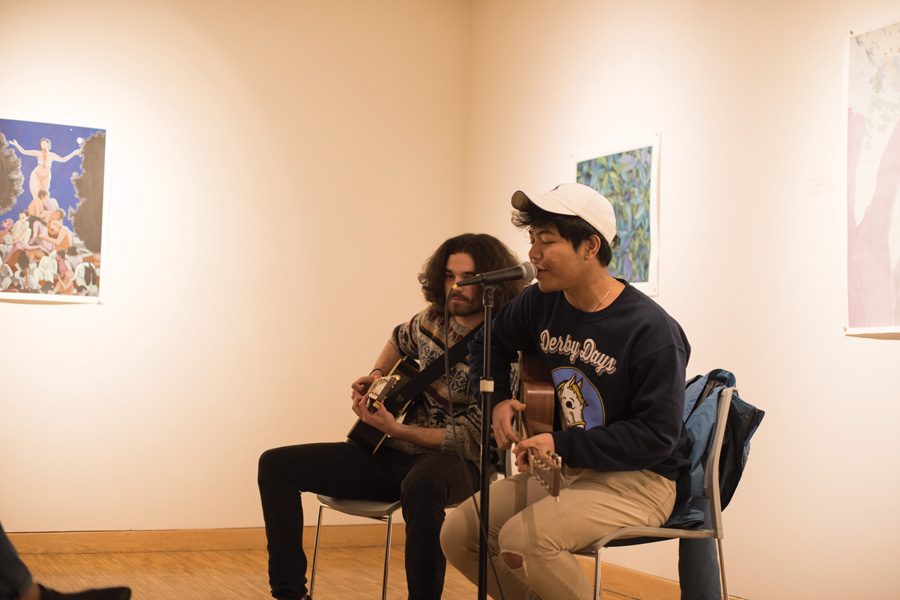 Performers play guitar during Jams for Justice on Wednesday. The event featured student performers and gave them an opportunity to speak about social justice issues.

Weinberg senior Arielle Zimmerman, an iGEM campus events co-chair, told The Daily that the event focused on the theme “Speak Up” and gave students a platform to speak about causes they are passionate about. “Jams for Justice” showcased more than 10 student performances and about 30 students attended the event held in Dittmar Gallery.

iGEM is Northwestern’s chapter of Girl Up, the United Nations Foundation campaign that aims to promote the education, wellbeing, safety and leadership of girls in Ethiopia, Liberia, Malawi, Guatemala and India, according to iGEM’s website.

Arielle Ticho, co-president of iGEM, told The Daily that iGEM focuses on community development and educates girls in the Evanston and Chicago communities about issues of inequity they may face. The SESP senior said on campus iGEM aims to educate students about gender equality while fundraising for the UN campaign.

Zimmerman said since 2014, the club has grown from about seven active members to more than 20.

In the past, “Jams for Justice” was more of a general open mic event, but this year iGEM chose to give the night the theme “Speak Up,” she said.

To give the event a clearer focus, Ticho said the group decided to center the night on a universal theme that could relate to the work iGEM does.

“It’s this idea of when do you raise your voice, what causes are you passionate about, what are you going to make sure you don’t stay silent on,” Ticho said.

“Jams for Justice” first started in 2015 as an event to raise money for Girl Up and to engage with the NU community, Zimmerman said. She said the event’s theme gave more of a structure and direction for performers to follow.

“We want to kind of give people a place where they can speak up about issues that affect them (and) the ways that they fight injustice in their lives,” Zimmerman said. “We’re essentially trying to focus the conversation a little bit more around social justice and the different forms it can take and how art is a form of social justice as well.”

Meghan Reckmeyer, the other iGEM campus events co-chair, told The Daily that the event allowed audience members to support various causes by writing what they “speak up” for on a banner.

Though “Jams for Justice” raises money for important causes like social justice and gender equality, the SESP sophomore said the event itself offers an “intimate” and welcoming atmosphere for both performers and audience members.

“I see iGEM as kind of like a smaller but inclusive community where all of our voices are heard,” Reckmeyer said. “I feel like this event is reflective of that.”