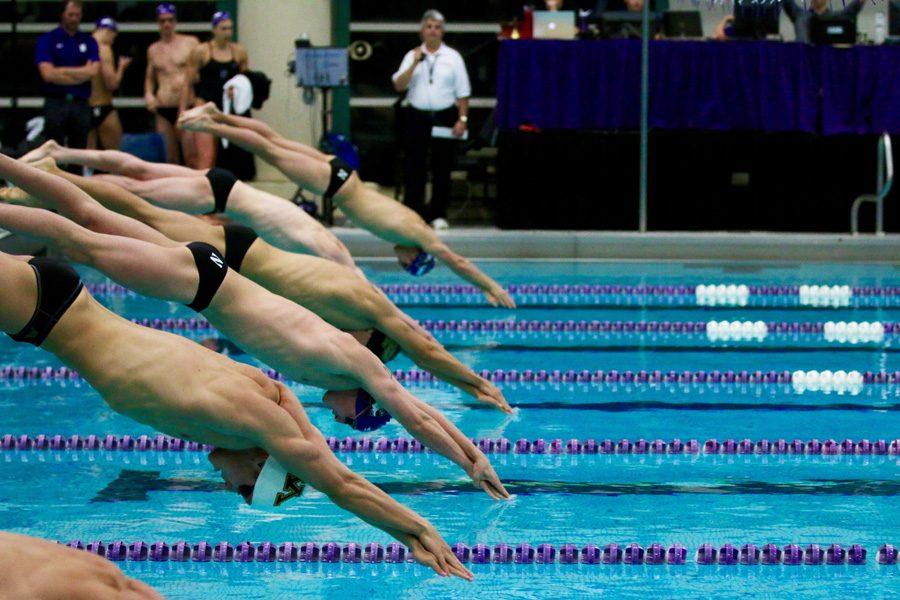 Sophomore Will Hofstadter dives into the pool. Northwestern finished ninth in the Big Ten Tournament.

After going winless against conference opponents in the regular season, Northwestern hoped to regain traction at the Big Ten Tournament this weekend at Ohio State.

Sophomore Will Hofstadter said several NU swimmers missed the tournament due to “sickness and extenuating circumstances.”

“A couple of guys still had some really good swims,” Hofstadter said. “It was rough going in knowing we had some guys out, but I think overall we held it together pretty well.”

Senior Jordan Wilimovsky provided one of the standout performances, taking second in the 1,650 free and coming just five seconds short of the top spot. He was named second-team All-Big Ten after completing the event.

The tournament marks the end of NU’s season, though Wilimovsky will return to the NCAA Championships for the fourth time in his collegiate career after qualifying with an ‘A’ time in the event.

“It was weird seeing all of the seniors done,” Wilimovsky said, “but I think everyone had a good time.”

Even so, the Cats struggled mightily in their 21 events. No NU swimmer posted a top-25 time in the 100-yard freestyle or the 200-yard breaststroke, and none reached the top 30 in the 200-yard butterfly event.

Only Wilimovsky and Tyler Lis, who finished 18th in the 200-yard backstroke, competed in a swimming final.

Wilimovsky will look to close the season on a high note when he takes on the nation’s best in Indianapolis in March’s NCAA Championships.