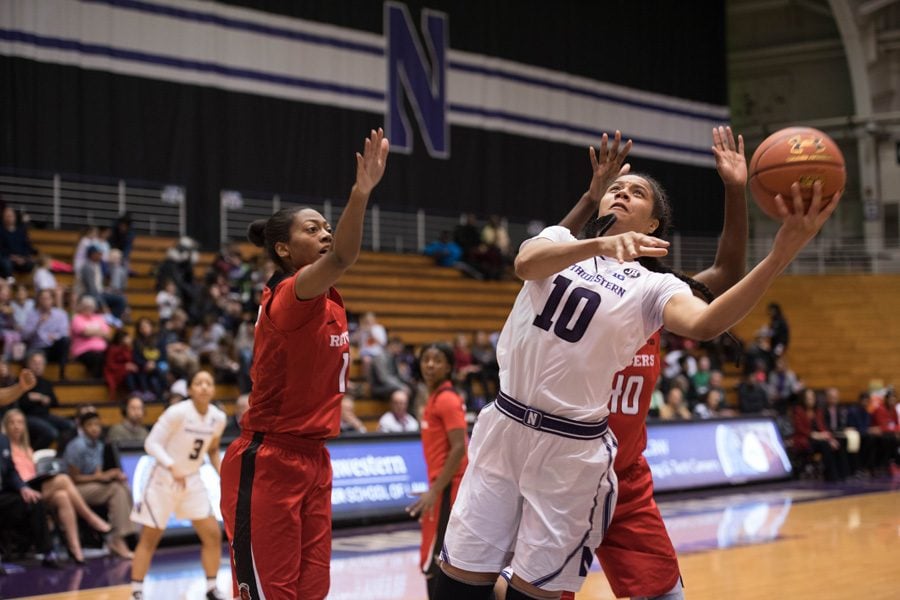 Nia Coffey attempts a shot. The senior forward notched 19 points but couldn’t lift Northwestern over the Boilermakers, who won on a buzzer-beater.

One-tenth of a second caused all the heartbreak.

Purdue guard Andreona Keys’ putback attempt left her hand with that much time remaining, and it went in to give the Boilermakers (19-11, 10-6 Big Ten) a stirring win over Northwestern (19-10, 8-8) 61-59 in the teams’ regular season finale in West Lafayette.

“I don’t know what to say about it,” senior guard Ashley Deary said. “We missed a block out on the backside, and that’s how she got the putback layup.”

The buzzer-beater capped a late charge for Purdue, which trailed 59-55 with 1:55 to play but held the Wildcats scoreless from that point and capitalized on a broken final play as Keys provided the winner.

The finish rendered a 15-0 NU run spanning the third and fourth quarters, which turned an 11-point deficit into a 4-point advantage for the Cats, ultimately meaningless. Senior forward Lauren Douglas had a standout offensive performance, scoring in double figures for the first time in nearly a month with a game-high 23 points. Fellow senior forward Nia Coffey added 19 more, but it was in vain for NU.

“They just made one more play. Credit to them,” coach Joe McKeown said. “I’m proud of my team for fighting and clawing. We take the lead, and we just couldn’t close it out.”

The loss tumbles the Cats to the No. 9 seed in the Big Ten Tournament, where they will open against Iowa on Thursday. A win would have secured the No. 5 spot and sent NU to Indianapolis on a three-game winning streak, but the Cats instead closed a disappointing February with five losses in eight games.

NU’s only wins in the month came against teams far below it in the conference standings, and the Cats will need to win the Big Ten Tournament to earn a berth to the NCAA Tournament.

“The way we played today will help us next week in Indianapolis,” McKeown said. “(Our players) are excited about it. They have a chip on their shoulder. Hopefully we’ll play that way Thursday.”

The late collapse belied a strong second half for NU, which got 29 combined points from Coffey and Douglas after the break and led for much of the fourth quarter after trailing for the entirety of the first three periods.

The Cats went cold late, however, scoring just 7 points in the final five minutes as the hosts charged back to win. The stretch resembled the first half in many ways, as NU experienced two scoring droughts of 4-plus minutes that allowed Purdue to build an early advantage.

“They’re a really good defensive team. You’re not going to get everything you want,” McKeown said. “We got good looks, especially in the second half.”

It was a disappointing result for the Cats given Douglas’ big night, which helped compensate for poor play from Deary and fellow senior guard Christen Inman. They combined for just 7 points, and Deary missed an open 3-pointer in the final moments that may have iced the victory for the Cats.

NU also struggled offensively as a team. The Cats failed to reach 70 points for the ninth-consecutive game, shot just 37 percent as a team and were held below their season average of 68.4 points per game.

The Boilermakers, meanwhile, used a balanced attack featuring three-double figure scorers to snatch the win and knock NU down the conference standings.

With just four days until the Cats return to action and put their season on the line, Deary said there is no time for NU to sulk.

“We just have to focus, look at the film, see what mistakes we made,” Deary said. “On the defensive end, on the offensive end, look back on the Iowa game and just prepare and be focused.”