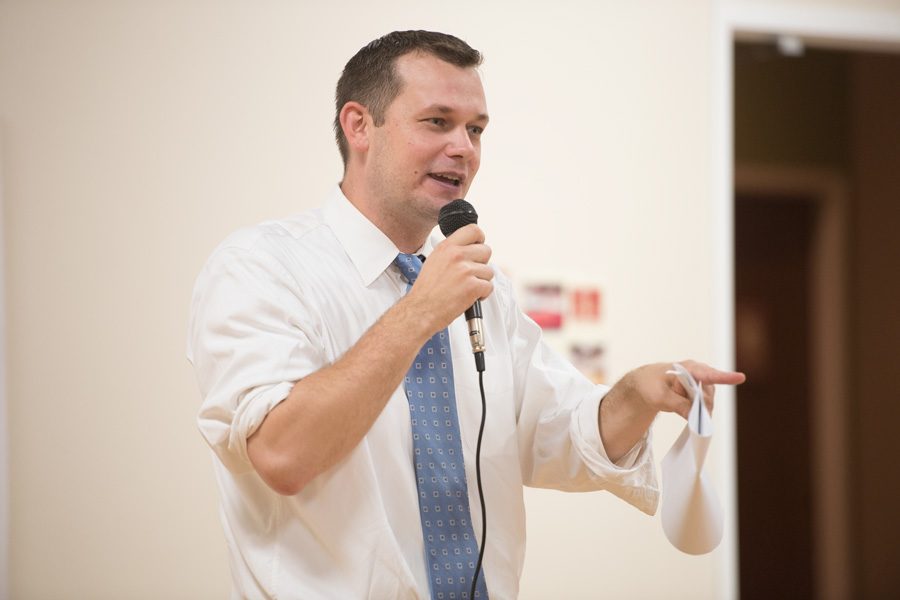 Ald. Brian Miller (9th) announced Thursday that he would seek to create an independent inspector general office if elected mayor.

The announcement comes five days before the Feb. 28 primary, in which Miller will go up against four other candidates: businessman Steve Hagerty, lawyer Jeff Smith (Weinberg ’77), former Evanston Township supervisor Gary Gaspard and Ald. Mark Tendam (6th). Miller said at a news conference Thursday morning that the inspector general would be responsible for investigating citizen or staff complaints regarding any aspect of city services, including the Evanston Police Department.

Miller said he first proposed the idea to other council members when he was appointed in May 2015, but it did not receive traction. The need for an independent investigative authority is serious, Miller said.

“There has been a number of incidents in the city of Evanston in the past couple of years that highlight the need for transparency and accountability in our city,” he said.

Miller cited incidents such as the controversial arrest video of Lawrence Crosby — a Northwestern graduate student who was arrested in October 2015 after being accused of stealing a car that turned out to belong to him — as an example of why an independent investigative official was needed.

Miller said the office would have a hiring term or be contracted from outside the city so to be “free from political pressure, free from staffing concerns or pressure from other bodies.”

“The most important thing we can have is transparency, disclosure and accountability for how the city spends taxpayer money, how the city conducts transactions and how the city is basically conducting city affairs,” he said.

The inspector would have power to investigate complaints in all city departments and would have subpoena powers to help them in their investigations, Miller said.

Currently, residents can call the city manager’s office, their alderman or the city’s 311 office to make a complaint about a city service, city manager Wally Bobkiewicz said.

“We handle issues as people raise them, so I think the council felt we’re responsive to residents in that way, so the council never discussed the matter,” Bobkiewicz said. “I don’t know that we have any track record of lingering complaints where people feel that there is an issue and it is not addressed.”

Complaints against the police department are brought forward in a variety of ways, EPD Cmdr. Jody Wright said at a community meeting Thursday night.

Miller said Thursday that some citizens didn’t feel comfortable coming to EPD with their complaints. Whether the inspector general was contracted or a city staff member, there would be separate contact information for them.

Miller said the independent investigative authority would help hold city staff accountable and encourage better use of city funds and practices. The possibility of a publicized investigation would help accomplish this goal, he said.

“There needs to be pressure put on our city staff, city officials, even our public officials as well,” he said. “We need to ensure that the public has faith in the government going forward.”