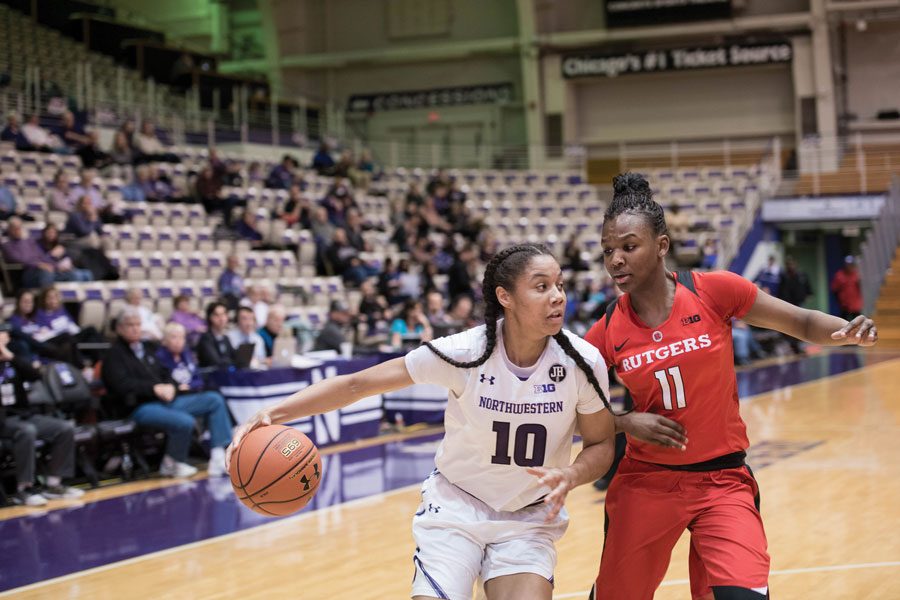 Nia Coffey drives toward the hoop. The senior forward scored 27 points in the Wildcats' win over Rutgers.

Well, somebody had to win.

In a game filled with careless turnovers, technical fouls between free throws and forgetting how much time was left on the shot clock, Northwestern (19-9, 8-7 Big Ten) managed to hold off Rutgers (6-22, 3-12) for a 60-38 win Thursday night at Welsh-Ryan Arena. The Wildcats were clearly the better team on the court, but they still gave the ball away a season-high 21 times, including when senior guard Ashley Deary bent down to tie her shoe and let go of the ball, leading to a steal and basket.

“We had some rough stretches with Rutgers … one of the best defensive teams in the Big Ten,” coach Joe McKeown said. “They do it to everybody, they’re one of the better teams where they take out passing lanes, they caught us a little bit in traps. We probably had some unforced turnovers too, made passes that we probably shouldn’t have, but they make you play.”

Deary agreed with her coach, adding that NU needs to “do a better job” protecting the ball as the season comes to a close.

The Scarlet Knights accounted for much of the slovenly basketball Thursday night, making just 13-of-50 shot attempts. At one point in the first half, Rutgers went 10 minutes and 12 seconds without a field goal.

McKeown jokingly said that Rutgers “gives me some gray hairs” dating back to his time coaching at George Washington. He praised Scarlet Knights’ coach C. Vivian Stringer for the intense games the two have shared over the years.

Despite the sloppiness on defense, the Cats shot a sparkling 50 percent from the field and senior forward Nia Coffey tallied 27 points. Coffey now has double-digit points in four-straight games and at least 20 in three of her last four.

“I thought in the third quarter we were able to get Nia going, inside and out,” McKeown said.

Senior guard Christen Inman, whose playing time has been spotty over the last few games, did not play Thursday night. Inman has dealt with various nagging injuries since Jan. 14’s contest against Indiana.

Thursday was also NU’s final home game of the 2017 season and last before Welsh-Ryan Arena undergoes a complete renovation. The arena likely won’t be ready until the start of the 2018-19 season, so the Cats are slated to play home games at Evanston Township High School next year.

“To win, that’s good,” Deary said. “But it wasn’t anything different than a regular game.”

Even if NU makes the WNIT, or sneaks its way into the NCAA Tournament, Welsh-Ryan Arena will not host any games in March.

For their season finale, the Cats will head to West Lafayette, Indiana to challenge Purdue on Sunday. The Big Ten tournament begins on Mar. 1 and NU still has a chance to lock up the conference’s fourth seed to earn a double-bye, but it needs a bit of help to do so.

“Purdue’s playing really well (at the) end of the season,” Coffey said. “We have to make sure we stop them and their key players to make sure we have a good flow offensively.”

This story was updated at 8:56 p.m. with postgame quotes.

Correction: A previous version of this story misstated the number of turnovers Northwestern committed. They recorded 21. The Daily regrets the error.