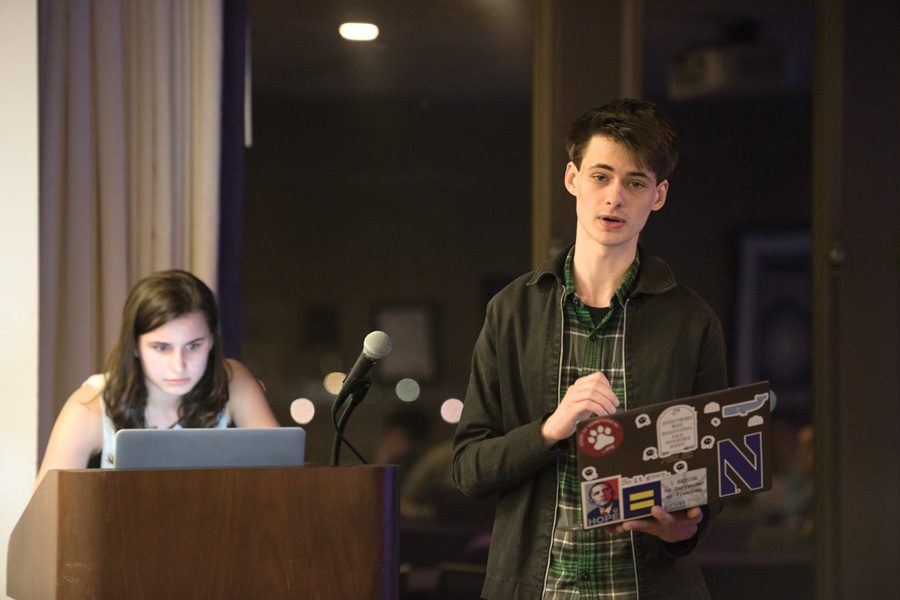 ASG senator Lars Benson speaks on behalf of a resolution promoting accountability for sexual assault. The resolution vote was stalled when four students walked out after a roll call vote was requested.

Associated Student Government Senate did not vote on a resolution promoting accountability for sexual assault after four students walked out of Senate on Wednesday, leaving the room short of the 25 senators needed for quorum.

The students walked out after after Senate decided to conduct the vote on the resolution as a roll call. The resolution calls for the University to immediately issue a cease-and-desist order to the Sigma Alpha Epsilon fraternity and another unnamed fraternity while investigations for alleged sexual assault and druggings at the chapters continue. It also calls for the University to remove individuals found responsible of sexual assault from Northwestern and asks for increased funding for the Center for Awareness, Response and Education.

The resolution comes after a Feb. 6 announcement notifying students that the administration had received an anonymous report alleging four female students were possibly given a date rape drug at SAE on Jan. 21. The report alleges that two of the students believe they were also sexually assaulted, according to an email to students from Chief of Police Bruce Lewis.

SAE’s national headquarters ordered its Northwestern chapter to cease chapter activities Feb. 9 until further notice as it conducts its own investigation.

Lewis said in the email that the University also received an anonymous report Feb. 3 alleging another female student was sexually assaulted, potentially with the use of a date rape drug, after attending an event at a second, unnamed fraternity house the previous night.

The Sexual Harassment Prevention Office is investigating the reports, according to the email.

Seethaler, who is a member of SAE, told The Daily the substitute senators were not “necessarily comfortable” having their names attached to a vote.

“This was based on roll call,” he said. “This didn’t have anything to do with the bill itself. It was simply the choice to have the vote done in a roll call manner.”

Speaker of the Senate Nehaarika Mulukutla told The Daily she’s never seen senators use quorum as a way to disrupt a vote.

Mulukutla, who asked senators to be respectful of each other before the debate on the resolution began, said she thought all sides were fair to each other during the debate. The loss of quorum at the end of the meeting was counterproductive, the Weinberg junior said.

“What happened at the very end completely destroyed everything that we worked for … to create that atmosphere and to create a respectful Senate,” Mulukutla said.

During a Senate that lasted more than three hours, senators made multiple amendments to the resolution, which was originally introduced last week. Mulukutla told The Daily the amendments made will stay in place.

Seethaler said Senate should consider the “rights of the accused” as well as those of possible survivors. The Weinberg sophomore said he believes there is currently insufficient evidence against the two IFC chapters.

“SAE has been the subject of harassment, death threats have been found on the internet, and to overlook that and to keep this going is really discounting the rights of the accused,” Seethaler said.

Bienasz said the main goal of the resolution was to promote accountability for sexual assault cases on campus. Although SAE was named specifically, the resolution can be applied campus wide, she said.

“This is a bill designed to address a pervasive culture of sexual misconduct, sexual assault and, frankly, rape culture that has invaded Northwestern’s campus,” Benson said.

Benson expressed disappointment at the members who left at the end of the meeting.

“If you can’t stand for what you believe in, and put your name beside your vote,” he said, “you do not deserve to be a senator in ASG.”

Correction: A previous version of this story misstated a substitute senator’s affiliation and Lars Benson’s year. The substitute senator was representing the Panhellenic Association, and Benson is a junior. The Daily regrets the errors.