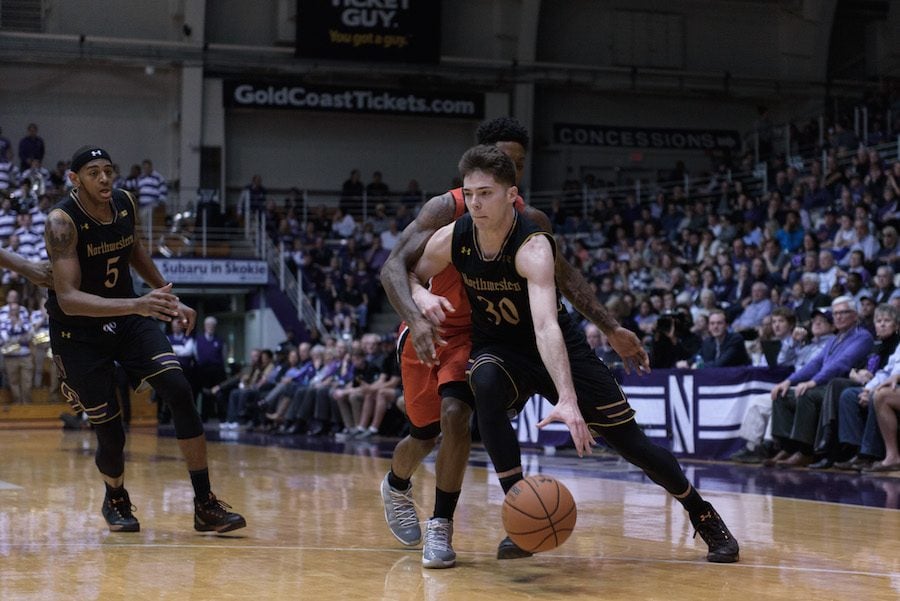 Bryant McIntosh drives past a defender. The junior guard led Northwestern with 16 points against Illinois.

For the second-straight game, Northwestern came out flat against a team it was expected to beat. But after a sold-out Welsh-Ryan Arena crowd lifted the Wildcats to a win against Rutgers over the weekend, NU found no such spark on the road Tuesday against Illinois.

Instead, the Cats suffered through a lengthy second-half offensive dry spell before falling 66-50 to their in-state rival for the second time this season.

Illinois took a 33-32 lead into the break after leading almost the entire first half. But the Cats hung tight despite some early miscues, and never trailed by more than 8 in the frame.

NU came out of the break without much offensive punch. McIntosh cooled off after his early success, and the Cats scored just 8 points in the half’s first 11 minutes. But things went from bad to worse late. NU went more than six minutes without a point after a free throw from sophomore forward Vic Law cut Illinois’ lead to 47-43.

During the cold streak, Illinois made its decisive push, using a 12-0 run to take a 59-43 lead with three minutes to play. From there, the hosts cruised to victory.

1. Scottie Lindsey has another quiet night in his second game back

Junior guard Scottie Lindsey made his return against Rutgers on Saturday after missing four games with illness. The Cats struggled offensively without their leading scorer, losing three out of four and failing to reach 70 points in any of the contests. But Lindsey hasn’t looked like himself in two games since returning, posting just 6 points in 24 minutes against the Scarlet Knights and scoring 2 points against Illinois.

Lindsey said he was feeling good entering the battle with the Fighting Illini, but it may take him some time to return to 100 percent. Meanwhile, NU’s offense continues to sputter; the Cats scored 69 points in the ugly win over Rutgers and the 50 points they managed Tuesday represented a season low.

2. February struggles continue for the Wildcats

Aside from the road upset against Wisconsin on Feb. 12, NU has had a rocky month. Between Lindsey struggling with health and Law dealing with an extended shooting slump (he hasn’t hit on more than 36 percent of his shots in a game since Jan. 26), the Cats have often looked punchless. After winning six of seven in January, NU is 2-4 this month. The good news: March is the month that counts. The bad news: To play meaningful games in March, the Cats may need to get back into form.

The embattled Illinois coach, whose team appears likely to spend March watching The Dance from home for the fourth-straight season, has at least one selling point. He now boasts a 4-2 record over Chris Collins’ NU teams, and the Fighting Illini have twice flummoxed the Cats’ offensive attack this season. In the teams’ first meeting, NU shot a then season-worst 33.9 percent from the field and coughed up 14 turnovers. And Tuesday, the Cats shot even worse, hitting 32.1 percent of their attempts.