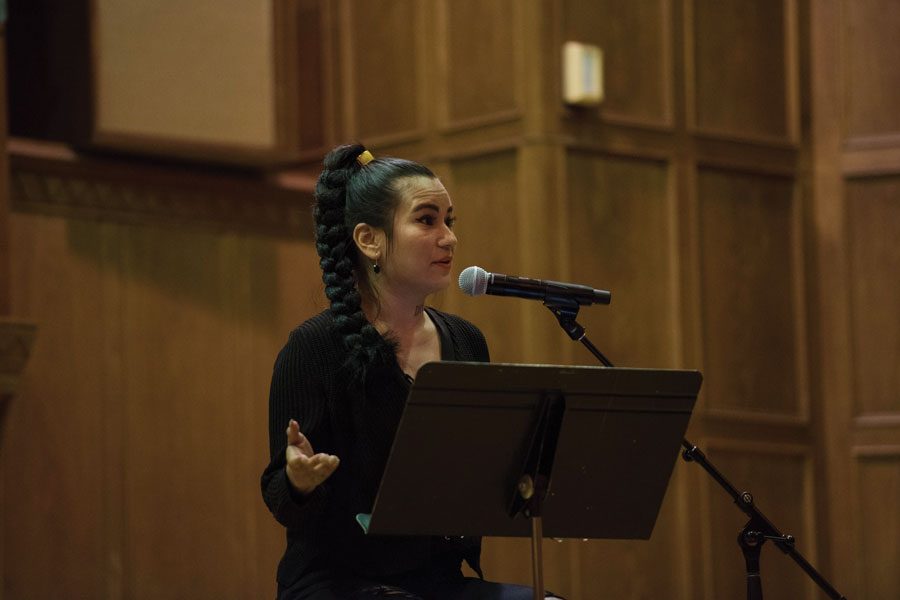 More than 130 people gathered Monday night for student performances and a keynote talk focused on discussing the experiences of Latinx students in white-majority institutions.

Weinberg senior Yoseline Huerta, a member of Lambda Theta Alpha and Interfaith Advocates, planned the event and described it as a way of creating “a space that’s geared toward brown women specifically.”

“At the university, it’s kind of exhausting to navigate a predominantly white institution,” Huerta said. “You become tired and exhausted and there’s a need to recharge. And sometimes there’s a need to recharge in community, and to listen to people like Prisca who have created these spaces online to make sure … you feel you’re not the only person who feels the way you do.”

The first half of the event provided a space for four students — both NU undergraduates and students from Garrett-Evangelical Theological Seminary — to share music, spoken word poetry and personal narratives regarding Latinx and immigrant identities.

Rodriguez, an immigrant from Nicaragua, then shared her personal story about the struggles she encountered as a minority graduate student navigating Vanderbilt University. It was her first time in an environment that was not primarily Latinx, she said.

“A lot of my work around healing is naming the hard stuff, giving a thing to the names that hurt you, to the institutions that hurt us,” she said. “Attending white-serving institutions is awful.”

Rodriguez said she began Latina Rebels — an online Tumblr and Facebook community dedicated to solidarity between brown women — in 2013 as a result of the pent-up anger she felt at Vanderbilt. She is currently taking time off from school to recover from the challenges she faced, and said she is using writing as a means of healing.

She dedicated her talk to reading prose she had written during and about her experiences at Vanderbilt, and the ways she felt hurt by and coped with institutional oppression.

“This isn’t just one story,” she said. “You all have different stories and different ways you had to adapt to institutions to make it work for you.”

Leslie Campos, a Latino studies minor at Aurora University who attended the event, said the event was “eye-opening” in helping her feel connected to other women with similar experiences.

“It made me more aware that I’m not the only one going through all of this,” Campos told The Daily. “You honestly feel like you’re the only one, but … there’s other people there with you.”

Rodriguez concluded her talk by providing words of encouragement to other students and women. Students of color face specific challenges, and it is important to channel energy into doing things one loves, she said.

“We (students of color) are told to beat the odds,” Rodriguez said. “But look at the rates of retention at any school. The students of color drop at astronomical rates, and there’s a reason for it … I needed people in my life telling me it was okay to go home, and I’m so happy I had them.”