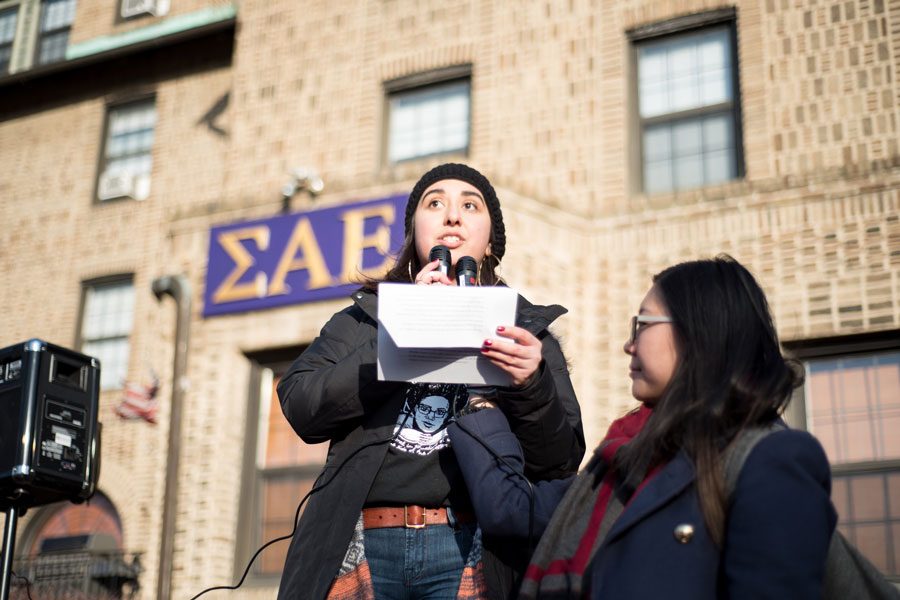 Organizers speak during a protest following reports of alleged druggings and sexual assault committed at the Sigma Alpha Epsilon fraternity and another unnamed fraternity. Organizers of the protest released a petition Monday demanding additional resources for students and increased accountability for Greek organizations.

A group of students published a petition Monday calling for increased supervision over Greek life and additional resources promoting sexual and mental health after the University notified students about anonymous reports of multiple alleged druggings and sexual assaults at the Sigma Alpha Epsilon fraternity and another unnamed fraternity earlier this quarter.

Demands in the petition include appointing a member of the Office of Fraternity and Sorority Life to oversee SAE while it is under a cease-and-desist order, and disbanding SAE if its members are found guilty of assault or druggings. The petition also demands more structural changes such as reinstating counseling at the Women’s Center, expanding programming and resources at the Center for Awareness, Response, and Education, and creating more educational programing for fraternity members on sexual assault and consent. About 50 students had signed the petition as of Monday night when it launched.

“Our organizers are women, queer, transgender, and non-binary folks, and men,” the petition said. “We are immigrants, we are people of color, we are white folks. We are members of PHA, MGC, NPHC, and non-affiliated students. And of course, we are survivors.”

The petition also calls for the creation of a task force to reassess how the University oversees student events. The recommended task force would also reconsider the University’s alcohol policy and discuss ways to change Northwestern into a “wet campus.” The petition calls for student and staff representatives from various groups including Interfraternity Council, Panhellenic Association, Campus Inclusion and Community, the Title IX Office, Students for Sensible Drug Policy and others to serve on the proposed task force.

The petition comes after a Feb. 6 announcement notifying students that the administration had received a report alleging that four female students were possibly given a date rape drug at SAE on Jan. 21. The report alleges that two of the students believe they were also sexually assaulted, according to an email to students from the University’s Chief of Police Bruce Lewis.

SAE’s national office ordered its Northwestern chapter to cease chapter activities Feb. 9 until further notice as it conducts its own investigation.

Lewis said the University also received an anonymous report Feb. 3 alleging that another female student was sexually assaulted, potentially with the use of a date rape drug, after attending an event at a second, unnamed fraternity house the previous night.

The Sexual Harassment Prevention Office is investigating the reports, according to the email.

The petition is based on demands originally conceived while planning for a protest march held in front of the SAE house and SAE’s national headquarters, said Amanda Odasz, outreach chair of Sexual Health and Assault Peer Educators and one of the original organizers of the protest. Odasz said organizers planned their demands, which they read during the protest, over social media in response to the allegations.

Organizers continued to meet after the protest to create a more detailed list of demands, Odasz said, with more targeted structural reforms.

“Anytime you’re in a situation like this, it’s important to ask big. And that’s what we’re doing,” the Communication senior said. “We’re taking this very seriously, and I anticipate and expect the University will take it seriously as well.”

Associated Student Government President Christina Cilento said she and Macs Vinson, executive vice president of ASG, found the petition aligned with their views and had several tangible measures to address the allegations. Cilento and Vinson posted a statement Feb. 8 calling for the immediate suspension of SAE while allegations are investigated. ASG Senate also introduced legislation Wednesday calling for the expulsion of students and organizations found guilty of sexual assault.

“The nice thing about the petition is that it outlines some pretty clear steps the University can take moving forward to not only address the situation but also turn toward prevention for future situations,” Cilento said. “It was pretty comprehensive in terms of the things it’s asking for.”