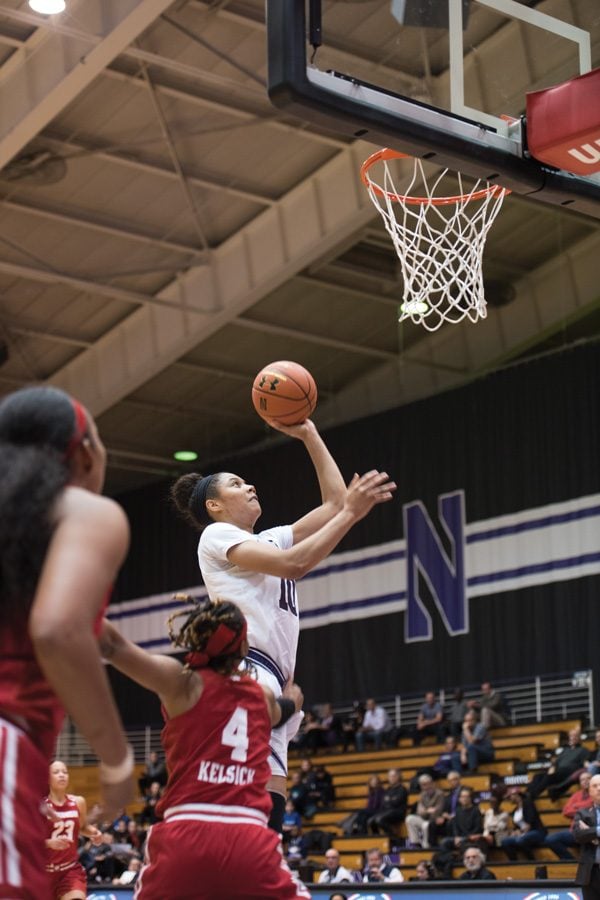 Nia Coffey skies for a layup. The forward was honored alongside her fellow seniors prior to Sunday’s win.

After hearing their lengthy accomplishments read over the arena public address system in a pregame ceremony, Northwestern’s seniors decided to add a few more Sunday.

It was the Cats’ first Senior Day win since the seniors arrived in Evanston.

“It was definitely nice to get (a win) on our Senior Day. It’s just special,” senior guard Ashley Deary said. “It’s nice getting back to our old selves, being aggressive and knocking down shots.”

As she has so many times in her career, 6-foot-1 forward Nia Coffey led the charge. She came a point shy of a double-double in the first half and finished with 18 points and 14 rebounds for her 14th double-double of the season. She was a perfect 10-for-10 from the free throw line to compensate for an inefficient 4-of-11 mark from the field.

It was a vintage Coffey performance — reminiscent of her 33-point output Monday at Minnesota — that has been lacking some in the past month. Her 66-game double-figure scoring streak snapped Jan. 17, and she has been held to single digits twice more since then.

“She’s a great player. She never complains,” coach Joe McKeown said. “She’s going to get double-teamed when she walks out of the arena today. … She’ll get double-teamed the rest of her career in college. She’s handling it pretty well.”

The Cats’ standout senior guards also made significant impacts. Deary was her usual playmaking self, tallying 14 points and eight rebounds while adding four assists and a pair of steals. She played nearly the entire game, checking out only in the final seconds to a standing ovation.

Christen Inman, meanwhile, returned to the starting lineup after coming off the bench in her last five appearances while recovering from injuries, to score 16 points. It was her first double-figure effort in four games and her highest output since early January.

McKeown said Inman was fully healthy for the first time in over a month.

Forward Lauren Douglas also contributed, scoring 5 points while starting her ninth consecutive game. A role player off the bench to begin the season, Douglas has stepped into the starting lineup as injuries sidelined Inman and junior guard Lydia Rohde, and she has averaged more than 8 points per game in Big Ten play.

NU will play one more home game, Thursday against Rutgers, but Sunday offered a fitting sendoff for the Cats’ seniors given their contributions on the day.

But NU’s seniors don’t expect the success to end here.

“When they got here, they aspired to walk out of here as a record-setting group,” McKeown said. “That’s part of their goal. They really are excited about what’s coming up for us.”