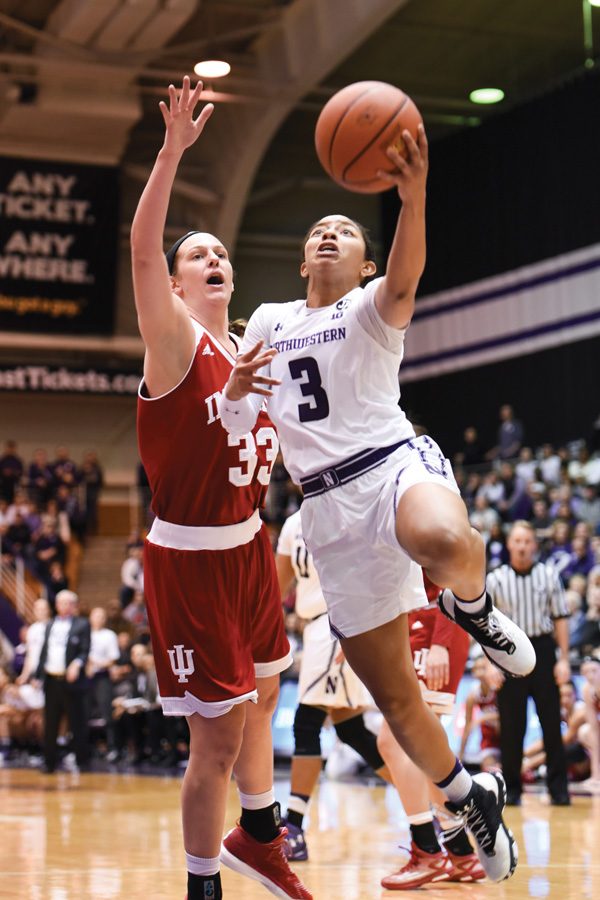 Ashley Deary looks to score a driving layup. The senior guard said the team has to make the most of its final conference games.

February has not been kind to Northwestern thus far.

After easily defeating last-place Wisconsin on Feb. 1, the Wildcats (17-8, 6-6 Big Ten) will enter Thursday’s contest at Iowa (15-10, 6-6) trying to snap a three-game skid, their longest of the year. During the streak, NU has averaged just 52.3 points per game, well below its season average of 69.2 points.

“Like a lot of teams, you have some nagging injuries this time of year that play into it,” coach Joe McKeown said. “To play a schedule where you’re playing, traveling, come back, travel again — it is what it is. You’ve just got to take advantage of the opportunities you’re gonna have and not worry about things you can’t control.”

Although much of the team has struggled offensively, senior forward Nia Coffey is coming off one of the best games of her career. The Minneapolis native tallied a season-high 33 points during Monday’s loss to Minnesota, her final game in her home state.

Coffey said a lot of family and friends were in attendance, including her brother Amir, a freshman guard for Minnesota’s men’s basketball team. She added that NU is taking a game-to-game approach to try to break its losing streak.

“We’re just trying to keep the same mentality and keep everyone motivated and on the same page,” Coffey said.

The Hawkeyes have dominated recent matchups with the Cats, winning the last six, and nine of the last ten since 2011. Thursday’s matchup will also come with added significance, as NU and Iowa possess identical conference records.

Senior guard Ashley Deary said Thursday will provide the Cats with an opportunity to rediscover their energy on the court.

“We definitely have to do a reset after the last few games, in just getting back to playing with passion … and not to take this opportunity for granted,” Deary said. “There’s still a shot to go to the NCAA Tournament and make a run in terms of our Big Ten standings, so we have to make the most of that, but we can only do it one game at a time.”

With just four games remaining in conference play, time is running out for NU to right the ship and earn an NCAA Tournament berth. Sitting at 17-5 two weeks ago, the Cats had been in prime position for an at-large bid. The losing streak, however, has put that bid in jeopardy.

Additionally, one game separates six teams seeking to earn the final double-bye in March’s Big Ten Tournament, and NU could realistically finish anywhere between fourth and 10th place in the conference. But McKeown said he doesn’t want to “overanalyze” the situation.

“There’s so many teams in our league that are all jumbled together that you can’t worry about standings or schedules; you just have to go play the next game,” McKeown said. “When we do that, we’re good.”