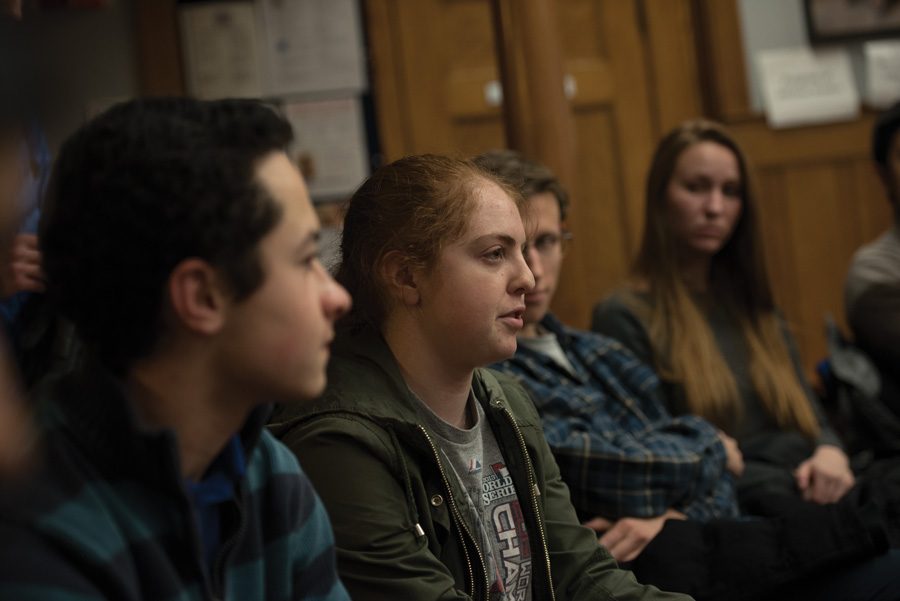 Students participate in a debate hosted by Political Union on whether Greek life should continue. Attendees voted by a slim margin to hypothetically remove fraternities and sororities from campus.

Attendees at a Political Union event Monday debated whether or not to ban Greek life on campus, resulting in slightly more students favoring to hypothetically kick fraternities and sororities off campus.

Weinberg junior Sabrina Williams, Political Union co-president, said the group reached out to all sororities and fraternities on campus asking for participants in the debate. About 40 students attended the event at the Buffett Institute for Global Studies, after which attendees voted on a resolution to ban Greek life — with 15 students in favor, 14 students against and eight abstaining.

The debate follows a University announcement Feb. 6 notifying students that NU had received a report alleging four women were possibly given date rape drugs during an event hosted by Sigma Alpha Epsilon fraternity on Jan. 21. The report alleges that two of the female students believe they were sexually assaulted. University spokesman Bob Rowley told The Daily that the report was anonymous at the time the safety alert was emailed to students.

Chief of Police Bruce Lewis said the University also received an anonymous report Feb. 3 alleging that another female student was sexually assaulted — potentially with the use of a date rape drug — after attending an event at a second, unnamed fraternity the previous night.

Though the debate was not specifically a response to the recent sexual assault and drugging allegations, the reports made the discussion more topical and resulted in turnout about twice as high as usual, said moderator Aaron Gordon, a Weinberg senior.

Medill junior David Gernon, co-president of Political Union, gave the opening statement for the affirmative and argued against the presence of Greek life on campus by citing both the recent allegations and wider, institutional problems across the nation with fraternities.

“Fraternities may be seen as safe places to drink, but the recent allegations as well as the history of problems Greek life has faced around the country contradicts that,” Gernon said.

As students discussed the culture of sexual assault associated with Greek life, Weinberg sophomore Edmund Bannister — who opened for the opposition — said that as a member of Phi Delta Theta fraternity, he has been to three sexual assault seminars in the last quarter. Bannister, who is a Daily columnist, added that the formal structure of the Interfraternity Council spends an “enormous amount of time trying to curtail these actions.”

He said banning fraternities will not actually stop parties, alcohol abuse or sexual assault. Rather, students would simply become even less accountable and cause students to hold events outside the University’s control, he said.

Weinberg freshman Jake Gordon expressed similar sentiments, saying a ban on Greek life would only push fraternities off campus, leading to unsanctioned behavior that would be more difficult for the University to monitor.

Gordon emphasized that, unlike at other schools, fraternities at NU attempt to maintain good standing with the University. He said this relationship is a “great asset” that allows the University to exercise a positive influence over fraternities.

Weinberg sophomore Calvin Anderson, however, said he believes the benefits of Greek life could easily be found elsewhere and that fraternities are not an essential part of student life.

“Any defense of Greek life presupposes the existence of Greek life,” he said. “If you’re saying it’s the best way to meet people, I think there will be many more opportunities for that once people aren’t spending so much time with their Greek organization.”

Williams, who did not participate in the debate, said the variety of participants made for rich conversation and that she found the debate productive.

Correction: A previous version of this story misstated Sabrina Williams’ year, David Gernon’s title and the final vote count and misattributed a statement saying off-campus activity would be more difficult for the University to monitor. Williams is a junior; Gernon is co-president of Political Union; the final vote count was 15 in favor, 14 against and eight abstaining; and Weinberg freshman Jake Gordon made the statement. The Daily regrets the errors.