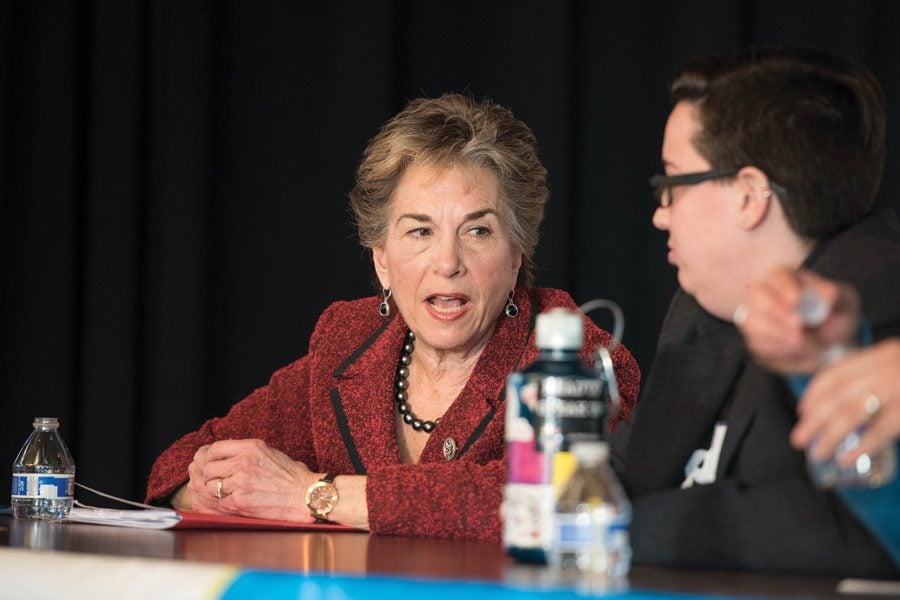 U.S. Rep. Jan Schakowsky (D-Ill.) speaks at an Open Communities event Sunday. Schakowsky called on local activists to keep “standing up for justice” at the event.

U.S. Rep. Jan Schakowsky (D-Ill.) and local activists called on community members to stay united and keep “standing up for justice” during an event Sunday in Evanston.

More than 300 people packed the cafeteria at the Pope John XXIII School, 1120 Washington St., for a meeting to touch base with Chicago-area residents three weeks after President Donald Trump took office. Hosted by Open Communities –– a non-profit organization that aims to promote inclusive housing in suburban Chicago –– the meeting addressed issues ranging from the president’s executive order on immigration to general concerns about the Trump administration.

“We are here because the new administration is doing things that seem to endorse and encourage attitudes of hate, bias and bigotry expressed through racism, xenophobia, sexism heterosexism and other sorts of oppression,” said the event’s emcee David Luna, executive director of Open Communities.

Speaking to an energetic audience, Schakowsky was met with raucous applause when she encouraged people to be “bold” in their efforts to advocate for what “America ought to look like.”

Schakowsky told The Daily the large turnout and excitement of attendees is an example of how these meetings can motivate action, even if that action is a show of solidarity.

“It inspires people,” she said. “They see that their neighbors and friends are all engaged and want to fight back. … I feel like this is more important than what you’re seeing even in Washington right now because it’s being noticed.”

In addition to Schakowsky, the event also featured speakers from various community groups such as the Latino Resources’ Latino Engagement and Action Council, the Council on American-Islamic Relations, Chicago Area Peace Action, Jewish Voice for Peace, the YWCA Evanston/North Shore and the Evanston/North Shore NAACP.

Speakers addressed topics ranging from their personal beliefs about the treatment of marginalized groups to what policies or national issues they opposed and how people can take action against what they don’t believe in.

Bringing community organizations and people together through dialogue was one of the event’s main objectives, said Laura Kochevar, manager of communications and development for Open Communities.

“There’s a lot of strength within the community itself,” Kochevar said. “One of the positives of this time in our country is that neighbors are talking to one another and we want to really encourage that.”

The meeting was designed to be an interactive experience as opposed to just a series of speeches, Kochevar said. During the two-hour event, audience members split into small groups multiple times to discuss their views.

Chicago resident Hilary Marsh, who attended the event, said she enjoyed participating in the small group discussions and felt inspired to continue fighting.

“I’m already doing as much as I have time and energy to do,” said the 58-year-old, who gave away homemade knit pink pussyhats, a feminist symbol which arose with the Women’s March, to meeting attendees. “My takeaway is don’t give up (and) don’t stop. It’s not necessarily to do something new, but it’s to not feel that my efforts are in vain.”