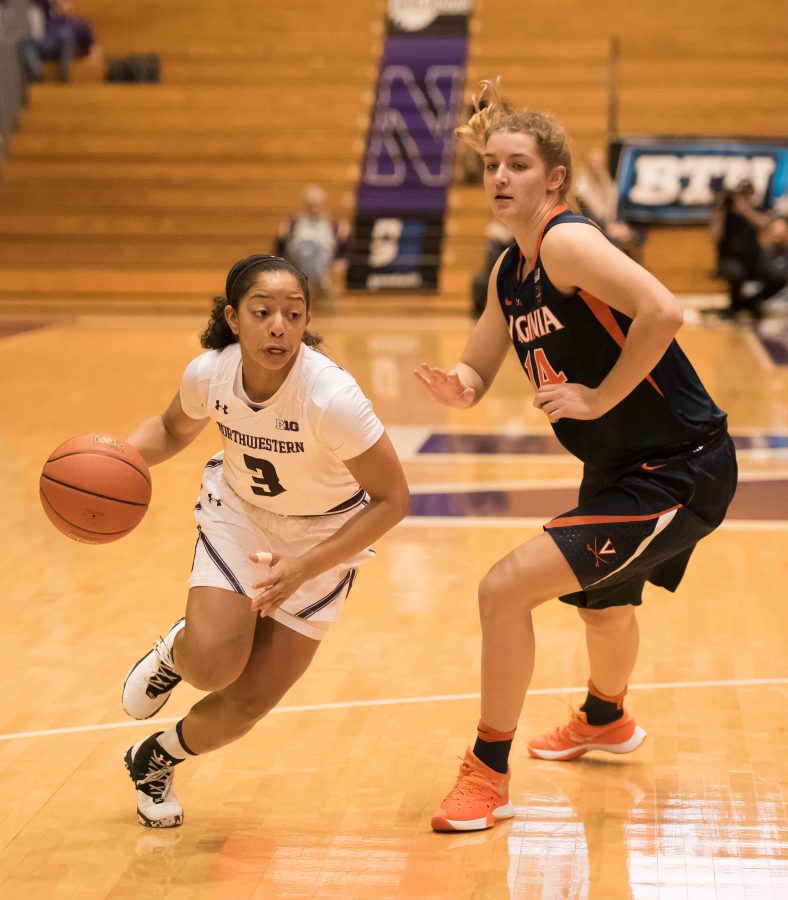 Ashley Deary drives to the hoop. The senior guard finished with 4 points as Northwestern struggled from the floor against Indiana.

With an opportunity to earn a resume-boosting win and separate itself from the middle of the Big Ten on Saturday, Northwestern fell flat.

The Wildcats (17-7, 6-5 Big Ten) came up short against Indiana (17-8, 7-5) 66-38 in part due to a stellar performance from Hoosiers guard Tyra Buss. The loss dropped NU from fourth place in the conference, which would ensure a double-bye in the Big Ten Tournament following the regular season, into a smorgasbord of teams hovering around .500 fighting for a top spot.

Entering Saturday, one game separated fourth through ninth place in the Big Ten, with the Cats ahead of the pack.

Offense came at a premium Saturday, as neither team shot particularly well. Buss was the only one from either team consistently making plays, as she led all scorers with 19 points.

Things started off slowly for both teams, as the Hoosiers led just 26-17 at halftime despite shooting just 30 percent from the field. NU’s 17 first-half points and 38 points overall both represented season-lows.

Indiana got off to a hot start in the second half, scoring another 24 points in the third quarter alone. NU continued to struggle, netting 11 points in the frame.

The Cats’ woes could be traced to the injury suffered by senior guard Christen Inman in NU’s last game against Indiana on Jan. 14. Inman appeared to injure her knee in the game’s final minutes after an opponent fell on her leg, and hasn’t started in any of the following six games, playing just a combined 65 minutes.

Senior forward Nia Coffey’s month-long cold streak persisted, as she led the Cats with just 9 points while going 3-for-13 from the field. Normally NU’s most consistent player, Coffey has averaged 13.6 points per game over the last six matchups — still solid but well below her season average of 19.0.

The Cats now will head to Minnesota on Monday for their second game of their three-game road trip. Monday’s game is a make-up after their matchup was postponed in early January.