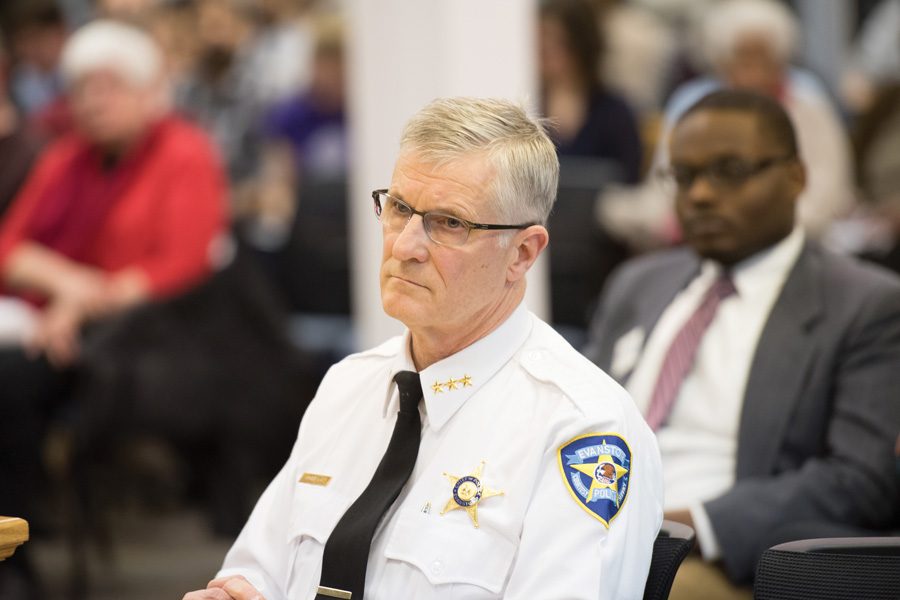 The Evanston Police Department began to consider implementation of body cameras in 2015, and started pursuing potential funding sources after Gov. Bruce Rauner formally legalized use of wearable cameras in August of that same year. In spring 2015, the city applied for a federal grant of more than $600,000 to establish wearable cameras for EPD, but their request was denied later that year.

City officials have said in years past that the program could cost about $400,000 initially to implement in Evanston. City manager Wally Bobkiewicz said there is not a “precise” dollar amount for the plan yet, but Evanston had money in its capital budget to fund the initial phase of the body camera rollout, which he said is set to begin no later than the beginning of July, he said.

Bobkiewicz added that the city was still pursuing grants to supplement the program’s funding.

Police chief Richard Eddington said much of the cost and organizational burden will actually come from data storage for body camera footage, as opposed to purchasing the devices themselves. Gloria Graham, UP’s deputy chief of police, said the details for storage had not been fully fleshed out, but she said she anticipated it might feature some combination of physical and cloud-based storage.

“The device on the officer’s chest is literally the tip of the iceberg,” Eddington said. “This is so much more complicated, and the data management will be the key issue going forward for both police departments.”

Whereas EPD hopes to have body cameras fully implemented by Jan. 1, 2018, UP will aim to establish the program by the beginning of next academic year, Graham said.

EPD began looking into body cameras over a year and a half ago, and Graham said they established a partnership with UP about 10 months ago.

The announcement of the camera implementation, however, comes on the heels of a broader conversation about racial bias in Evanston policing. The release last month of a video depicting the 2015 arrest of Northwestern graduate student Lawrence Crosby in connection with reportedly stealing a car that turned out to be his has made waves across the community, spurring dialogue about police practices.

Bobkiewicz said while discussions about these policy changes began long before the release of the Crosby video, his case contributed to the new reforms.

Bobkiewicz also referenced the November arrest of city clerk candidate Devon Reid, who was apprehended while petitioning for office in downtown Evanston, as another piece in the greater conversation around reform.

“This is an ongoing endeavor that Crosby is a part of and a facet of, but that’s not the only issue that’s being addressed here,” Eddington said.

Ald. Brian Miller (9th), who called publicly for the Crosby video’s release, said the cameras are a step in the right direction for EPD.

“I fully support the cameras,” said Miller, a mayoral candidate. “But at the same time, we’ve got to make sure we’re addressing what the cameras actually show.”