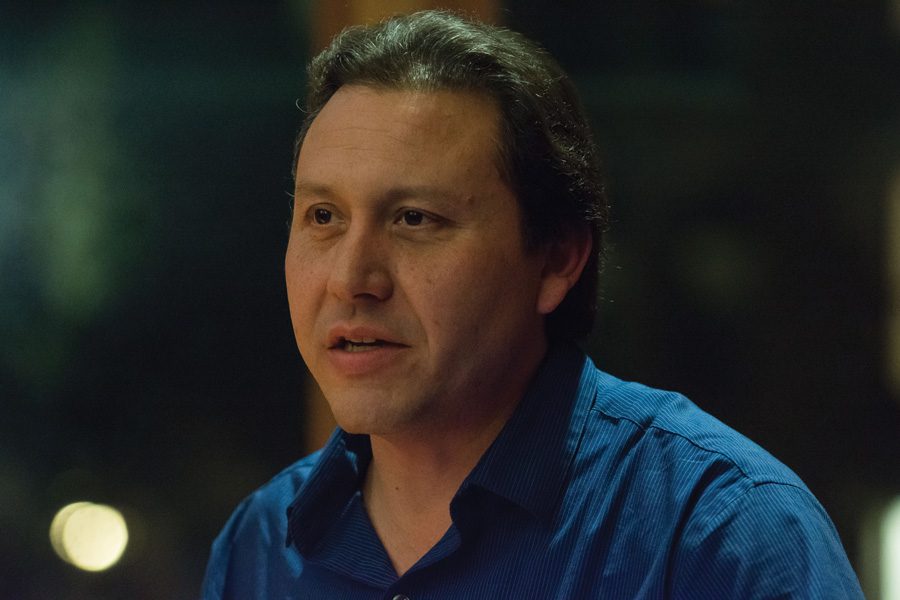 Al Eastman, a panelist and archery director for the American Indian Center in Chicago, discusses the power of divesting from banks that finance the Dakota Access Pipeline. The event, held in Harris Hall, also focused on the role of social media as a tool for political action.

At a panel presented by the Buffett Institute for Global Studies, Native American scholars and academics discussed methods for supporting Standing Rock, such as divestment campaigns and social media posts aimed at disseminating topics not covered by mainstream media.

“NoDAPL and the Future of Indigenous Organizing,” an event co-sponsored by the Native American and Indigenous Student Alliance, the Buffett Institute and several other groups centered on social justice, also examined the movement against the Dakota Access Pipeline — an underground oil pipeline project that could threaten Native water supplies — within a historical context.

Al Eastman, a panelist who is Sicangu Lakota, said divesting from large banks can send a message of resistance to institutions that finance energy companies focused on building the Dakota Access Pipeline and the Keystone XL Pipeline, a proposed oil pipeline that many worry could damage sacred Native sites. Eastman, archery director for the American Indian Center in Chicago, added that calling elected officials and demanding justice for marginalized groups can generate real change despite the misconception that small actions go nowhere.

Ninah Divine (Weinberg ’16), coordinator of the Native American and Indigenous Peoples Steering Group, said she helped Patrick Eccles, associate director of the Buffett Institute, select panelists after he reached out to her with the idea for the panel.

Divine, who is Cherokee, said the panel gave Native scholars the opportunity to share their work, research, experiences and thoughts on issues currently affecting Native communities. The event was held in Harris Hall.

“(The panel) builds a mutual relationship between Northwestern and Native communities in Chicago and elsewhere,” she said, “where we can elevate Native voices, and they can bring scholarship to our campus and educate our students.”

Panelist Kristen Simmons, an anthropology graduate student at the University of Chicago, said social media can give power to those who want to fight for Native issues but cannot physically be at Standing Rock. Simmons, who is Paiute, said these platforms can also serve as important tools for coalition building.

Still, though social media does have potential to enact tangible change, Simmons said it is vital to listen before taking action.

“It’s important for people to sometimes sit back and listen and see what’s happening before jumping in,” she said.

Lois Biggs, a Weinberg freshman who attended the event, said she was moved by the stories of panelists who encountered crowd control tactics like teargas and rubber bullets while demonstrating.

Biggs, who is White Earth Ojibwe and Oklahoma Cherokee, said panelists also provided a historical context for the #NoDAPL movement and specific ideas for standing with Native communities.

“Another thing that’s really important is just supporting and sharing the work of Native journalists themselves who are telling their own stories, and the stories of their communities, in really direct and impactful ways,” she said. “And I think that it’s really important that we continue to fight the fight at Standing Rock.”