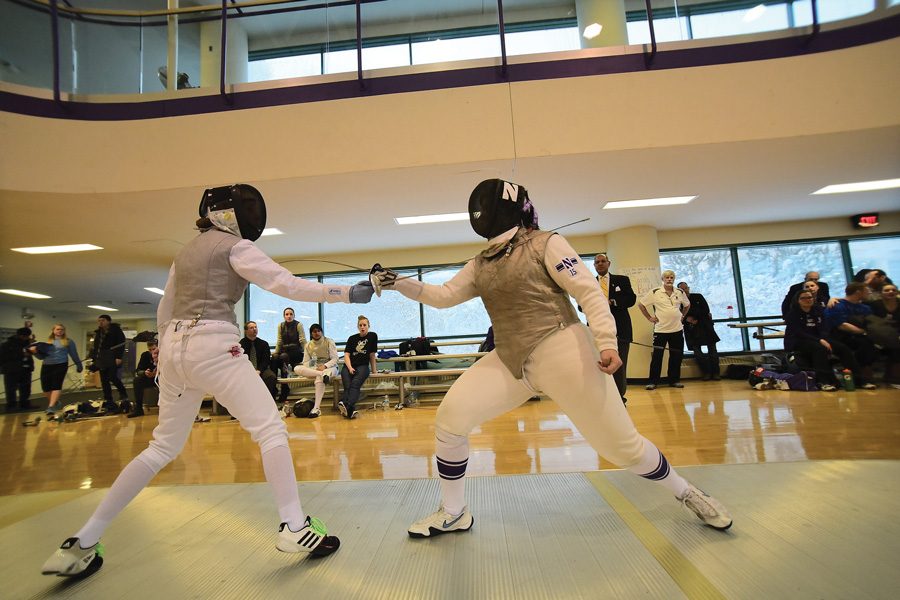 Senior Kimmy Fishman fences against an opponent. Fishman is one of 11 seniors for NU, which hosted its Senior Day in South Bend this weekend.

Despite a surprise win over an Olympian and an upset win over a top-5 team, Northwestern had an uneven weekend at NU Duals.

The Wildcats made South Bend their home as they hosted the event, which served as Senior Day for the No. 9 Wildcats’ 11 seniors. NU went 6-6 against a strong field that included seven of the top 10 teams in the country.

“It felt really great to do well against them and to beat them,” Oh said. “It definitely gave us a lot of confidence. That was a really important matchup for the weekend, just because we have struggled against other top-10 schools.”

Later in the day, the Cats faced a No. 2 Princeton headlined by 2016 U.S Olympian Kat Holmes. Freshman epee Pauline Hamilton shocked Holmes, handing the senior her only loss of the weekend. NU eventually fell by the narrowest of margins, 14-13.

Coach Zach Moss said he was very encouraged by his team’s performance against the Tigers.

“We lost 14-13 to a team that on paper is a national title contender,” he said. “We beat their epee team which features two members of the United States national team. …That was a really positive moment.”

The Cats faced six more teams Sunday, and notched a 3-3 record for the second-straight day. NU fell to No. 8 Temple, No. 5 Penn State and No. 3 Notre Dame, which they’d nearly beaten the previous weekend. However, the Cats tallied wins over Stanford and North Carolina, which both received enough votes to be in the top 20.

Senior sabre Alisha Gomez-Shah said she focused on trying to enjoy the emotions of senior day.

“It was a little surreal,” she said. “I was trying to just really enjoy the moment and capture being at Notre Dame. A lot of emotions were going through my mind, but it was really about being appreciative of my teammates.”

NU had numerous standout performances throughout the weekend. Sophomore foil Yvonne Chart went 8-1 on Saturday, including a 3-0 outing against Princeton. Gomez-Shah finished 6-3 on Sunday, with a 3-0 showing against Stanford and a 3-0 performance against Ohio State on the first day competition.

Oh went 7-2 on Saturday and said she had a memorable last home meet.

“It was a lot of fun,” Oh said. “Thankfully, senior recognition was towards the end of the day so I could reserve the emotional and nostalgic part of it until the end.”

Moss said that although the team is unsure of where its ranking will fall, it is focusing on the rest of the season.