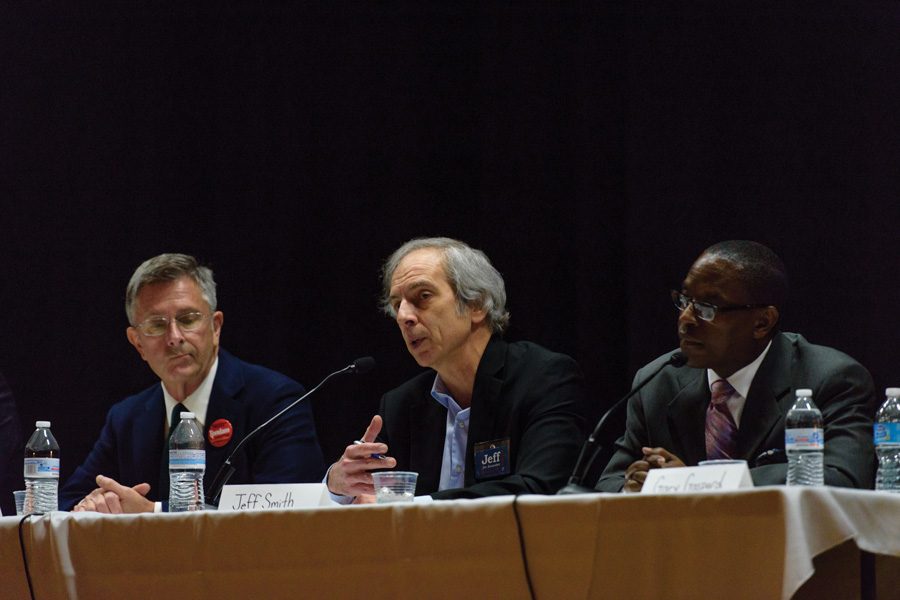 Mayoral candidate Jeff Smith speaks at an election forum. Smith said the city should “foster a culture of peace” to prevent gun violence.

Candidates for mayor and 5th Ward alderman emphasized the importance of affordable housing and anti-violence initiatives in Evanston at a forum Saturday morning.

The forum, hosted by the League of Women Voters of Evanston in the Lorraine H. Morton Civic Center, consisted of candidate statements and questions from the audience. More than 100 people attended the event, forcing it to move from a ground-floor conference room to the council chambers.

Ald. Brian Miller (9th), who is running for mayor against Ald. Mark Tendam (6th), Steve Hagerty, Gary Gaspard and Jeff Smith (Weinberg ’77), said one of his top priorities if elected mayor would be to increase police accountability.

“(We have to make sure) our officers are treating all our residents in a fair, equitable and just manner,” Miller said. “Our current process is not effective in addressing some of the complaints in our community.”

Miller — who called for the release of the arrest video of Northwestern graduate student Lawrence Crosby — emphasized the need for an independent police review board and re-examination of the complaint process. He also discussed need for further de-escalation training for police officers.

“We’ve created jobs for over 600 youths,” Tendam said. “There was actually no youth violence, or almost none to speak of, in the city of Evanston last summer. So we know jobs are critical.”

Smith emphasized getting to the root of the problem, finding out why violence happens and  allowing for the city to “foster a culture of peace.”

Both sets of candidates spoke about the need for more affordable housing in Evanston. Many candidates commended existing funds, but said there should be other strategies put in place to ensure homeowners can afford housing in the first place.

Affordable housing has been widely discussed at forums throughout the city during the lead-up to the election, and it continues to be one of the most important issues to candidates across the board.

Carolyn Murray, who is running for alderman against Carlis Sutton, Daniel Featherson, Robin Rue Simmons and Misty Witenberg, said reviving the “first-time buyer program” would help make sure housing is affordable for those trying to settle in Evanston.

The program was designed to help individuals purchase their first house in Evanston. The state of Illinois still has a similar program in effect, which combines a 30-year fixed rate mortgage with a $7,500 down payment assistance grant.

“The first-time buyer program, a program I benefitted from when I bought my house over 15 years ago, is no longer existent,” Murray said of the city program. “We’re looking at initiatives, and building upon initiatives, that the city (had diminished or phased out).”

Other 5th Ward candidates spoke about implementing a “liveable wage” in Evanston to help with economic development and housing, as well as increased job training and a move toward competency-based hiring.