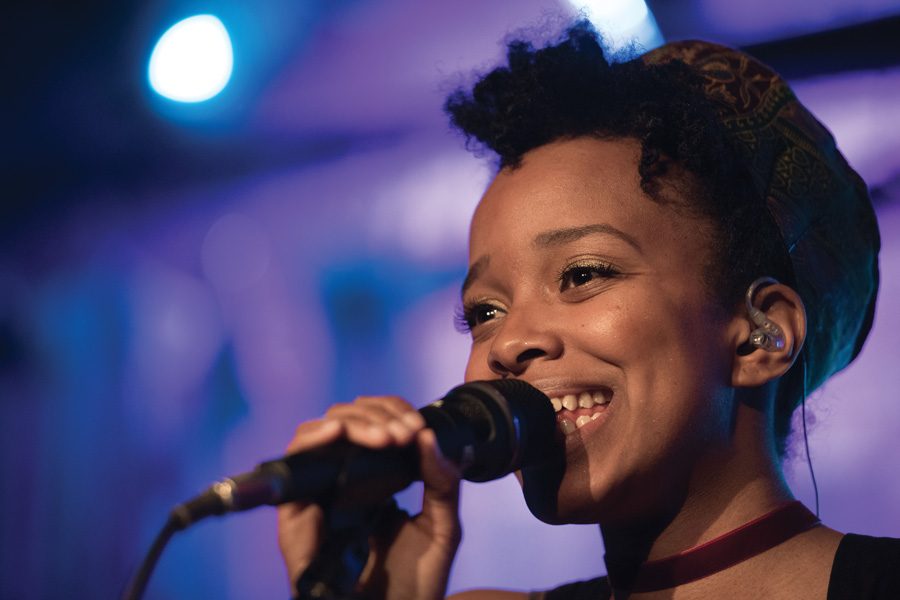 Chicago-based singer Jamila Woods performs at Thursday’s A&O Chicago Benefit. The funds from the concert will be donated to AMASE.

Rapper Noname, who was born and raised in Chicago, performed before a sold-out crowd at Evanston SPACE, 1245 Chicago Ave., in the first-ever A&O Chicago Benefit. Noname took advantage of the intimate venue to converse casually with fans during her set, even removing her shoes after she performed her first song of the night.

Designed to highlight Chicago-based artists, Chicago Benefit also featured R&B artist Jamila Woods and comedian Rebecca O’Neal. A&O co-chair Will Corvin said the event aimed to show Northwestern’s campus what is going on in the city to the south.

“When you apply to this school you hear a lot about getting a ‘Chicago experience,’ and we just really wanted to bring that to people,” the Weinberg senior said.

O’Neal kicked off the night with jokes about a range of topics, from her love life to President Donald Trump.

Woods followed O’Neal, opening her set with her song “VRY BLK,” off her first full-length album “HEAVN,” which was released last year. She also performed the popular single “Sunday Candy,” on which she’s featured with fellow Chicago artists Chance the Rapper and Nico Segal.

“It’s something about all-ages shows; they just have so much energy and intensity,” he said. “It makes you want to play.”

Noname’s performance capped off the evening, featuring songs from her 2016 debut release “Telefone” as well as some of her work with Chance the Rapper, Mick Jenkins and other Chicago-based artists.

All ticket proceeds went to the Academy of Music and Arts for Special Education (AMASE), a nonprofit organization that provides music and education programs to special needs children. Brandon Lin, the group’s co-operation director and Bienen junior, said AMASE hopes to launch a summer camp with the funds raised by event.

SESP sophomore Alec D’Alelio said Thursday’s show was a new iteration of past A&O Benefit concerts. Corvin told The Daily last month that Benefit was moved because A&O’s executive board felt there was too much programming concentrated in Spring Quarter.

“It has never had an incredible turnout,” he said. “In the past … the Benefit show that A&O has done was in the spring, and it’s been more geared toward indie rock.”

Chicago Benefit was also better-attended than most past Benefits, Corvin said.

Communication freshman Jacquelyn Tepper said she was drawn to the event after discovering Noname and Woods through Chance the Rapper’s music.

“I don’t know what else to describe it as than beautiful, especially when Noname stopped and had everyone sing together,” Tepper said. “It was that moment that I was like, ‘This is my Northwestern; this is what I want to do.’”