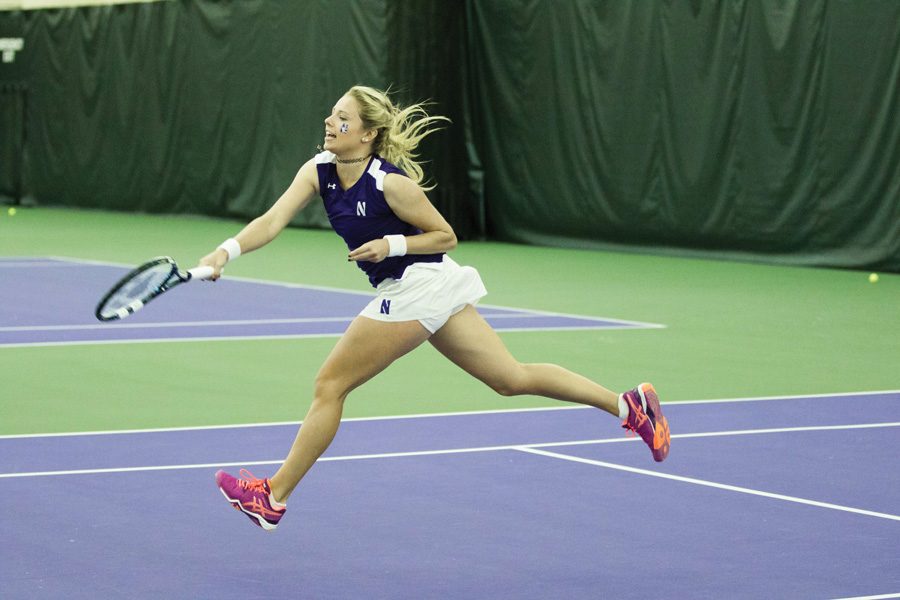 Alex Chatt chases the ball. The junior and the Wildcats are seeking revenge at Duke this weekend.

After losing a heartbreaker to Duke last weekend, the Wildcats be looking for revenge when the two teams meet back up Sunday.

“I’m personally not a big fan of that word (revenge), but in this instance it’s something we have to try to muster,” coach Claire Pollard said. “It’s fantastic for us. We’d like to get the bitter taste out of our mouth. It’s a golden opportunity. At the same time it’s a challenging one.”

For No. 23 Northwestern, (4-1) the No. 10 Blue Devils are only half of a tough road weekend. On Friday, the Cats take on No. 9 Vanderbilt before making the trip back to Durham for a rematch with Duke (3-0).

Last Sunday, NU was set for a statement win at Duke to clinch a spot in the ITA National Championships, but No. 14 Meible Chi stormed back from a 5-2 deficit in the third set at No. 2 singles to defeat junior Maddie Lipp in a tiebreak and seal the match for Duke.

Pollard said conquering that disappointment is critical in the rematch.

“The psychological component of a tough loss and then having to get back to it at a really high level will be challenging,” she said.

After snagging the doubles point, only two Cats won their singles matches against Duke: juniors Erin Larner and Alex Chatt, at the No. 1 and No. 5 spots, respectively.

NU’s singles depth has been an important part of their early-season success, but Duke has three top-100 ranked players at the No. 2 through No. 4 spots in the lineup, and the Cats have none. Sophomore Lee Or, who was overwhelmed in the first Duke match and lost 6-1, 6-2 at the No. 4 spot, said she expects the match to go differently this time.

“I’m looking forward to it,” Or said. “First of all, I’m going to be fresher physically, and I’ll be more aggressive, working on my backhand. I’ll find my way to the net.”

Vanderbilt should not be overlooked either, especially because the Commodores swept through their regional tournament last weekend, defeating Virginia Tech and Kansas 4-0 in each match.

The top of Vanderbilt’s lineup is their strength, and they boast three top-30 players at the top three singles spots including No. 2 Astra Sharma.

“Vanderbilt’s a really good team, and we’re gonna have to play at a really high level,” Larner said. “We’re all going to have to show up and put in a team effort.”

That team effort was seen last weekend in the Cats’ win against Tulsa, when they bounced back from their only doubles point defeat of the season to win four singles matches.

Still, there have been recurring holes in the NU’s lineup. Lipp has yet to pick up a singles win this year, and senior Brooke Rischbieth and freshman Nina van Oost both lost at No. 6 last weekend as the Cats search for an option to replace injured senior Jillian Rooney. That will need to change if the result against Duke is to change this weekend.