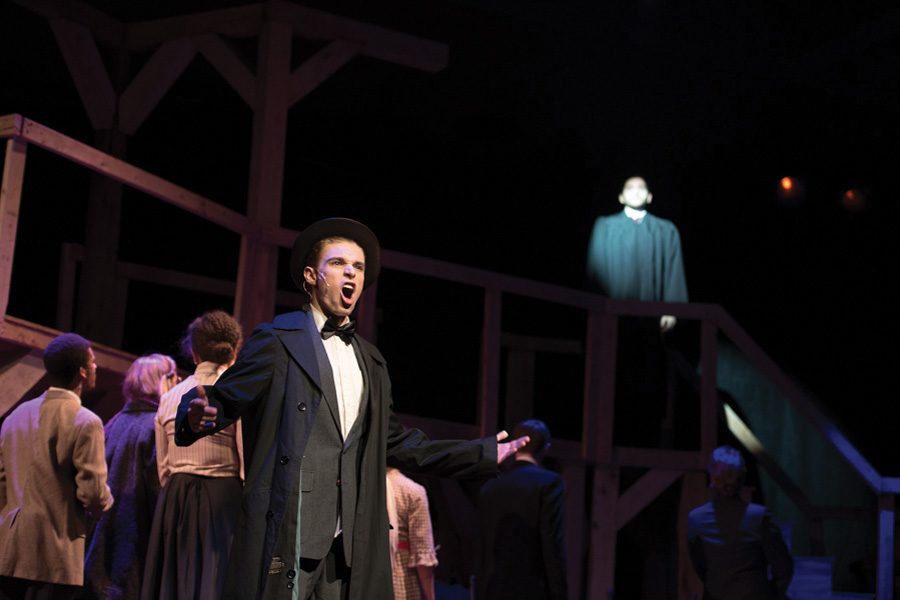 The cast of Parade reopens the case of Leo Frank in a historical musical. The Jewish Theater Ensemble's winter main stage production opens Friday in the Louis Room in Norris.

The Jewish Theater Ensemble will revisit a historic murder trial for its winter musical this weekend.

“Parade,” which opens Thursday in the Norris University Center Louis Room, centers around a true story about the 1913 rape and murder of 13-year-old Mary Phagan in Atlanta, Georgia. The musical follows the life of Leo Frank, the town’s Jewish factory superintendent, after he is accused of the crime and must fight for his innocence.

The musical is in part a murder mystery, a courtroom drama and a love story, said director Michael Herwitz.

Producer Casey Watson said the musical was chosen for its powerful dialogue, relevant messages and faith-based storyline. The story touches on themes ranging from populism to marital conflicts, making it widely relatable, the Communication sophomore said.

“It’s going to touch every single person who walks in and watches it in some kind of different way,” Watson said. “We hope that people come in and find something for themselves.”

Julie Busch, who plays Frank’s wife, Lucille, said she felt a sense of responsibility in accurately portraying a historical figure. Over winter break, Busch, Herwitz and Communication junior Adam Brody, who plays Frank, visited a Leo Frank exhibit at the Museum of Jewish Heritage in Manhattan.

“Seeing the photos of (Lucille and Leo Frank) and the letters that (Lucille) wrote to the governor to get him to reexamine her husband’s case, there’s a pressure but in a good way,” the Communication senior said. “You feel a sense of responsibility to tell the story in a respectful and appropriate way.”

Though the production deals with difficult topics, the musical aspect provides an additional layer of emotion that aids in storytelling, Busch said.

“In my duet with my husband, you have these beautiful legato lines that I think reflect the love growing between them,” she said. “Ultimately it’s a story of love and hope, at least, from my character’s perspective.”

As the story focuses on Frank’s fight for innocence, the “intense, dissonant group numbers” help convey the feelings of hostility and suspicion, which are brewing in Frank and his wife’s community, Busch said.

Because the Louis Room is not a traditional theater, outfitting the venue to fit the needs of the musical was also an obstacle, Watson said. A fully functioning stage had to be constructed in addition to props, costumes and other basic production needs, she said. This responsibility fell was helmed by SESP junior Prateek Singh, the show’s co-producer.

“(Singh) was really passionate about creating a world in the Louis Room for people to walk into and feel like they were a part of,” Watson said. “It’s a very atmospheric show.”

Although it is about a century-old case, Herwitz said the show aims to emphasize universal themes of diversity and “otherness,” which have become especially relevant in the wake of the presidential election.

“I hope people let themselves be taken away with the story,” he said. “I hope when they leave, they’ll think about the world, how it stands right now and what their place in that is.”

Correction: A previous version of this story misstated the opening date of “Parade.” The musical opens Friday. The Daily regrets the error.