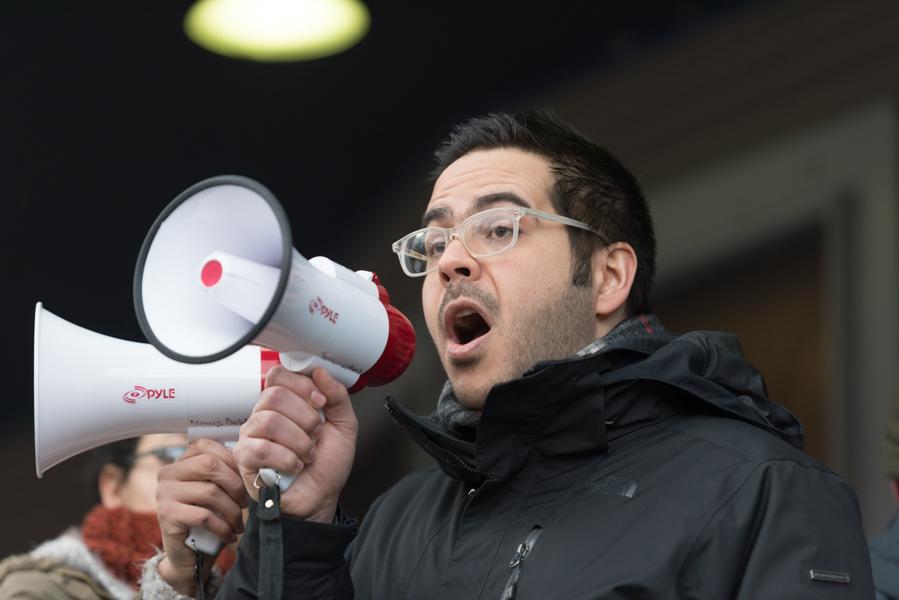 Azza Akasha, a Feinberg School of Medicine graduate student, always imagined that her first interview with a reporter would be about a discovery she had made or a medical breakthrough she had done.

“Anything,” Akasha said, “but not my nationality.”

Akasha, a Sudanese citizen, studies at Northwestern on an F-1 visa. Sudan is one of the Muslim-majority countries targeted in an executive order President Donald Trump signed Friday, which also bars citizens of Syria, Libya, Iran, Iraq, Yemen and Somalia from entering the United States for 90 days — a timeline that could be extended with another motion. The order also blocks refugees from entering the country for 120 days and prevents Syrian refugees from entering indefinitely.

Since Trump signed the order, the University has attempted to organize a response and provide resources for students, faculty and staff who are citizens of those countries. Currently, there are 71 international students and scholars who hold citizenship in an affected country.

But that has not assuaged the concerns of students who read the news with the knowledge that they or their families could be affected by the Trump administration’s actions.

Third-year computer science Ph.D. student Neda Rohani, who is an Iranian citizen studying on a student visa, said she came to the United States in 2012 because there were better job opportunities here than in Europe or Iran. She said she had hoped to work in the country for several years after graduating.

Above all, though, she said she had heard from friends who had studied at American universities that the United States was the most welcoming country for foreigners.

Rohani now faces a number of unanswered questions about her future in the United States. Her husband, who is an Iranian citizen studying at the University of Massachusetts Amherst, has a student visa that will soon expire. Rohani fears her husband will not be able to apply for an OPT — a permission to remain in the U.S. after the end of an F-1 visa — and that they will be separated when he finishes his studies.

“For couples, the problem is doubled,” Rohani said. “It’s affecting families. I don’t know if this law will not change. I don’t know what will happen to the families who are (already) living here.”

Even before the executive order, many Iranian students in the United States did not see their families for long periods of time, said postdoctoral scholar Roozbeh Rezakhani, an Iranian citizen with an OPT.

Rezakhani said he once went four years in the United States without seeing his family. When he did travel home, he was taking a risk because he needed to reapply for an American visa in an embassy outside of Iran, he said. There has not been a U.S. embassy in the country since 1979.

Now, it is impossible for Iranian students to leave the country to visit family or have their family visit them in the U.S., he said.

“You don’t see your family for a long time. That’s not a regular thing,” Rezakhani said. “For many years apart from your family, you need to keep up your motivation, keep working hard. That’s a very hard thing to do.”

For Akasha, the executive order also hinders her from returning to Sudan to help advance her home country’s medical services with her Northwestern education.

Akasha, who had already been practicing oncology in Sudan, declined offers from universities such as Oxford and Leeds in the United Kingdom to come to Northwestern, as it was the only oncofertility program of its kind. She hoped to bring back the skills and technology she learned at NU to improve women’s health care back home.

Hours before the executive action was signed, Akasha finalized plans for a conference scheduled for February 2018 in Khartoum, Sudan, with the director of her program to share their research with Sudanese medical professors. Akasha’s program ends in summer 2018, and now she does not know if she will be able to travel to the conference and complete her studies.

“This would have meant so much to my professors back home, to our patients back home,” Akasha said. “This is new technology that’s not really anywhere except a couple of clinics internationally, so I know this would have changed many, many lives.”

Some students said after the initial shock of the executive order, they did not feel as though the administration was giving them enough support. Rohani said she met with the International Office on Tuesday and felt there was not enough information from or organization within the administration. She said the International Office could not answer many of her and her colleagues’ questions about their visa statuses.

Rohani said her husband received considerably more organized support from the administration at UMass immediately after the executive order was signed and that she was frustrated by how slow Northwestern’s response was.

“(UMass students) have received several emails from the International Office, and they have had several events and meetings with students who have questions,” Rohani said. “But Northwestern has offered nothing compared to the universities in Massachusetts.”

The International Office is not currently focused on visa resources because of the uncertainty of the executive order’s future, said Ravi Shankar, director of the International Office. Once the first 90 days have passed, the University will be able to determine its course of action in providing more concrete services, Shankar said.

Shankar said the office is now partnering with the Pritzker School of Law to provide support and legal counsel. In addition, the office plans to work with Counseling and Psychological Services to offer meetings and talks so students have someone to speak to who understands their situation.

English Prof. Brian Edwards, director of the Middle East and North African Studies Program, said the effects of the order will be broad and potentially put future programs and research at risk. Additionally, the order will affect individual students and faculty members who may be at Northwestern on a visa or who have planned to travel abroad as part of their work.

“There’s a direct impact on the kind of research and work that some of our students have come here to do,” Edwards said. “We’re in a situation where we don’t know how endangered our colleagues, students and friends are — so it’s as if we entered a McCarthy-like era.”

He added that there are already students and faculty whose plans have been impacted by the order but said many were expressing caution about speaking out due to concerns that their visa status would be further jeopardized.

Rezakhani said fellow students have been supportive of the impacted international students. He and Rohani are both part of the the Iranian Student Association, an organization of mainly graduate students centered on Iranian student life. The group will co-host an event at the Rock on Feb. 9 to protest the executive order as part of a nation-wide demonstration.

Third-year applied physics Ph.D. student Amir Maghsoodi, who was born in Iran and has dual Iranian and American citizenship, is also a member of IRSA. He said he was encouraged by the number of Iranian and non-Iranian students who helped organize and RSVP’d to the event.

“People are responding in compassionate, loving and understanding ways,” Maghsoodi said. “That’s the message we want to take to the administration — that we want to get that sort of support institutionally.”

Akasha also said her colleagues and mentors at Northwestern have been helpful and supportive since the executive order was signed. She said she felt lucky to have to go through this time at Northwestern and that signs of support such as an email from Schapiro or the dean of Feinberg reassured her that the University has “got my back.”

Ultimately, Akasha emphasized that she is not a political person. Since she was 3-years-old, she studied to become a doctor, she said, becoming an undergraduate student at 15 and working to improve health care in her country.

“I hope people stop seeing me for my nationality, my color, my religion — whatever it is — and they start seeing me for the doctor I am,” she said. “I was born Sudanese. What am I supposed to do about it?”