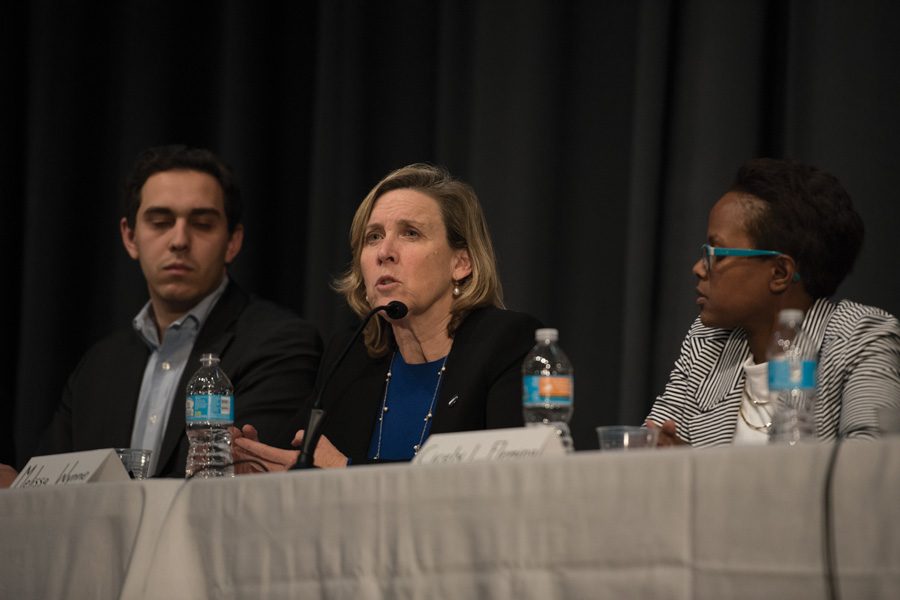 Aldermanic and city clerk candidates spoke about the importance of equity and civic engagement at a forum Tuesday ahead of the upcoming elections.

The forum at Chute Middle School was hosted by the Organization for Positive Action and Leadership, an Evanston group that aims to educate voters and encourage civic engagement. The event featured five aldermanic candidates: three from the 3rd Ward and two from the 9th Ward. City clerk candidate Devon Reid also attended.

Candidates answered moderator and audience questions, and responded to inquiries about their opinions on President Donald Trump’s recent executive orders.

Over the past week, Trump signed executive orders issuing a travel ban on citizens from seven Muslim-majority countries, suspending all refugee admission for 120 days and blocking entrance for Syrian refugees indefinitely. Trump also signed an order to pull federal funding from sanctuary cities such as Evanston.

The candidates unanimously supported Evanston’s “welcoming city” status and affirmed that regardless of federal funding, the city would continue to run.

“What we need to do is double-down on our progressive values here in Evanston,” Reid said.

Ald. Melissa Wynne (3rd), who is running for reelection, said for the federal government to strip funding, the city would have to actively withhold legal information pertinent to an investigation. She said that is unlikely to happen.

Other candidates put forward proposals on how to help those potentially affected by the orders. Cicely Fleming, who is running for 9th Ward alderman, said the city needs to provide translation services and clearly articulate residents’ rights.

“We need to make sure what we’re doing on paper, in our ordinance, is reflective of what we’re explaining to our police force, our church leaders, those who have a connection to our immigrant population,” Fleming said.

Shawn Jones, who is also running for 9th Ward alderman, emphasized the need for lawyers to provide pro-bono legal representation to help immigrants.

Reid suggested that Evanston follow the example of other cities by implementing municipal IDs. These would allow people lacking other forms of identification to access basic services like banking, he said.

The candidates all also emphasized the importance of affordable housing and equity.

Alex Block, who is running for 3rd Ward alderman, said developers should be required to include affordable housing options in their projects.

“Thanks to public pressure, thanks to conversations in the community, those initiatives are going to move forward,” Morgan said. “We need to have folks on City Council who are going to continue to press to support affordable housing even if those conversations go dormant in the future.”

Jones agreed that affordable housing should be a priority and said it was key to preserving the character of Evanston and its diversity.

Wynne spoke to the change in the inclusionary housing ordinance that City Council voted on in 2015, which was aimed at increasing the amount of available affordable housing.

Elections in Evanston for these positions will take place on April 4.