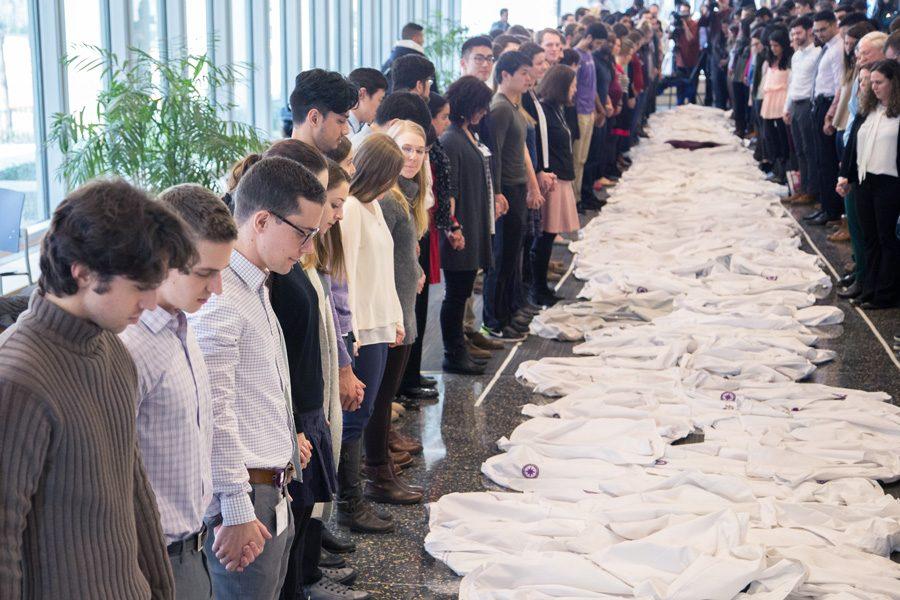 Feinberg students and faculty lay down their white coats in support of the Affordable Care Act. The demonstration was held in Chicago on Monday.

In an act of solidarity with Americans fearing the loss of their health care, students and faculty at the Feinberg School of Medicine staged a demonstration Monday urging state representatives to maintain coverage in Illinois.

Amid increasing tensions surrounding President Donald Trump’s opposition to Obamacare, more than 150 people removed their white lab coats and laid them down into a “carpet” on the floor of Robert H. Lurie Medical Research Center in Chicago. The event hosted four guest speakers — including physicians, a representative from the office of U.S. Sen. Dick Durbin (D-Illinois) and a Feinberg student — all of whom voiced their support for the Affordable Care Act.

Event co-organizer Andrea Henricks, a second-year Feinberg student, said she and her peers were motivated to plan the demonstration after she organized a phone bank to help people call their senators about the ACA. The student organizers wanted to do something bigger to show their support for maintaining health care coverage, she said.

“The idea was kind of a symbolic laying down of our white coats to make a white coat carpet, saying that we support our patients and we’re not going to kind of pull the carpet from under them,” Henricks said. “And we hope that our elected officials will help with that.”

The event was one of many public demonstrations held nationwide Monday for “Do No Harm Day,” said co-organizer and second-year Feinberg student Michelle Gorecki. The day was coordinated and publicized by Protect Our Patients — a grassroots movement by medical students for equitable health care access — for schools to come together in protest of Congress’ potential repeal of the ACA.

“I got into medicine to serve the people who need it the most, and the ACA has allowed the neediest patients to access care,” Gorecki said. “Without the ACA, I’m worried that people with pre-existing conditions will be dropped from their health plans … That’s part of why we’re asking the Illinois legislature to make changes to protect our patients.”

In addition to organizing the event, the group of Feinberg students also sent a petition to other medical schools in Illinois calling on local officials to protect patients in the event of the repeal and replacement of the ACA.

Jordan Rook, another organizer, said being in contact with students who want to advocate for similar causes at other universities has been one of the most “powerful things” to come out of their efforts. The second-year Feinberg student said having a network of active medical students will facilitate potential events in the future and opens up many more possibilities.

The petition currently has more than 700 signatures from 11 medical schools, and will be taken to Gov. Bruce Rauner and other state officials when it exceeds 1,000 signatures, Rook said. It is important to engage with local and state legislatures while fighting for national change, he said.

“That’s where we, as medical students, can have the biggest impact because no one’s looking at this right now,” Rook said. “We’re all looking at the national stage, (but) we need to protect our patients here in Illinois.”

Henricks said she and the event’s other organizers hope to plan more events in Chicago for medical students and health care professionals in the future.

Planning Monday’s protest was an affirming experience that students “care so deeply about their patients,” Gorecki said.

“The student voice needs to be heard because we are the next generation of physicians and Illinois needs us to serve patients here,” Gorecki said. “I’m so proud to have this many peers be this passionate about health care policy and access to care.”