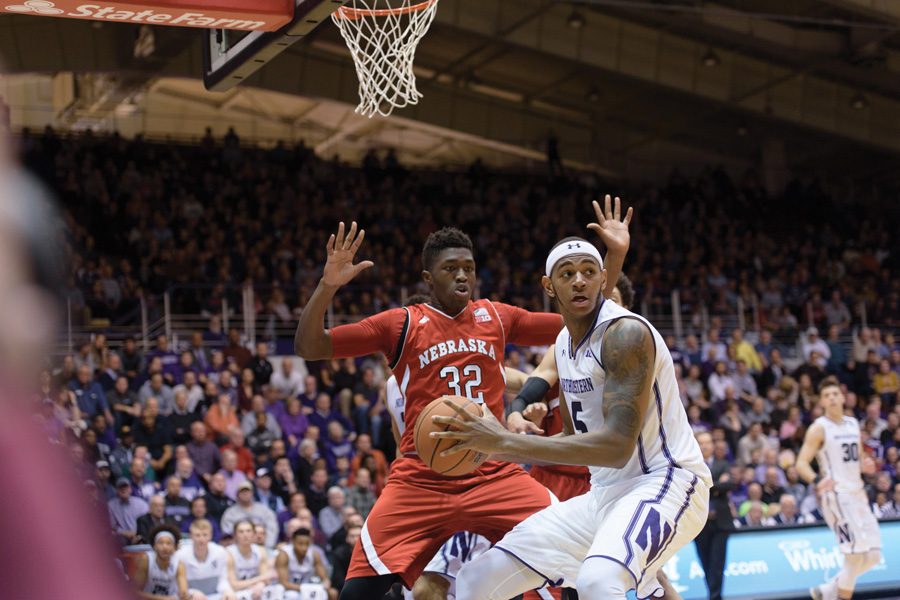 A series of explosive plays in the final minutes ignited a crowd of 7,108 at Welsh-Ryan Arena, highlighted by a fastbreak alley-oop from junior guard Bryant McIntosh to sophomore forward Vic Law with 4:38 to go.

The bucket, which came off a McIntosh steal, was part of a late 18-3 run that buried the Cornhuskers.

“When Bryant got it, my eyes kind of lit up,” Law said. “Could you hear anything after that dunk?”

Law posted a team-high 20 points despite a quiet first half. But it was sophomore center Dererk Pardon who stole the show for NU, tallying 19 points and 22 rebounds in a career effort.

Pardon has consistently impressed against Nebraska. He scored 28 points and posted 12 rebounds against the Cornhuskers in his Big Ten debut last year and pitched in an efficient 13 points when the two teams met earlier this season.

“It must be something about the color red,” coach Chris Collins said. “I’ve got to figure out a way where he thinks every team we play wears red.”

The performances from Law and Pardon allowed NU to thrive despite struggles from McIntosh and junior guard Scottie Lindsey, who was bothered by back problems and lacked his usual “balance and pop,” per coach Chris Collins.

Lindsey scored a season-low 5 points, and McIntosh managed just 9 on 3-of-13 shooting. With Nebraska keying on Lindsey as well as Law, and succeeding in shutting down the Cats’ wings for much of the game, NU went to work in the paint against a Nebraska team without injured leading rebounder Ed Morrow.

The Cornhuskers never truly seemed comfortable against the Cats, though they did hang with the hosts for much of the game. After NU jumped out to a 12-6 lead thanks to quick starts from Law and Pardon, Nebraska used a run to take the lead seven minutes into the contest. Nebraska hung onto the lead for stretches in the first half, but never extended it to more than 2. NU eventually pulled ahead and took a 32-29 lead into the break.

In the second half, the Cats found their legs offensively and never trailed. Law dropped 14 points after hitting just two shots before halftime and Pardon continued to roll, connecting on 5-of-6 shots from the floor. All told, the Cats put up 41 points in the second half, putting away Nebraska with the dominant run in the final minutes.

Nebraska coach Tim Miles said his team’s inability to get defensive stops against NU’s high-powered offense made the difference in the game.

With each passing win, NU gets closer to making Miles’ words a reality.

Thursday’s victory gave the Cats five straight Big Ten wins for the first time since the 1965-66 season. To extend that streak, they’ll likely need to be at their best when they face Indiana at home Sunday.

“Every win in this league is really tough,” Collins said. “Got two days to get rested up and get ready for a high-powered, explosive Indiana team.”