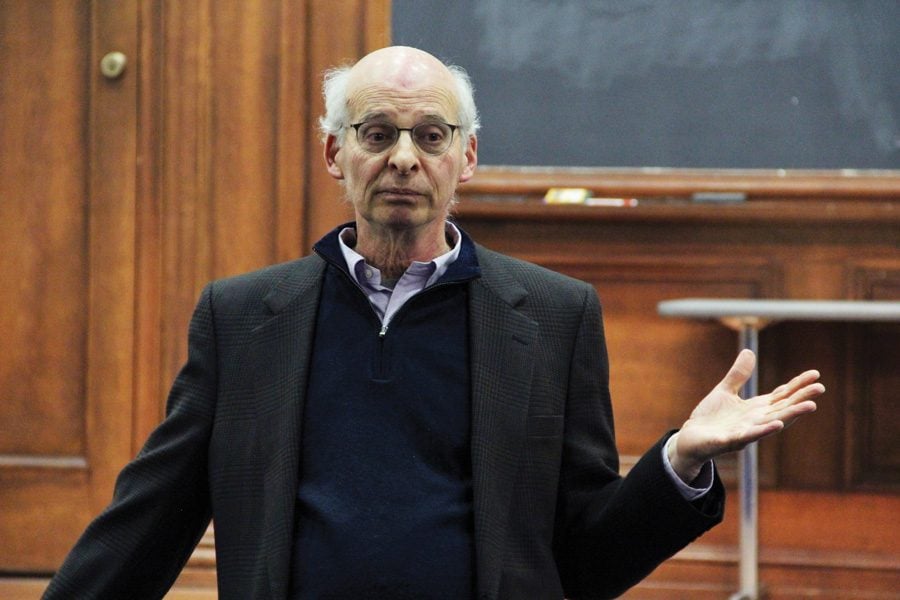 Richard Baehr, chief political correspondent for American Thinker, speaks at an event hosted by College Republicans and the Tannenbaum Chabad House. Baehr discussed the role of Israel and Palestine following Trump’s inauguration and the roles of previous administrations in the region.

Political correspondent Richard Baehr spoke Wednesday about the future of Israel after the election of President Donald Trump and the differences between the Obama administration and Trump administration in their attitudes toward Israel.

Baehr, who is the chief political correspondent for American Thinker, also spoke about the role of Trump’s advisers in shaping policy at the event co-hosted by College Republicans and the Tannenbaum Chabad House. The discussion also explored the history of Israel and Palestine.

Rabbi Dov Hillel Klein, a co-organizer of the event, said he invited Baehr to speak at the event because of Baehr’s involvement researching the conflict and its implications on Trump’s presidency.

“(It’s) important as we’re transitioning to a new administration to really understand what that administration is doing vis-à-vis the peace process,” Klein said.

However, until Palestine acknowledges the existence of Israel as a sovereign state, it is impossible to conduct bilateral talks or reach a solution, Baehr said. He told The Daily that Mahmoud Abbas, the Palestinian president, and other Palestinian politicians have grown so entrenched in their resistance to Israel that a two-state solution –– or any solution –– seems out of reach.

“You have to understand how the other side views the conflict and … put yourself in their shoes and understand why they’re willing or not willing to do a deal,” Baehr said.

He said one major difference between the Obama and Trump administrations is a change in attitude toward Israel. While Obama sent clear signals by placing his first call as president to Abbas, Trump is more likely to embrace Israel like former presidents, he said.

Though he is “unsure” what will ultimately become of Israel under Trump, Baehr said he doesn’t see the possibility for negotiations on the horizon.

Klein largely agreed with Baehr, but said Trump’s presidency has the potential to spur discussion between the two sides.

“Everybody wants peace,” Klein said. “(Baehr is) pessimistic that we can actually get there, but I think … that this administration has a better chance of getting the two sides to really talk to each other.”

Baehr also spoke about Trump’s personal advisors, who he said will play a much larger role in making key decisions than past presidents’ advisors have. He added that because Trump heavily values loyalty, he is also likely to give more power to Jared Kushner, his son-in-law and key strategist in his winning campaign.

College Republicans treasurer David Donnelly, a McCormick junior and co-organizer of the event, told The Daily that encouraging attendees of all political affiliations –– not only Republicans — is important to spur more nuanced discussions. He described issues regarding Israel and Palestine as “dynamic” and relevant to many demographics.

Weinberg freshman David Graves said the event provided exposure to various stances on the issue. Baehr’s inclusion of Israeli-Palestinian history and specifics about recent policies from previous presidential administrations helped him gain a more solid grasp of the topics, he said.

“Any time I hear a speaker talking about things that are relevant with changes in government today, it’s beneficial to go and listen to what people have to say regardless of whether or not you agree,” Graves said.