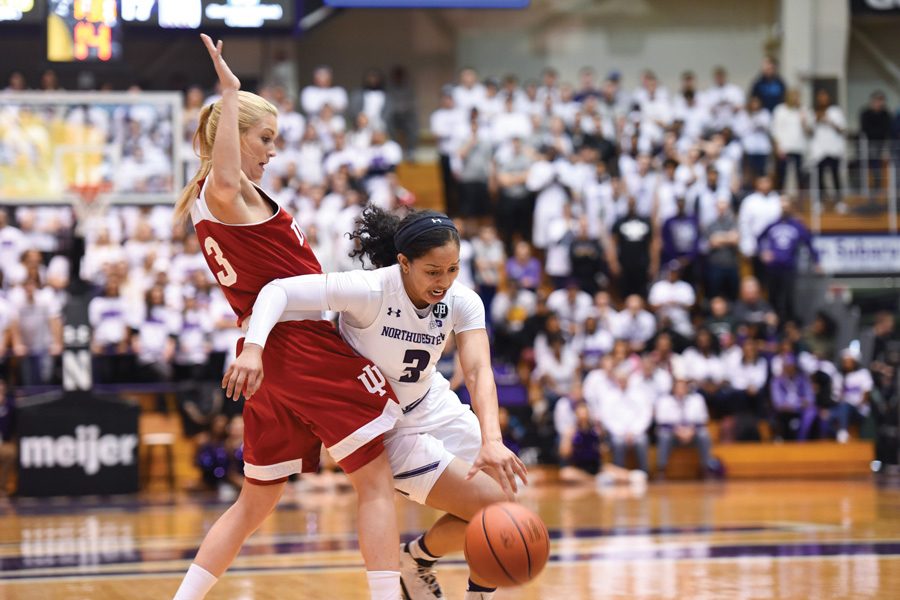 Ashley Deary attempts to evade a defender. The senior guard made just one field goal in the loss to Michigan.

Wednesday was anything but Northwestern’s night.

“I thought we did a great job in the third and fourth quarter tonight,” coach Joe McKeown said. “We’re a team that, you know, we’re streaky. We missed a lot of shots tonight — layups, free throws — things that great teams, which we aspire to be, take care of.”

From the get-go, the game was a struggle. The Cats quickly fell behind 10-2 in the first quarter but managed to cut the Wolverines’ lead to 14-9, the closest the score would get for the remainder of the contest.

By halftime, Michigan had already put the game well out of reach, doubling up on NU with a 41-19 lead at the break thanks to dominant performances from guards Katelynn Flaherty and Kysre Gondrezick. Flaherty, who entered the game as the Big Ten’s No. 3 scorer, tallied 14 points in the first half while Gondrezick chipped in with 11.

The second half did not get much better. Michigan kept its foot on the gas pedal despite NU switching to a zone defense to try to keep Flaherty in check. Flaherty and Gondrezick finished with 20 and 22 points, respectively.

“By the time I felt we got in a pretty good position, they just kept making tough shots,” McKeown said. “We just didn’t go a very good job of guarding the right people the way that we thought they should be guarded.”

The Cats were once again without senior guard Christen Inman, who missed her second-straight game after getting injured toward the end of NU’s game against Indiana. However, sophomore forward Pallas Kunaiyi-Akpanah, who was a prominent contributor last season, played in her first game since Dec. 22.

In their previous contest against Michigan State, the Cats managed without Inman thanks to standout performances from Deary and sophomore forward Amber Jamison. But with Deary going 1-of-8 from the field, and Coffey struggling again after her 66-game double-digit point streak was snapped in last Tuesday’s win over the Spartans, NU couldn’t find any answers.

The lone bright spot for the Cats was Jamison. Starting for the third consecutive game, Jamison totaled 16 points, pacing NU along with Coffey, who also scored 16 but shot just 30 percent compared to Jamison’s 63.6 percent.

As the Cats try to return to the NCAA Tournament for the second time in three years, a win over Michigan would have boosted their resume. Entering Wednesday night, NU didn’t have a Top-50 RPI win, but they had a chance against to pick on up against the Wolverines, who are ranked No. 34.

Instead, the Cats will look elsewhere to solidify their tournament credentials, beginning with an away tilt against Rutgers on Sunday.

“Last week when we beat Michigan State, when we beat Indiana, we made all the right decisions, made free throws, made layups, made the extra pass,” McKeown said. “Tonight was a hiccup but hopefully we’ll get back to playing that way Sunday.”