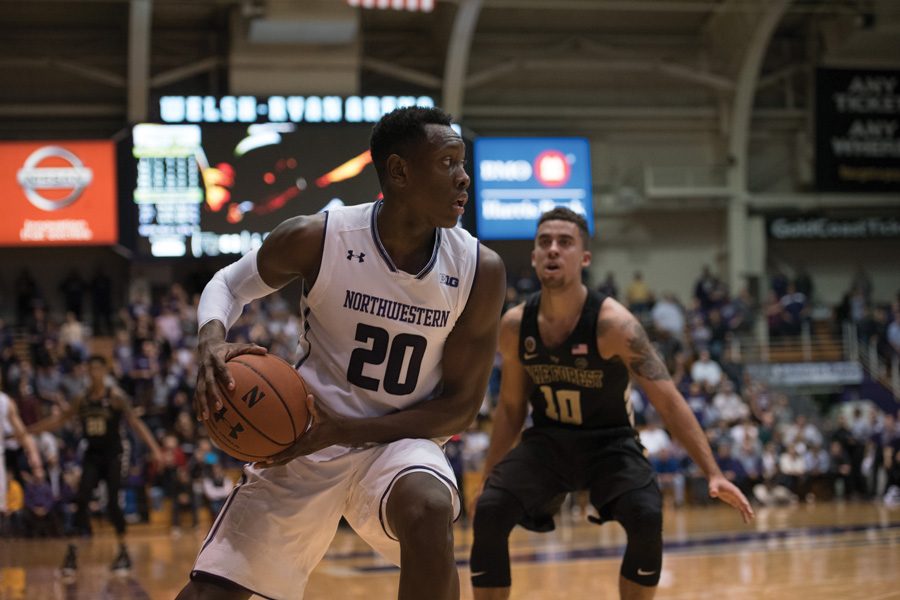 Scottie Lindsey scans the court. The junior guard is the leading scorer for the Wildcats, who are just one game out of first place in the Big Ten standings.

The story is hard to miss. After a checkered century-plus of basketball and several hundred more losses than wins, Northwestern has suddenly vaulted toward the top of the Big Ten.

The Wildcats (16-4, 5-2 Big Ten) are currently projected to make the NCAA Tournament, which they have never reached, and are riding a four-game winning streak into their Thursday night matchup with Nebraska (9-10, 3-4).

Amid it all, coach Chris Collins tries to remind his team of one thing.

“Coach Collins lets us know every day that we haven’t done anything,” junior guard Scottie Lindsey said Friday, two days before NU visited Ohio State and beat the Buckeyes in Columbus for the first time in 40 years.

The win gave the Cats their best 20-game start in program history. Even after that victory, Collins’ message hasn’t changed.

“I’m the scrooge all the time,” Collins said Wednesday. “I’m the one every day telling them they haven’t done anything … I love the fact that our program is starting to get recognized, that there’s an excitement, there’s an expectation level, people are taking notice of what we’re doing. But I have also been around long enough to know about how quickly that can change.”

In fact, the Cats stood at 15-5 through 20 games just last season before losing seven of their final 12 games.

But there are clear differences between that squad and this year’s. These Cats have braved a much more challenging non-conference schedule, and they have already won four road conference games after winning just three on the road in the Big Ten last winter.

And this team boasts more firepower, from the high-scoring Lindsey to seasoned junior point guard Bryant McIntosh to sophomore forward Vic Law, who has emerged as one of the conference’s best two-way players.

Still, given the Cats’ five-game January losing streak last year, it’s easy to see why Collins reminds his team not to get caught up in their early success. Collins said he knows how quickly the season could shift “if you lose sight of why you’ve gotten there.”

Eleven regular season games and a conference tournament — an “eternity” in Collins’ words — still stand in the way of the Cats’ ultimate goal of making their visit to the Dance.

The next two games could be critical in that quest.

The Cats started their current winning streak with a come-from-behind win at Nebraska on Jan. 8 that shifted momentum after a pair of tough road losses. With Nebraska coming out to Evanston, Law said it is crucial to focus on each individual game.

“If we look at tomorrow — as in Nebraska — instead of tomorrow being the Tournament, I think we should be fine,” Law said.

Fresh off a pair of 1-point losses, the Cornhuskers are likely hungry for a win coming into Welsh-Ryan, although they will be without leading rebounder Ed Morrow. Due to a foot injury, the forward hasn’t played since the two teams last met.

NU will also need to avoid looking ahead to its Sunday matchup with Indiana, one of the league’s flagship basketball programs.

The visit from the Hoosiers (14-6, 4-3), who won 89-57 when the two teams met last season, will present a chance for a marquee win and likely bring an energetic crowd to Welsh-Ryan. Tickets for the game on StubHub started at $69.00 as of Wednesday night.

But a successful week for the Cats would have to start with a victory against Nebraska. McIntosh said it’s fun to see Welsh-Ryan “rocking,” but he also said the team knows there is work to be done.

“There’s two stories that can be written about us this year,” McIntosh said. “It’s either us falling apart or us coming together and doing something special.”