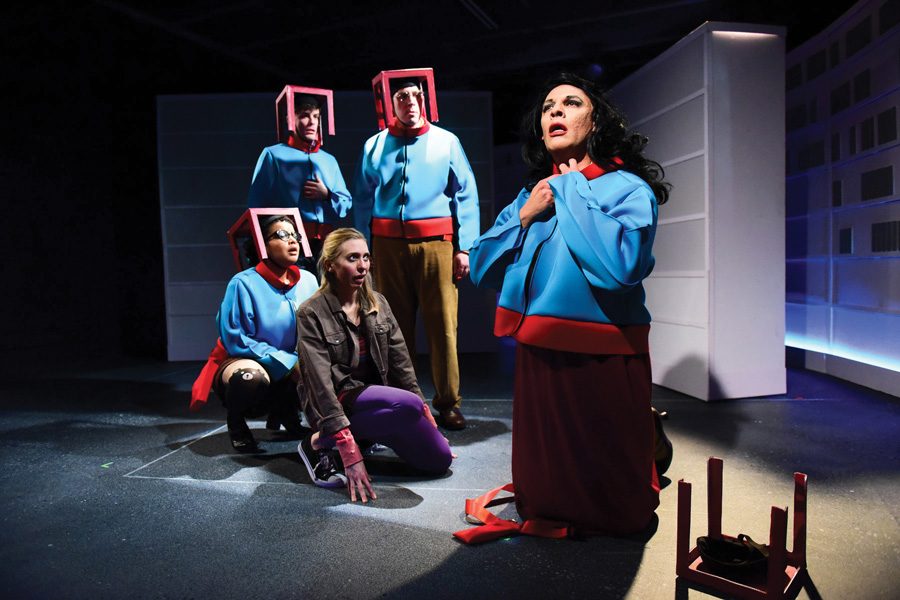 Characters in "Psychonaut Librarians" wear time-travel gear to enter into an alternate universe. The production will run through Feb. 12 at The Den Theatre in Chicago.

Krissy Vanderwarker (Weinberg ’01) has created an alternate reality. There are puppets and battle scenes and time travel helmets, and love conquers hate — an important message for our current world, Vanderwarker said.

Vanderwarker brings this reality to life in “Psychonaut Librarians,” Chicago-based theater company The New Colony’s latest mainstage production, which she is directing. She started working with the theater company on the play last June, she said.

The play begins as the protagonist, a young girl named Jane, falls asleep in a cozy library chair and travels to an alternate universe. She later meets strange creatures, falls in love with one of them and ultimately learns to accept those who are different from her.

“The play is positing that we can’t divide the world into things we like and don’t like,” Vanderwarker said. “So the idea (is) that we actually have to love all sides of debates and people and political spectrums because it is part of a larger universe that doesn’t allow us to have one thing without the other.”

Vanderwarker said the play is a “fascinating” and fun way to arrive at a much more serious message about being open-minded and accepting of everyone.

“I hope (the play) encourages people to be open to different perspectives,” she said, “but I also really hope people pick up on the message of love and … the rejection of fear.”

Christine Mayland Perkins (Bienen ’11) plays the role of Jane. After the child protagonist first travels to the alternate universe, the play cuts forward to Jane as a young woman who persists in preventing fear from dictating her choices — another main theme of the play, she said.

“I get to use a much greater range of emotions and (my character) is much more fleshed out than what is typical,” she said. “I get to be a definitive leader in a way that I think is pretty unusual.”

Neither Perkins nor Vanderwarker majored in theater at Northwestern. However, when Vanderwarker was a senior majoring in history and religion 17 years ago, she impulsively founded Sit & Spin Productions, now a prominent student theater board on campus.

“I had a passion for theater but couldn’t major in it because I had … come to that passion and realization too late to get into the track,” she said. “I wanted to direct and couldn’t find a way in via the normal student theater company proposal process, so I decided that there was space for a new theater company.”

Since graduating, Vanderwarker has been involved in the Chicago theater scene. For “Psychonaut Librarians,” she worked closely with its playwright, Sean Kelly, she said. Together, they developed the script, hired the design team and brought the play to life.

Kelly said he has always been fascinated by the mysterious nature of librarians and the concept of an alternative reality. He said this play is “all of my favorite things, wrapped up into one.” Kelly added that the play is a fun way for people to escape from reality for a while, something he said our society desperately seems to need given the current political landscape.

Vanderwarker said though it is a fun, epic play, its important message about embracing love and recognizing differences is particularly relevant in the context of the new president.

“The fun thing about this is that we get to that message through this wild one hour and twenty minutes of comedy and battle sequences and beautiful love story movement sequences … all kinds of stuff,” Vanderwarker said, “and we arrive in this place that’s open-hearted enough to understand and take in that notion.”