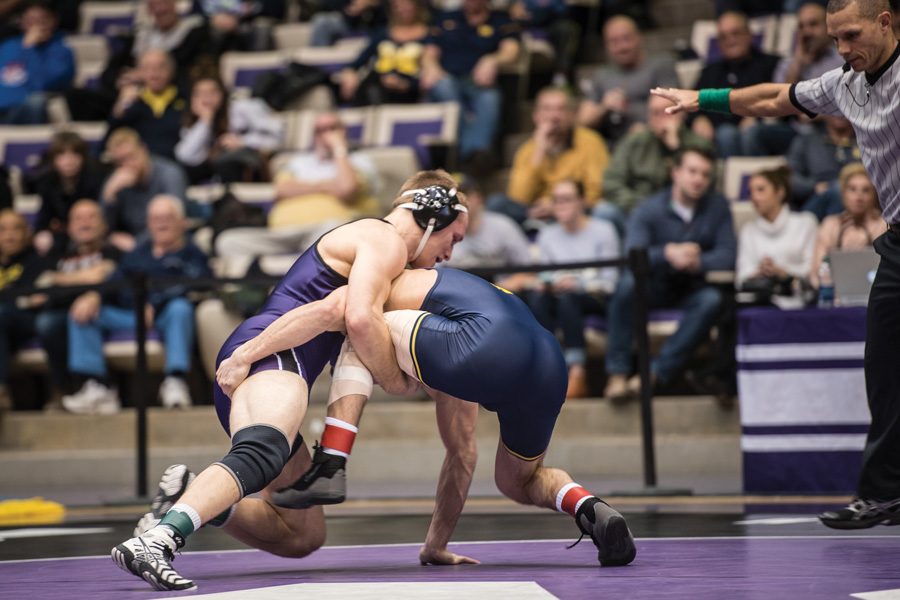 Mitch Sliga grapples with an opponent. The junior will look to avenge an earlier loss this weekend.

Northwestern failed to build on its first conference win in almost two years, losing Sunday against Michigan just one week after collecting the long-awaited victory. But the Wildcats will have a pair of chances to get back into the win column this weekend when the team takes on Indiana and Penn State.

NU (6-4, 1-3 Big Ten) will start its weekend at home Friday with a match against the Hoosiers (7-5, 0-3). The Cats haven’t faced Indiana since 2015, when they rolled past their opponent 37-9. But two of NU’s wrestlers already saw the Hoosiers in the Ken Kraft Midlands back in December.

Junior Mitch Sliga, who is the No. 20 wrestler in the 184-pound weight class, lost his matchup against the Hoosiers’ No. 7 Nate Jackson in a 14-3 major decision at the Midlands. Sliga will get his chance for revenge Friday, and said prior competition has him ready for the challenge.

“Every weekend your opponent is good so it’s really not an adjustment,” Sliga said. “It’s the same mindset as always, just focus on getting better that week and get ready to compete in the weekend.”

The Cats have scored the bulk of their dual points with their upper-weight wrestlers, but may have to find production elsewhere. Jackson will likely prove a tough competitor for one of NU’s most consistent wrestlers.

“Mitch has a little bit more difficult of a matchup this week but we look at that match as a winnable match for us,” coach Matt Storniolo said. “And if something happens in that match that doesn’t go our way, we still have a lot of different paths to victory against Indiana.”

Along with Sliga, 197-pound senior Jacob Berkowitz got a glimpse of Indiana at the Midlands, defeating Jake Masengale in a 12-5 decision.

Berkowitz is in position to rebound from a disappointing defeat last week against Michigan when he lost to unranked Jackson Striggow in a 6-3 decision. Berkowitz said his match Friday will provide an opportunity for redemption.

“They’ve been throwing a couple different guys out there [at 197] every match so I don’t know who they are going to throw out,” Berkowitz said. “I don’t think it changes much. I want to rebound from last week strong.”

Although the Cats see Indiana as a winnable match, they are tasked with a more difficult challenge Sunday when they travel to State College to face No. 2 Penn State (8-0, 4-0 Big Ten). The Nittany Lions held NU to a mere 4 points in their last meeting, winning 46-4.

Penn State’s lineup features eight ranked wrestlers, including six in the top 10 of their respective weight classes. The Nittany Lions are favored in a majority of the matches Sunday, and Storniolo said his team will have to go into the bout with a certain mindset.

“Every week you see highly-ranked opponents get upset,” Storniolo said. “So you’ve got to go in with the mindset that this week I’m going to be one of the guys that knocks off one of these top-ranked guys, and I’m going to help my cause for qualifying for NCAAs.”