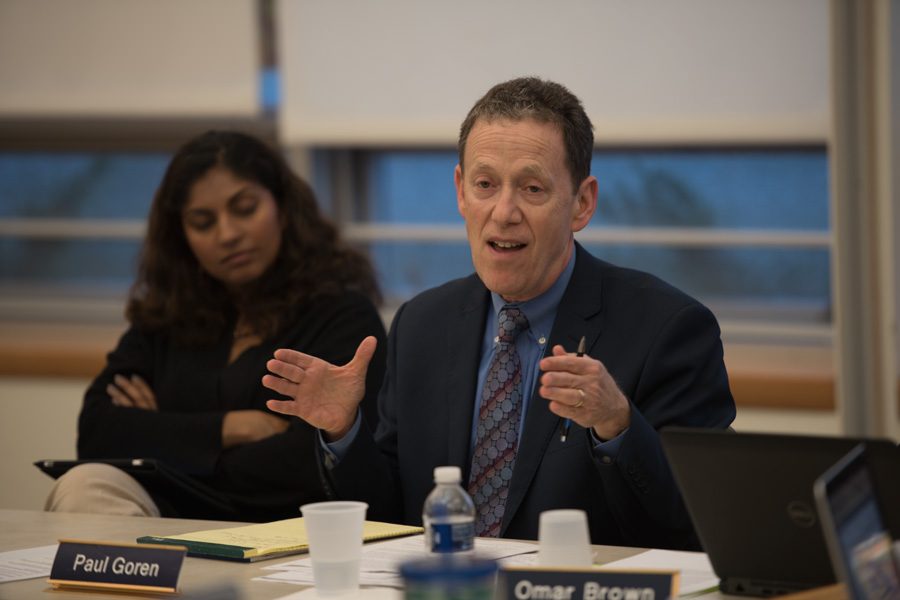 District 65 Superintendent Paul Goren attends a meeting. Goren said Monday it was important to pass a “safe haven” resolution to show immigrant families and students that schools are welcoming places.

The D65 resolution was drafted in conjunction with the ETHS resolution and uses a lot of the same wording, emphasizing a commitment to the inclusion of all students regardless of any potential barriers to educational access, district superintendent Paul Goren said. The resolution prohibits school officials from asking about the immigration status of a student or parent unless required by a court order.

“This resolution really follows the obligation that we have to provide children access to free public education regardless of their immigration status,” Goren said at the meeting. “It ensures that all schools are safe and welcoming.”

Goren told The Daily it was important for District 65 to establish “consistency in the community” after the city passed a “welcoming city” resolution in December and the safe haven resolution passed in District 202 last week. Because a lot of families in the community have children in both districts, it was important to maintain stability, he said.

The resolution comes on the heels of changing national immigration policy following the inauguration of Donald Trump. In a statement posted on the official White House website, President Trump claims to be “dedicated to enforcing our border laws, ending sanctuary cities, and stemming the tide of lawlessness associated with illegal immigration”.

Goren said that he wanted to send a signal to families that regardless of national politics, they could feel safe in the Evanston community. He said it was of the “utmost importance” that the district serves families regardless of immigration status.

Newly-elected board member Sergio Hernandez praised the passing of the resolution, saying he was very proud to hear it as a person who works within the Latino community.

“It’s going to really warm the hearts of a lot of folks who know that there’s a similar safe space in Evanston for our immigrant families,” Hernandez said.

District 65 and District 202 will hold a joint meeting on Feb. 6 and will release a statement about safe haven schools, Goren said at the meeting.

District 65 board president Candance Chow also voted in favor of the resolution. She said she was supportive of the board’s decision.