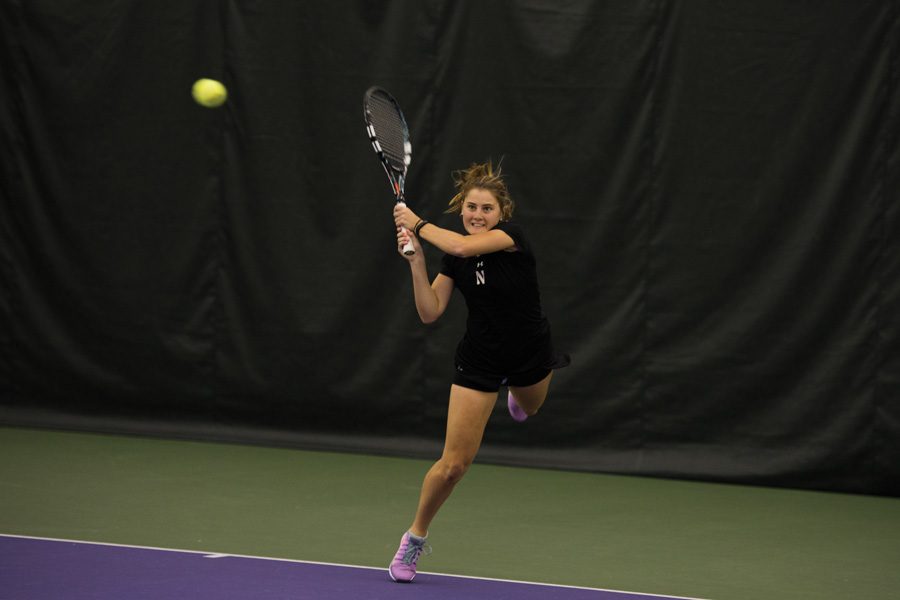 After cruising to two wins a week earlier, the Wildcats returned to play and rolled Harvard on Saturday behind strong performances from the back end of the singles lineup.

Northwestern secured the doubles point quickly before sophomore Lee Or, junior Alex Chatt and senior Brooke Rischbieth picked up the remaining three points at No. 4 through No. 6 singles to ensure the Cats victory.

“I didn’t think we had any holes in our lineup,” coach Claire Pollard said. “That’s probably encouraging and exciting. I thought we were solid everywhere.”

The first singles point came from Or, who raced out to a swift 6-4, 6-1 victory. Or was also part of NU’s strong doubles effort, as she teamed up with junior Erin Larner for a 6-1 victory at No. 2 doubles.

Or used her slice backhand to devastating effect throughout the match and paired it with an impressive first serve. Still, she said she was somewhat disappointed in her performance afterward.

“I was able to find a way to win even though I didn’t play well,” Or said. “If I could, I would’ve hit my forehand way deeper, hit it harder, with a bit more shape. I hit everything pretty short.”

Chatt was the next to get on the scoreboard, powering her way to a 6-2, 6-4 victory. She got off to a rough start, dropping the first two games of the opening set, but then won eight straight games to take control of the match.

Rischbieth secured the victory for NU at No. 6 with a 6-2, 6-4 victory of her own. Her down-the-line backhand went unreturned on match point to clinch the Cats win.

“It’s a great feeling,” Rischbieth said. “It was back-and-forth in the second set, and it was just awesome. The girls were doing a great job on all the courts. I knew if I didn’t get it done someone else would as well, but it’s always great to get that point.”

It wasn’t all smooth sailing for NU, however, as junior Maddie Lipp disappointed at No. 1 singles, losing 6-1, 6-3 and struggling to convert as her forehand slice and backhand deserted her.

The Cats received bad news earlier this week when senior Jillian Rooney broke her wrist and elbow. Rooney was out of the lineup Saturday and is out indefinitely according to Pollard. Rooney represents one half of the No. 23 doubles team in the nation with Doshi and was a fixture in the NU singles lineup last year.

“I don’t really know who’s in and who’s out regularly,” Pollard said. “(Rischbieth’s) been in plenty, so I feel like she’ll be fine. She did a good job today.”

With NU’s No. 1 and No. 2 doubles teams both nationally ranked, Rischbieth’s singles play will be more crucial to the Cats season. She’s off to a good start, with three singles wins already on the year.

“I was really pleased with how well I served,” Rischbieth said. “That’s definitely something I was working on this week, keeping serves out of the net and high first serve percentage. I was able to get some good pop on the first serve and get some free points.”