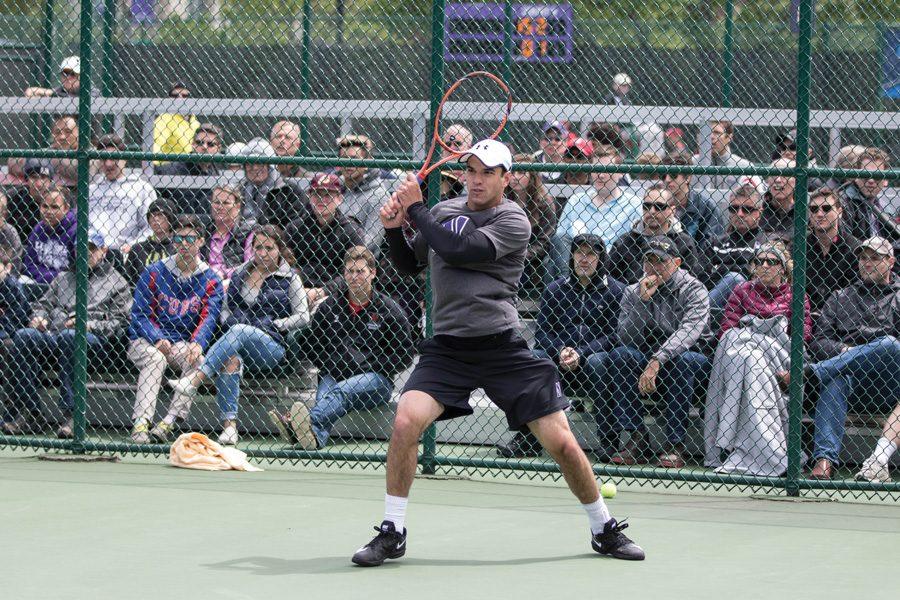 (Daily file photo by Keshia Johnson) Konrad Zieba follows through a backhand. The senior delivered the deciding point in Northwestern’s win over TCU.

Last season, Northwestern fell to TCU in a fiercely competitive match. This year, the Wildcats made sure that would not happen again.

No. 13 NU (4-0) defeated the No. 7 Horned Frogs (1-1) in Evanston on Friday 4-2 thanks to early doubles success and clutch performances in singles play.

“Rankings and stuff aside, being able to beat a good team like this helps the confidence and helps us down the line,” Shropshire said. “When we play other top 10 teams, they’ll know that we can take them out.”

In doubles, Shropshire and his partner, senior Konrad Zieba, defeated the Horned Frogs 7-5 at the No. 1 position. The duo of senior Strong Kirchheimer and freshman Dominik Stary earned a 6-4 victory at the No. 2 slot securing the doubles point for the Cats.

To start singles competition, sophomore Jason Seidman won his matchup with TCU’s Gianni Mancini at No. 6. After an NU loss at No. 5 singles, Shropshire’s 6-2, 6-3 win at No. 3 pushed the Cats’ lead to 3-1. The Horned Frogs would next grab a victory at the No. 1 slot, and the pressure to produce then fell on Zieba and Stary.

With Stary heading into a third set of his battle at No. 4, Zieba looked to close out a back-and-forth contest at No. 2.

Zieba said the doubles point was a critical factor in setting up the victory.

That momentum led to NU’s first win over a top 10 team since March 3 of last year, when it defeated No. 8 Illinois 4-3.

Coach Arvid Swan said he was excited to see the team perform so well this early in the season.

“For us, it was a great test,” Swan said. “I’m so pleased to see our guys raise their level and play at a really high level throughout the match.”

Following Friday’s win, the Cats had a quick turnaround, facing off against Louisville and IUPUI in a doubleheader Sunday.

NU took on the Cardinals (2-1) to begin the day, taking the doubles point to start and receiving singles wins from Stary, Zieba and Seidman en route to a 4-2 win.

Just hours after the conclusion of the match with Louisville, the Cats squared off with the Jaguars (0-1) in their second match of the day.

To begin the matchup, NU took the doubles point in dominating fashion with 6-1 victories from the pairs of Kirchheimer and Stary and sophomore Michael Lorenzini and freshman Chris Ephron.

The Cats’ stellar play continued into the singles portion of the match. Sweeping wins from Zieba, Vandixhorn, Seidman, Stary, Kirchheimer and freshman Brenden Volk allowed NU to prevail 7-0, keeping the team undefeated on the season.

Swan said the exceptional weekend should help propel the Cats into the rest of their 2017 campaign.

“We need to use this, and we have to continue to put up results,” Swan said. “It’s a very long season, and we’re early in the year.”

A previous version of this article misidentified the player in the photo. It is Konrad Zieba. The Daily regrets the error.