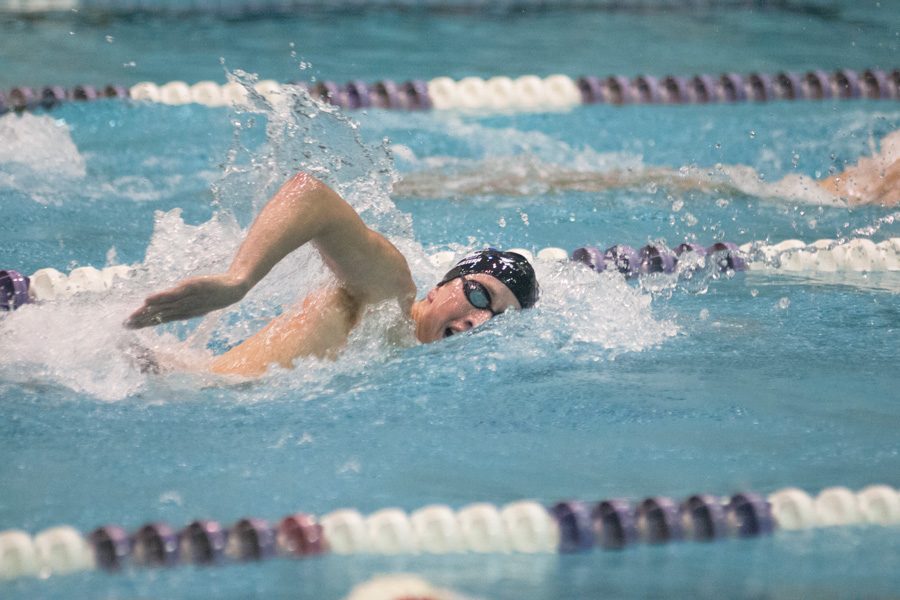 Jordan Wilimovsky breathes between strokes. The senior looks to lead the team as it faces Iowa this weekend.

Jordan Wilimovsky might be a world champion who swam two events at the Rio Olympics, but that doesn’t mean the senior’s final meet in Evanston wasn’t meaningful for him.

Following a nearly two-month break since their last meet, Wilimovsky and Northwestern put up a valiant effort against No. 22 Notre Dame on Senior Day, but fell 196-104.

“It was fun to end on kind of a high note,” said Wilimovsky, who broke the pool record in the 500 yard freestyle in 4:18.99 and also won the 1650 free. “I was just talking to some of the seniors before the meet and it was kind of weird being done.”

His performances qualified him for the NCAA Championships in both events.

Wilimovsky, who took last season off to train for the Olympics, said returning to NU was special for him. He said he missed the team dynamic and atmosphere while training at home for the Olympics.

Though Wilimovsky led the seniors, several underclassmen also put up strong performances. Sophomore Will Hofstadter finished second in both the 100 and 200 yard breaststrokes. Junior Almog Olshtein medaled in both the 50 and 100 yard frees, coming in first and third, respectively.

Olshtein said it was bittersweet seeing the seniors finish their last meet, especially since he has been swimming with them since he came to Evanston as a freshman.

“When a senior graduates, you kind of lose a part of your family,” Olshtein said. “They’re not going to be there with you in practices, but you still have that friend.”

Both Hofstadter’s and Olshtein’s performances bode well for the future of the team after the current seniors graduate.

Though Senior Day brought strong emotions, it is not the end of the season for NU, which will hit the road this weekend to take on Iowa. Olshtein said he feels good going into the second meet of the winter and that the team has a good shot against Iowa after a strong performance against the Fighting Irish last weekend.

Unlike Olshtein, who still has another year swimming with the Cats, Wilimovsky said he’s not thinking about the future too much. After a satisfying final homestand, he is looking forward to swimming with his team for the last few months of his career.

“It’s very unique to be on a swim team at Northwestern, having 25 guys coming together every day,” he said. “We’ve still got a couple dual meets left, but it was cool to end it with the group we had.”