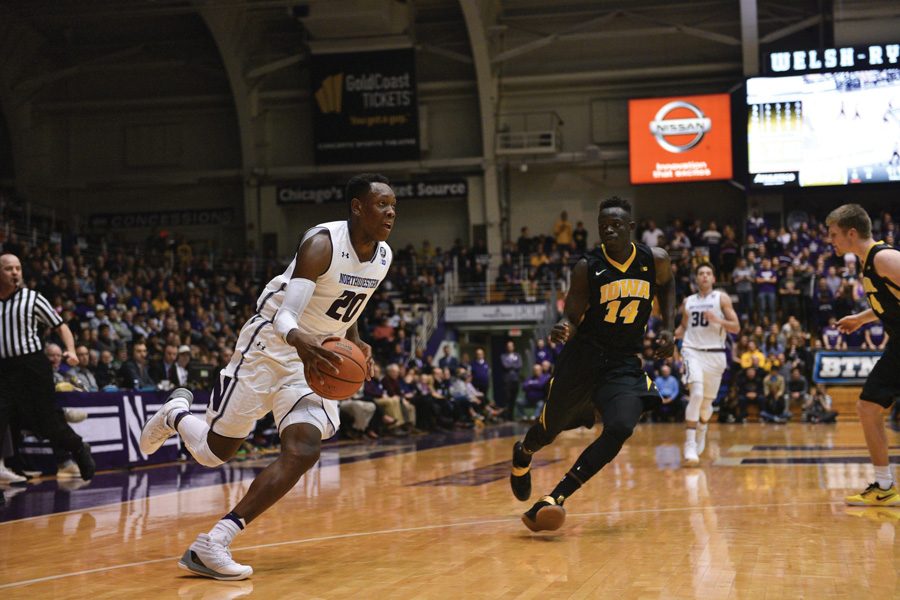 Scottie Lindsey drives to the basket. The junior guard and the Wildcats look to continue to have fun Sunday at Ohio State.

The quest to end a 112-year streak of failing to qualify for the NCAA tournament hasn’t given Northwestern much room for error this season.

In last Sunday’s 89-54 rout of Iowa, however, the Wildcats (15-4, 4-2) were finally afforded some time to enjoy the talent they’ve assembled and success they’ve experienced thus far this season.

A week later, it will be back to business as usual for NU as it travels Sunday to face Ohio State (12-7, 2-4), which has recovered from a dreadful 0-4 start to conference play with trend-shifting wins over Michigan State and Nebraska.

But the Cats will hope to keep at least one lesson in mind in Columbus — how to have a good time under the weight of a century-long drought.

“All our guys really want to do well, and you have a tendency at times to put a lot of pressure on yourself, because you want to do it,” coach Chris Collins said. “Sometimes what gets lost in this is (when) we’re out there playing ball, we should be having fun doing it.”

Sophomore center Dererk Pardon’s strong comeback after missing all of December has added an inside dimension to NU’s offense, but the focal point remains the backcourt.

If junior guard Bryant McIntosh’s performance against Iowa — 9-of-11 from the field — indicates a coming reversal from his efficiency woes of the season’s first half, the duo of McIntosh and junior guard Scottie Lindsey could become a major matchup issue for the rest of the Big Ten. Lindsey leads the Cats with 15.8 points per game.

McIntosh agreed and not particularly quietly.

“The backcourt with me, Vic (Law) and Scott is tremendous,” McIntosh said. “That really puts a lot of pressure on other teams to figure out how to guard all three of us. I think we’re all versatile weapons … we are a pretty elite backcourt.”

That pressure will certainly be felt by the Buckeyes, who allowed an opponent guard to go off against them in three of their four conference losses to date — Illinois’ Malcolm Hill scored 20 points against Ohio State, Minnesota’s Amir Coffey tallied 19 and Wisconsin’s Bronson Koenig totaled 21.

But after a last-second layup lifted the Buckeyes over Nebraska 67-66 on Wednesday, giving them consecutive wins for the first time since topping Youngstown State and UNC-Asheville before Christmas, the tide might be turning.

That won’t be welcome news for the Cats, who have lost 12 straight games against Ohio State and 19 of 20 since Thad Matta became the Buckeyes’ coach in 2004. In both meetings last year, NU squandered halftime leads to lose 65-56 and 71-63, respectively.

This year, though, the Cats have repeatedly proven to be a more explosive and well-rounded team than before, and Sunday’s matchup arguably presents the best opportunity in years to break the slump against Ohio State.

“People are starting to embrace who my guys are,” Collins said. “They play really hard. Are we going to win every game? No, not in a league like this, but I hope you guys see how hard these guys play each and every night.”