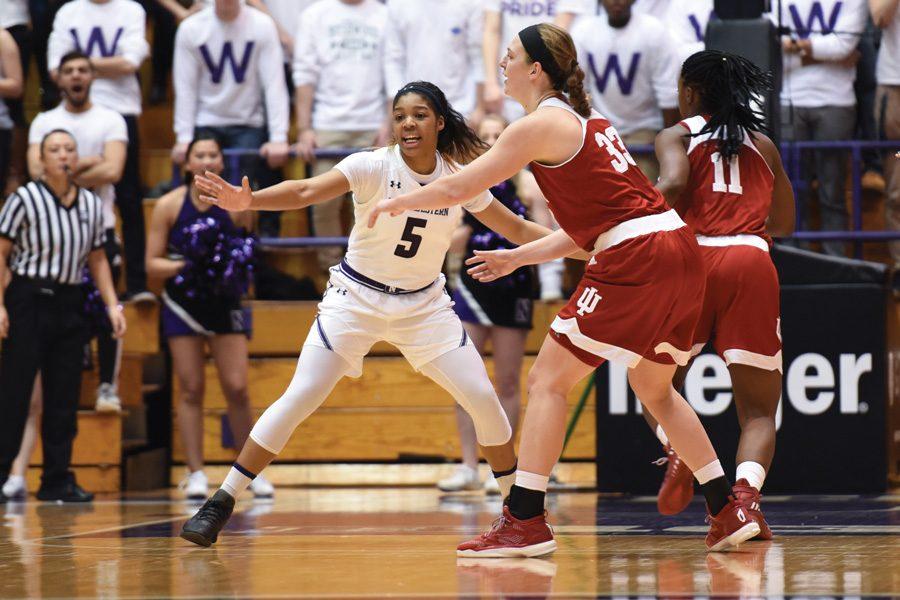 Wearing Jordan Hankins’ No. 5, Amber Jamison plays defense. The sophomore has emerged as a key contributor for Northwestern over the past two games.

For Amber Jamison, Tuesday’s win was more than just a game.

The sophomore guard was a close friend of Jordan Hankins, who died last week. Jamison roomed with Hankins their freshman season and wore Hankins’ No. 5 jersey in Northwestern’s game against Indiana on Saturday, the team’s first game since the death of Hankins.

“I am definitely playing with more energy and more confidence,” Jamison said. “I’m trying to do what I know she would do. Just trying to be like her.”

Jamison has started back-to-back games — the first two starts of her career — since Hankins’ death, scoring a combined 35 points over the Wildcats’ last two wins. Her 22 points, 6 rebounds and 3 assists against the Spartans were all career highs as well.

Coach Joe McKeown did not provide an update on senior guard Christen Inman, who missed Tuesday’s game with an injury, so it remains to be seen how many more starts Jamison will get. But in the two games since Hankins’ death, Jamison and the rest of her team are keeping their teammate in their minds while on the court.

“Just inspirational, the way they’ve responded to the challenges that have been put in front of them,” McKeown said. “Amber did a great job of showing a lot of poise. She played great defense. She played both ends of the floor. Obviously, her numbers are staggering.”

NU as a whole will need Jamison, and other role players, to continue stepping up if Inman misses extended time. However, Tuesday’s win was a good sign that the Cats’ depth may not be a problem in Inman’s absence, especially considering senior forward Nia Coffey’s rare off-night.

McKeown said having a versatile player like Douglas makes life difficult for other teams.

“She’s probably one of the smartest players in the league, just makes great decisions,” McKeown said of Douglas. “When she can step out she gives you the ability to play inside out, which is really hard to guard, and that’s where she’s just a tough matchup.”

But it appears that Jamison will be tasked as the primary backup to Inman for the time being. Despite her improved stats, McKeown said he hasn’t seen anything different of Jamison in practice.

“She’s just seizing the moment and the opportunity. She’s taking advantage of it,” McKeown said. “She’s just always hard working, brings this great attitude every day. … We’re asking a lot from her.”