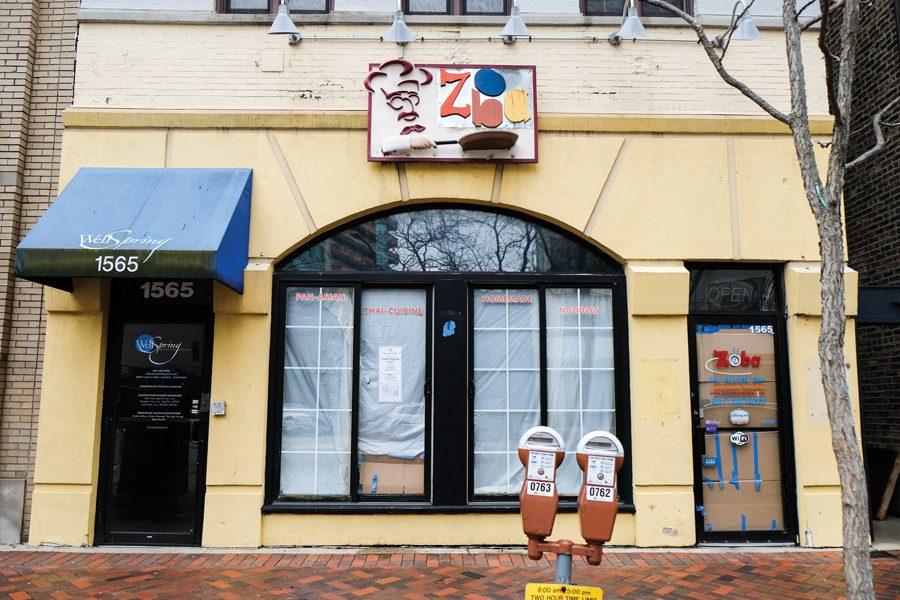 (Jeremy Yu/The Daily Northwestern) Sushi Burrito is hoping to move into 1565 Sherman Ave. in the coming months. The restaurant Zoba Noodle Bar was previously located in the spot.

A Chicago-based restaurant chain may move into a vacant downtown storefront, potentially bringing a new food trend to Evanston.

Sushi Burrito is planning to open its fourth Chicago-area location at 1565 Sherman Ave., replacing Zoba Noodle Bar, which closed at the end of October. The fast-casual restaurant is known for its sushi burritos, enlarged sushi rolls wrapped in seaweed and rice paper, but it also serves regular sushi rolls and sushi bowls.

The restaurant currently has locations in Lakeview, Lincoln Park and Wicker Park. A special use permit for Sushi Burrito was approved by aldermen on Jan. 9, and they will take a final vote on whether the restaurant will occupy the space at the City Council meeting on Jan. 23. Sushi Burrito owner Ganzorig Amgalanbaatar said there was not yet a timeline for the opening of the Evanston location.

Amgalanbaatar said he was excited about the opening in Evanston because many of his customers are from Chicago’s northern suburbs, such as Wilmette and Skokie, and have expressed hopes for a store closer to them. Additionally, Amgalanbaatar said a location on a busy thoroughfare such as Sherman Avenue was ideal.

“This location is very (accessible) for customers living on the North Side,” Amgalanbaatar said. “Evanston is a big city so hopefully it generates much better than the others.”

Minimal changes will be made to the interior of the space, and no exterior changes are proposed other than signage, according to council documents.

Annie Coakley, executive director of Downtown Evanston, said Sushi Burrito will be a unique addition to Evanston’s dining scene, but also pointed out its similarities with the new Aloha Poke moving in down the block at 630 Davis St.

“The poke concept will be right around the corner from the sushi burrito concept so there might be some overlap with the theme,” Coakley said. “But hopefully they’ll complement one another.”