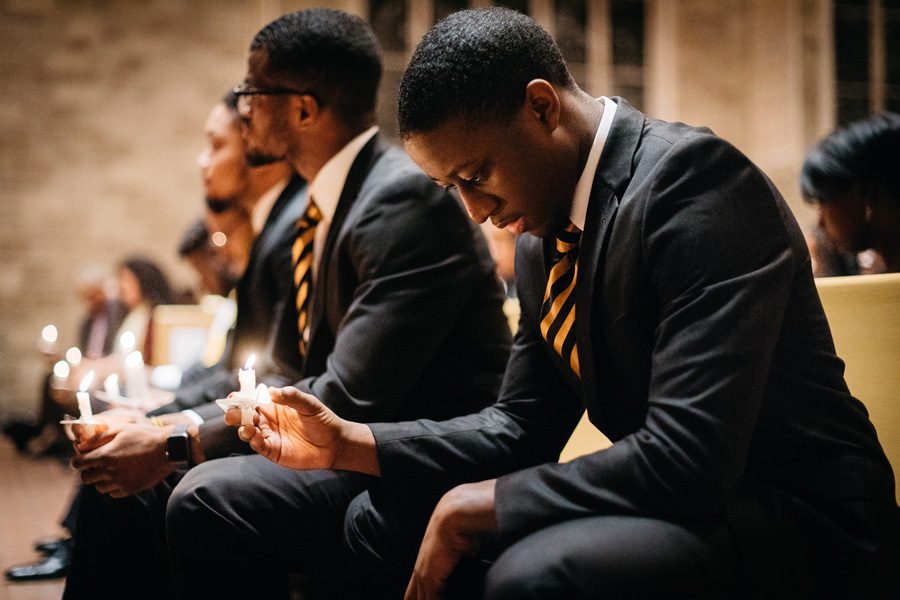 Brothers of Alpha Phi Alpha sit in silence as they hold their candles to honor the legacy of Martin Luther King, Jr. The event was held as part of a two-week long series to reflect on King’s lessons as a community.

To celebrate King’s legacy, the Alpha Mu Chapter of Alpha Phi Alpha Fraternity, Inc. held the annual vigil, inviting Clint Smith, a teacher and poet, as the keynote speaker. The vigil is part of a two-week long series of programming commemorating King and his legacy. Rather than organizing a program of traditional speeches, Smith used spoken word to convey his message to the crowd, encouraging the audience to participate by snapping and making noises of approval.

Timothy Mays, another teacher and poet, also spoke, reciting his poem “Finally,” which is inspired by King’s “I Have a Dream” speech, to celebrate his contributions to the black community as a pioneer of civil rights.

With regard to King’s legacy, Smith talked about the need to speak up for one’s beliefs. In his poem “The Danger of Silence,” he said silence is a “residue of fear” and a reflection of one’s reflex to retreat to safety.

“I will live everyday as if there were a microphone tucked under my tongue, a stage on the underside of my inhibition,” he said. “Because who has to have a soapbox when all you’ve ever needed is your voice?”

He also explained how prejudice fosters a unique childhood for black youth. In his poem “How to Raise a Black Son in America,” he recalled a time he was dragged away by his father while he played with water guns at age 12. He said he now realizes the fear his father must have felt as he pretended to shoot guns.

Weinberg senior Dante Robinson, president of APA at Northwestern, said he closely relates to this story because he too went through a similar experience playing with a water gun as a child.

“It’s important for other people in the community to be aware of the issue and at least get a little bit of perspective,” he told The Daily.

London Edwards-Johnson said the vigil was a good opportunity for the community to come together and think about King’s message and what he fought for.

The SESP junior added that it was a time for her to evaluate whether society has reached King’s goal of unity and equality, and what can be done to further continue his legacy.

“A lot of his message is about us being together and raising above all these differences that we face, and I think that just acknowledging that is super important,” Edwards-Johnson told The Daily.