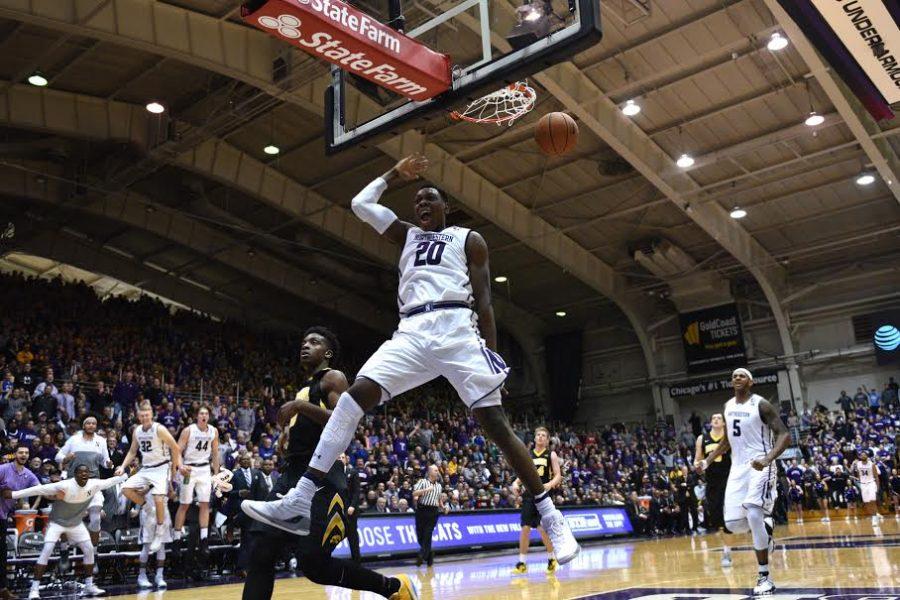 When Northwestern took the court Sunday night, it knew that it had to stop one player in particular.

Iowa guard Peter Jok, the Big Ten’s leading scorer, came into the contest fresh off a 29-point performance in the Hawkeyes’ upset of No. 17 Purdue. As Iowa surged in its last few games, Jok had been a one-man wrecking crew.

“He scares you,” coach Chris Collins said of Jok. “You’re not going to stop those guys. … We just didn’t want him to get easy baskets. And we really wanted to eliminate his 3s and his free throws.”

But with sophomore forward Vic Law taking the lead guarding the Hawkeyes’ go-to scorer, NU held Jok to 4 points and Iowa (11-8, 3-3 Big Ten) to its lowest scoring output since November. Jok did not make a single free throw or 3.

Meanwhile, the Cats (15-4, 4-2) exploded offensively, shooting 60 percent from the field and consistently electrifying a Welsh-Ryan Arena crowd of 7,732 en route to an easy 89-54 victory.

Bryant McIntosh turned in his finest performance of the season, posting 20 points on 9-for-11 shooting and dishing out 10 assists. The junior guard had made just 5-of-20 attempts in his previous two games and hadn’t connected on more than half his shots in a game since a late November victory over Wake Forest.

Junior guard Scottie Lindsey was at his best as well, blazing his way to 22 points and adding eight rebounds and five assists.

The Cats pushed the pace in the first half, using aggressive defense and sharp transition offense to build a 39-23 lead 16 minutes into the contest. A transition dunk by junior forward Gavin Skelly off a McIntosh pass gave the contest that 16-point margin and brought the crowd to its feet as Iowa coach Fran McCaffery called a timeout.

“Our atmosphere tonight … was tremendous,” McIntosh said. “I got the outlet and was pushing up the floor, and I saw Gavin trailing at half court, and I kind of knew I was going to throw it then as long as he ran hard … he made eye contact with me and he knew.”

NU and Iowa played back-and-forth ball for the frame’s final minutes, and the Cats took a 12-point lead into the break. NU would continue to grow its advantage early in the second half, taking a 54-36 lead on a Lindsey jumper with 16:05 to go.

When Iowa made its push in the second half, cutting NU’s lead to single digits with 13:09 remaining, the Cats responded. McIntosh hit center Dererk Pardon with a laser pass, which the sophomore flushed, and a couple of possessions later, senior forward Sanjay Lumpkin connected from deep off another McIntosh assist. All of a sudden, the lead had crept back to 14 by the second half’s under-12 timeout. Iowa never threatened again.

The Cats used an 18-0 run, capped by a Pardon dunk, to build a 32-point cushion with 4:48 to go. Pardon finished the night with 14 points and nine rebounds. The icing on the cake for NU would turn out to be an alley-oop from McIntosh to Pardon just a few moments later.

Meanwhile, Jok sat on the bench for the game’s final eight minutes. McCaffery said that the guard’s back was bothering him in the second half, but credited the Cats’ defense for taking him out of the game, noting that “they were up close — tight on him, they were really paying attention to him.”

With the deficit insurmountable, McCaffery left Jok on the bench in the closing minutes.

NU never trailed in the victory, and the 35-point final margin was the Cats’ largest ever in a game against Iowa.

“It was our best 40-minute performance of the year,” Collins said. “When I took this thing over four years ago, and you walk in Welsh-Ryan and it’s dark — all of us are kind of dreamers at heart — you close your eyes and you envision a night like tonight.”