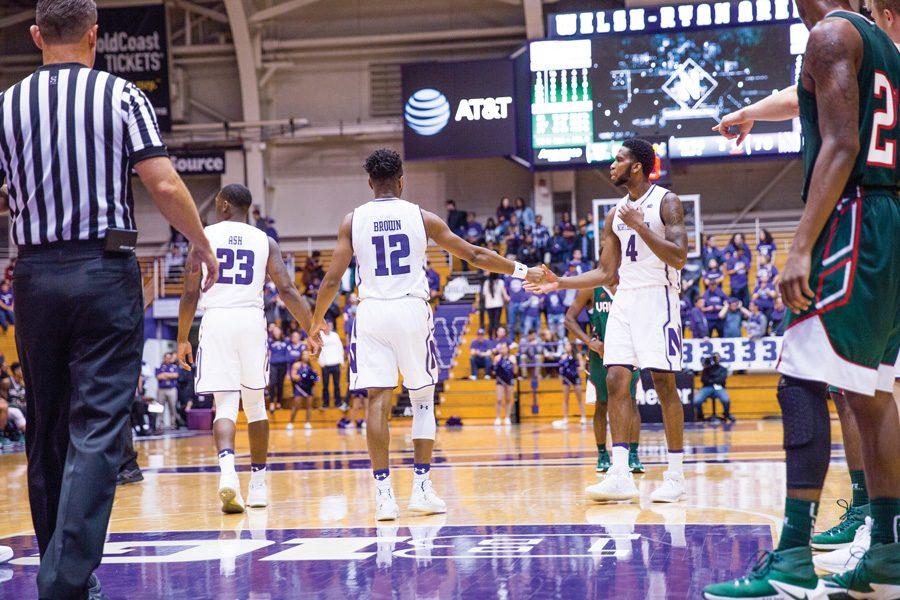 Isiah Brown and Vic Law celebrate. The duo combined for 34 points in Northwestern's win over Rutgers.

Rutgers entered Thursday’s contest against Northwestern with just three conference wins since joining the Big Ten in 2014. And for much of the first half, it seemed as though the Wildcats would be their fourth victim.

But freshman guard Isiah Brown kept the Cats alive during a rough start, and junior forward Vic Law paced the team through the close, as NU (14-4, 3-2 Big Ten) emerged with a 69-60 win.

“This was a really good win for us, we had to earn it,” coach Chris Collins said. “They did a great job of taking us out of almost everything we wanted to do with their defense, with their athleticism and physicality, and we just had to keep playing.”

It took nearly four minutes for the Cats to score, with an elbow jumper from Vic Law snapping a 7-0 run from the Scarlet Knights to open the game. But Law’s score did little to jump start a disjointed NU offense.

A 9-for-34 first-half shooting effort kept the Cats on Rutgers’ heels, though a strong early showing from Brown and an unimpressive shooting output from the Scarlet Knights (29 percent) kept NU within striking distance.

Brown’s 11 points in the opening period nearly compensated for the struggles of the Cats’ starters, who managed just 7 before the break. His most important bucket came with under a minute remaining in the first half, when NU pushed back after Rutgers opened its lead to 9. But the hosts missed their final six shots, and a pair of free throws from senior forward Nathan Taphorn brought the Cats within 3 at the intermission.

NU’s push continued into the second half.

A balanced scoring effort in the first four minutes, capped by junior guard Bryant McIntosh’s first points of the game, pushed the Cats in front for the first time with 17:19 remaining in the contest.

Sophomore center Dererk Pardon anchored the defense with eight of the team’s 15 blocks, a program record. His 11 rebounds, including eight on the offensive end, helped NU thrive in the second half’s crucial minutes.

Law awoke from a slumber to notch 19 of his 23 points in the second period, including 5 straight for the Cats to snap a scoring drought.

“Law was tremendous,” Collins said. “Every time we needed a play, I thought Vic was the one who stepped up and made it.”

And when junior guard Scottie Lindsey, who finished with 14 points, connected on a layup to lift NU’s lead to double digits, Rutgers was effectively finished.

Despite an uninspired start for the Cats, the hosts proved as bad as advertised down the stretch. When it counted, momentum tipped in the visitors’ favor, and NU escaped with the 9-point win.

“For us to have that in our DNA, that we can win a game like that shows a lot about our group,” Collins said. “Really proud of the guys.”