Fencing: Northwestern looks to prove itself at Western Duals 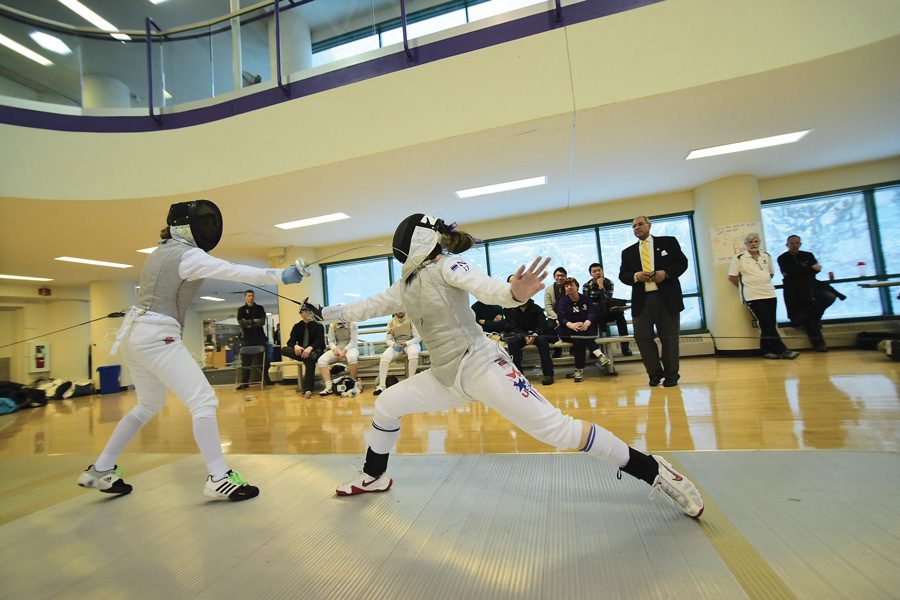 (Daily file photo by Sean Su) Sarit Kapon lunges at an opponent. The senior was crucial in the Wildcats’ most recent team match.

Northwestern finished the 2015-16 campaign ranked No. 7 in the country, but the Wildcats entered this year facing considerable obstacles. Longtime coach Laurie Schiller retired after last year’s conclusion, and in its first invitational, NU faced a gauntlet of three top-10 team opponents from a year ago — No. 3 Princeton, No. 6 Ohio State, No. 2 Columbia — in addition to Yale and Johns Hopkins.

The Cats lost four of the five matches and began the year 1-4.

However, NU (9-4) rebounded at the Vassar Invitational, winning eight straight including a victory over Cornell, last year’s No. 10 team. After a long break where the only competition was the individual USA Fencing North American Cup, the Cats will compete as a team for the first time in over two months Sunday in Pasadena, Calif.

Coach Zach Moss said he’s excited to see how his team fares after the layoff.

“That’s gonna be a real test, to reflect on all the work that we put in in the fall and where we are as a group, and we’ll continue to grow through that process,” he said.

At the Vassar Invitational, NU swept away the field, winning by a collective score of 172-44. In her collegiate debut, freshman Abby Tartell went a perfect 12-0. Senior Cindy Oh also went 12-0 while senior Sarit Kapon went 11-1.

The Cats will compete in matches for the next five weekends. Moss said they’ll fence over 30 different schools in that time. This weekend, he said they’ll compete against seven different opponents, including Brandeis, Air Force, Incarnate Word, Caltech, UC San Diego and Stanford.

The Cardinal is the marquee opponent of the invitational. Though rankings only recognize 10 teams, Stanford received enough votes to be the No. 12 school in the country.

“They’re a really strong team, and so that’ll probably be our biggest challenge of the weekend,” Moss said.

A strong showing at the Western Duals would further serve to legitimize NU in the post-Schiller era.

Moss knows there’s pressure to live up to the expectations that come with a top-10 ranking and to uphold the standards the former coach instilled in the program.

“This program is transitioning effectively from the only head coach it’s really ever known for 38 years, so everything’s a little bit different, and there are always growing pains that come with change,” he said. “Overall, the team is performing well. We’re excited about the training level and where we’re at as a group.”

Freshman Amy Jia never fenced under Schiller, but she said Moss has been “wonderful” and is universally liked.

Jia was among a number of underclassmen who performed admirably in last weekend’s NAC, offering a glimpse into the Cats’ future.

“The program is changing for the better,” she said. “Everyone is very confident in Zach’s ability to make the program even better than it was.”

With five duals in the upcoming five weekends, NU will have the chance to prove the program is still deserving of its prestige. On Sunday, the Cats will look to begin that stretch with a big win in Pasadena.

“We’re feeling really good about where the team is right now and the direction we’re heading,” Moss said. “We’ll see how that translates into our results moving forward.”