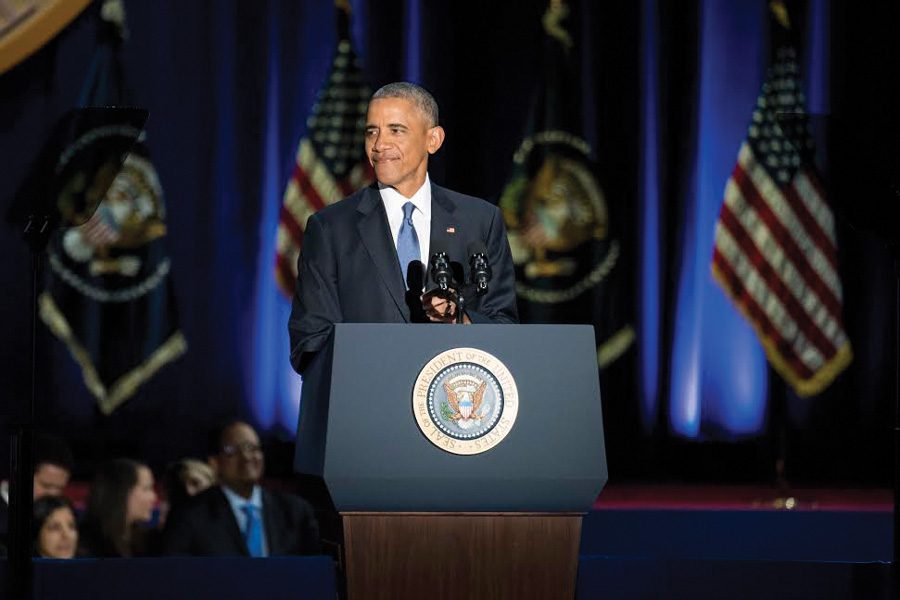 President Barack Obama delivers his Farewell Address at Chicago's McCormick Place on Tuesday evening. In his nearly hourlong speech, Obama implored young people to get involved in the political process. "It has been the honor of my life to serve you. I won't stop," the president said.

CHICAGO — President Barack Obama encouraged young Americans to “hitch their wagon to something bigger than themselves” during a highly-anticipated homecoming Farewell Address at the McCormick Place convention center on Tuesday night.

“I’ve seen you in every corner of the country,” he said. “You believe in a fair, just, inclusive America. You know that constant change has been America’s hallmark, something not to fear but to embrace, and you are willing to carry this hard work of democracy forward.”

Obama urged renewed civic engagement and warned against taking democracy for granted in front of a large and enthusiastic crowd. Minutes before Obama took the stage, the crowd began shouting and cheering, sounds reminiscent of a campaign rally.

The president — who will leave office Jan. 20 following the inauguration of President-elect Donald Trump — highlighted the achievements of his administration, including the passage of the Affordable Care Act and killing Osama bin Laden.

Obama said the accomplishments of his presidency were a testament to the power of grassroots organizing and volunteering.

“If I told you eight years ago what we were going to do, you might have said our sights were set a little too high,” he said. “But that’s what we did. That’s what you did. You were the change.”

Obama also attempted to reassure his supporters, many of whom are still grappling with Donald Trump’s inheritance of the Oval Office.

Since Trump’s election in November, Obama has urged those disillusioned with the president-elect to give him a chance to prove himself, emphasizing the importance of the peaceful transition of power. He echoed this sentiment Tuesday night, calling it a “hallmark” of democracy.

American democracy has been threatened in the first years of the 21st century both by external threats and internal disunity, Obama said.

“Democracy does require a basic sense of solidarity — the idea that for all our outward differences, we are all in this together; that we rise or fall as one,” he said.

Obama warned against allowing threats against democracy to fester. One step in this process would be rooting out economic inequality, which Obama called “corrosive to our democratic principles.”

The solution to these problems must come domestically, Obama said, in the creation of a new “social compact” that would pledge to guarantee quality education and union and workers rights, as well as cut down on tax loopholes for the wealthy.

Also important to the longevity of American democracy is a recommitment to establishing racial equality, Obama said.

The ideal of a post-racial society was “not realistic,” Obama said.

“Race remains a potent and often divisive force in our society,” he said. “I’ve lived long enough to know that race relations are better than they were 10, or 20, or 30 years ago — you can see it not just in statistics, but in the attitudes of young Americans across the political spectrum. But we’re not where we need to be.”

Obama also warned against creating a world, from social media to news outlets, without diversity of opinion. Quoting Atticus Finch, the president told the crowd to put themselves in someone else’s shoes, something he acknowledged may be difficult for many.

“It’s become safer to retreat into our own bubbles,” he said. “But without some common baseline of facts; without a willingness to admit new information and concede that your opponent is making a fair point, and that science and reason matter, we’ll keep talking past each other, making common ground and compromise impossible.”

The president urged these common principles in the face of mounting threats, such as foreign extremism or “autocrats” who see democracy itself as a threat. In the fight against terrorism, Obama declared the only way to lose would be to “betray our Constitution and our principles in the fight.”

Rounding out his hourlong speech, the president emphasized that any threats against democracy could be countered by the “most important office” of being a citizen. In encouraging people to engage with the civic process, both in and outside of election season, Obama pledged to do the same.

“It has been the honor of my life to serve you. I won’t stop,” he said. “In fact I will be right there with you as a citizen.”

The president also used his final speech while still in office to thank First Lady Michelle Obama and his daughters Sasha and Malia, as well as Vice President Joe Biden, whom he called his “brother.” The work they, his staff and volunteers had done throughout his political career had “changed the world,” Obama said.

“I leave this stage tonight even more optimistic about this country than I was when we started,” he said. “Because I know our work has not only helped so many Americans; it has inspired so many Americans — especially so many young people out there — to believe you can make a difference.”

Obama left the audience with a request to “hold fast to that faith written into our founding documents” and believe in their ability to change.