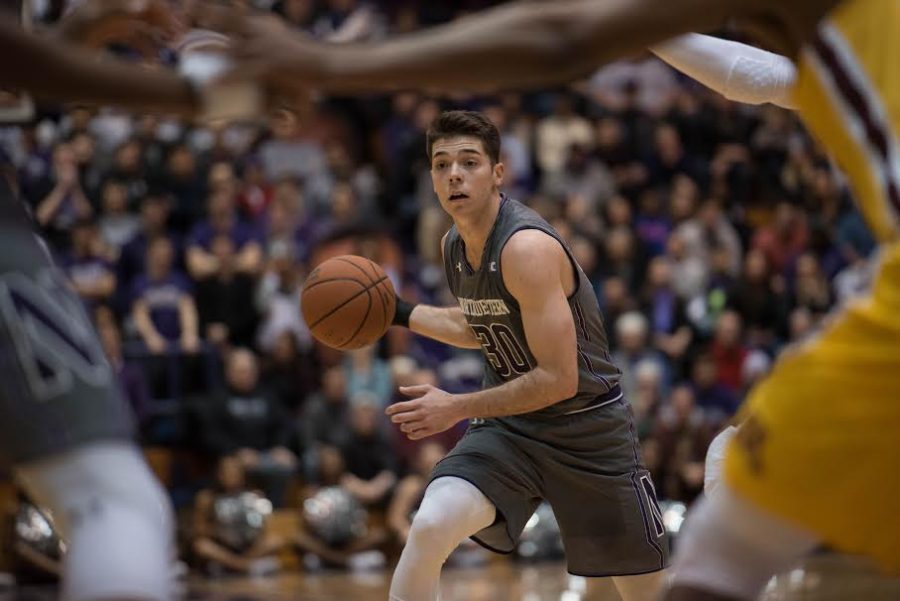 Bryant McIntosh handles the ball. The junior went cold after a hot start against Minnesota on Thursday.

Minnesota and Northwestern battled to the buzzer in the Wildcats’ Big Ten home opener, but a streaky second-half performance from NU doomed it to a 70-66 defeat in its third conference game.

Neither team had trouble putting the ball in the basket to open the game, and the score was knotted at 16 by the under-16 timeout of the first half. The scoring pace dropped as the half progressed, but NU (12-4, 1-2 Big Ten) and Minnesota (14-2, 2-1) both shot over 52 percent and traded the lead seven times in an entertaining first period.

Bryant McIntosh led all scorers with 14 points in the first half, a strong early showing for the junior guard who shot a combined 8-for-27 in NU’s first two conference games. He lofted in a layup at the halftime buzzer to give the home team a 39-35 edge.

But the young, talented Golden Gophers played back-and-forth ball with the Cats all game, as freshman Amir Coffey — brother of NU women’s basketball forward Nia Coffey — scored 17 points to pace Minnesota’s offense. The Golden Gophers used a 14-4 run to take a 54-51 lead into the under-8 timeout in the second half.

The Cats’ offense sputtered down the stretch, and NU was unable to put together the run it needed to edge back in front of Minnesota. The Cats cut the lead to 66-64 with 13 seconds remaining on a McIntosh 3, but got no closer as they slumped to a second-straight defeat in Big Ten play.

NU went into halftime in a offensive rhythm, shooting 52 percent from the field and hitting 5-of-11 attempts from 3. But something changed in the second half, as the Cats had trouble finding the easy shots they had in the first period and shot just 28.9 percent from the field as a result. After slumping in the team’s previous defeat at Michigan State, NU has some work to do to find itself on the offensive end for an entire game.

2. As Bryant McIntosh goes, so do the Wildcats

NU’s usual star has taken a bit of a back seat this year, as junior guard Scottie Lindsey has emerged as a leading scoring option for the Cats. But McIntosh’s first half performance was a reminder of how the team’s offense hits a new gear when he’s both a scoring threat and a facilitator. McIntosh put up just 7 points and was much less involved in the second half as NU sputtered, and if the Cats hope to succeed in their conference schedule, they’ll likely need more from their point guard.

Pardon returned Thursday after missing eight games due to surgery for an injured wrist. Coach Chris Collins said that he didn’t want the sophomore center to try to force anything, and Pardon listened. The big man scored 9 points, with all four field goals coming in the second half. Though he mistimed a few rebounds early on, the 6-foot-8 Pardon still recorded 8 boards. And while Minnesota center Reggie Lynch scored 12 points, the Cats’ starting center looked comfortable as the team’s defensive anchor, committing no fouls in his return.

– Lindsey, NU’s leading scorer, notched 13 points on 5-of-13 shooting on the night.
– Forwards Gavin Skelly and Sanjay Lumpkin combined to shoot 2-of-12 from the field.
– The Cats shot 1-for-15 from 3 in the second half.