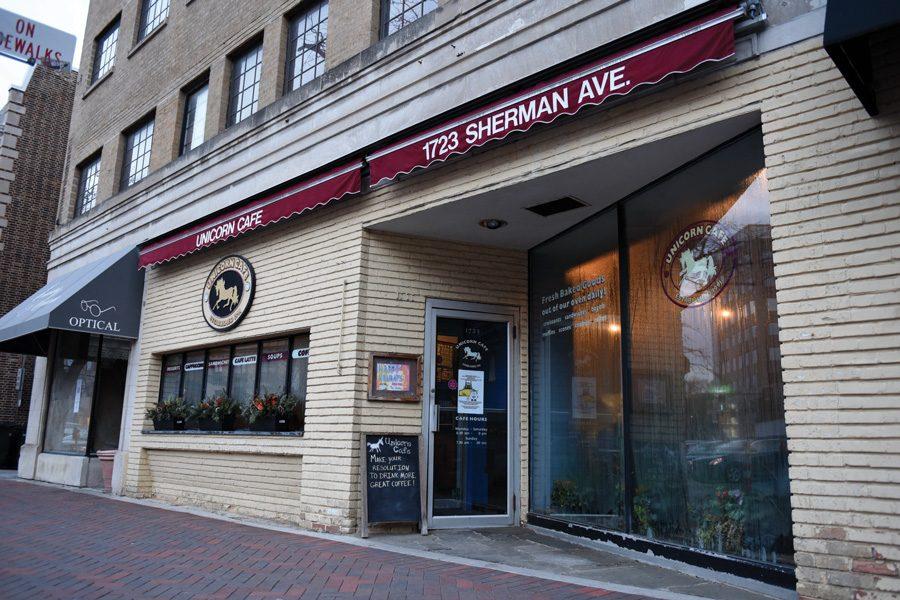 Unicorn Cafe, 1723 Sherman Ave., may soon be neighbors to an Insomnia Cookies store. The chain is looking to move into the former eyewear store at 1725 Sherman Ave, and their proposal will appear before the Zoning Board of Appeals next week.

The answer to your late-night sweet tooth may soon be imminent.

Insomnia Cookies, a 13-year-old bakery and delivery service, is looking to open in downtown Evanston. If approved by the city, it will occupy the former space of an eyewear store at 1725 Sherman Ave. and will become one of the city’s latest open establishments.

Insomnia Cookies, founded by an economics major at the University of Pennsylvania in 2003, has grown ubiquitous among college students. And for good reason: most stores serve cookies until 3 a.m., when many students are looking to refuel or satisfy cravings.

The company has more than 100 locations in at least 29 states. In Illinois, it has seven stores including one near Loyola University of Chicago that doesn’t deliver to NU.

Downtown Evanston Executive Director Annie Coakley said the chain would be an asset to a city with few late-night delivery options. Though she played no part in attracting the chain to Evanston, she said its widespread popularity among college students made it a natural fit.

But Fiske, who hadn’t heard of the chain, said she wanted to gauge support among Northwestern students before voting yes. In the past, she said, similar businesses have not fared well — though none have offered late-night delivery.

“If I were a college student, of course I’d love to have a nice warm cookie when I was studying,” Fiske said. “But is that enough to help the business succeed? You never know how it’s going to be received.”

For Weinberg sophomore Ali Qureshi — a “very big cookie fan” who describes his baking as a “disaster” — the answer is clear.

“Coming to the U.S., my dream was to get a cookie from heaven that was very juicy, very thick and it would just sprout chocolate chips,” said Qureshi, who is an international student from Pakistan. “Insomnia was the answer.”

Qureshi said he first tried an Insomnia cookie during an all-night event at The Garage. After the first bite, he was hooked.

The Zoning Board of Appeals will hear the chain’s application Jan. 10. Fiske said the city will likely debate the chain’s late-night hours.