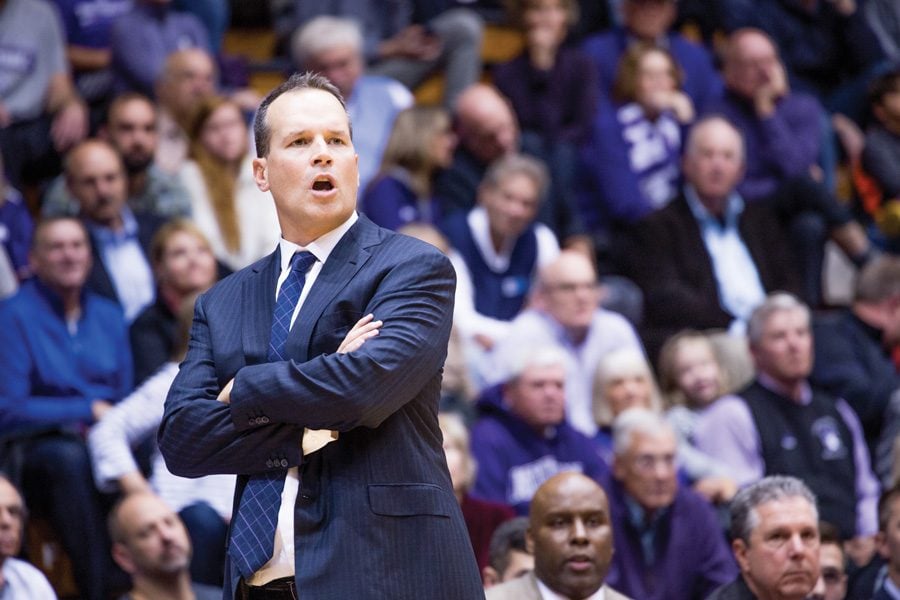 Chris Collins coaches from the sideline. Collins will look to lead the Cats past Minnesota on Thursday.

In the spring of 2013, Chris Collins became Northwestern’s coach around the time Richard Pitino filled the same position at Minnesota.

In the three years since, neither Collins’ Northwestern nor Pitino’s Minnesota has snapped its respective drought. But that could change this season, and a win in Thursday’s much-anticipated meeting between the two teams could prove a critical launching point for one of the teams.

“We both have similar upbringings: our fathers are coaches, we grew up with basketball, grew up with that name attached to us where you have to deal with other pressures,” Collins said. “Because of that, we’ve developed a good relationship, and I respect what he’s done there. … They’ve had highs and lows, just like we have, and I think both of our programs are in a really good place moving forward.”

The Cats (12-3, 1-1) enter their conference home opener projected by ESPN’s Joe Lunardi to make the NCAA Tournament, a feat they have never accomplished before.

The Golden Gophers (13-2, 1-1), led by junior guard Nate Mason, are coming off a rousing 91-82 overtime win on the road at then-No. 15 Purdue. Like the Cats, they are projected by Lunardi to make the tournament.

“Minnesota’s got all the pieces,” Collins said. “Right now, I think (Mason) is a first-team all-league, maybe the best guard in the conference when you put up his production.”

The same could not have been said last year for a Minnesota team that sat toward the very bottom of the Big Ten.

The Golden Gophers were beaten soundly, 77-52 and 82-58, in their two games against NU last season as they limped to a 2-16 conference record.

Amid the unpredictable start to this year’s Big Ten season, however—one in which perennial bottom-feeder Nebraska is already 2-0, traditional powerhouse Indiana is 0-2, Illinois has upset Ohio State and Minnesota has upset Purdue—Minnesota looks like a legitimate Big Ten contender.

“You see wins from other teams going into places or environments that are kind of shocking that they pulled out a win,” junior guard Bryant McIntosh said. “If you don’t show up to play each night, you can get beat, and I think that’s (been) shown in this Big Ten season.”

In the win over the Boilermakers, Mason scored 31 points. He ranks eighth in the conference in points per game and second in assists per game. The Golden Gophers also have three other players averaging at least 11 points per game including true freshman Amir Coffey—the brother of NU women’s basketball star Nia Coffey—and bruising 6-foot-10, 260-pound center Reggie Lynch.

McIntosh said Tuesday that he’s looking forward to his point guard matchup with Mason. Sophomore center Dererk Pardon, returning at last from an eight-game injury absence, will have his work cut out to keep up physically with Lynch.

Both teams enter the contest looking to solidify itself as a tournament contender with the Big Ten season still young.

Given how the winter has gone so far, the Cats’ blowout wins last year won’t mean much Thursday night at Welsh-Ryan Arena.

“There is no upper, middle, bottom tier,” Collins said. “There’s a lot of games where you go, ‘There’s no way that team (can win).’ Well yeah, they did. It just shows—and we talk about it as a team—you’ve got to play every night.”