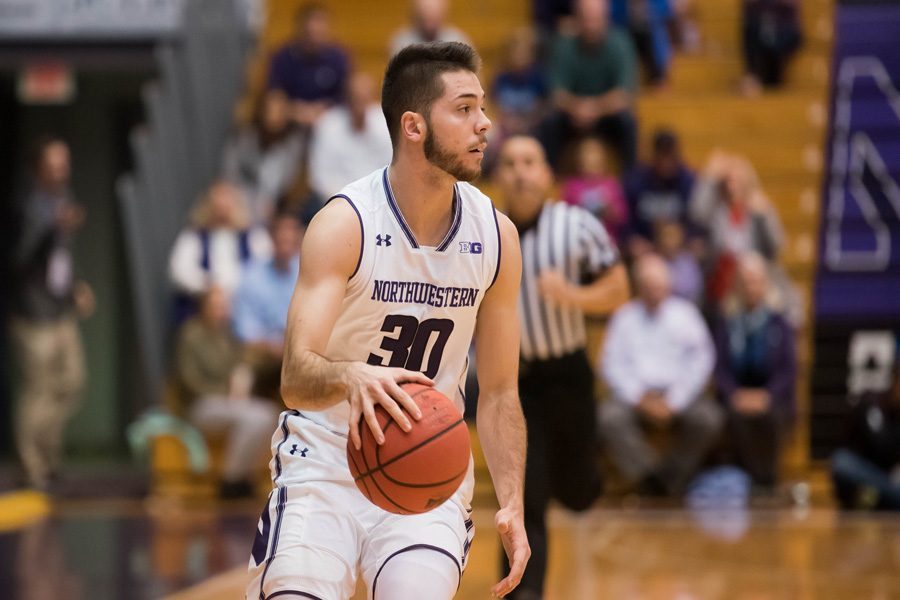 Bryant McIntosh dribbles the ball. The junior guard struggled against Michigan State as the Cats faltered on the road.

For Northwestern to secure its first NCAA Tournament bid, it will likely need wins over some of the Big Ten’s perennial powers. Unfortunately for the Wildcats, Friday’s 61-52 loss to a young and undermanned Michigan State team will go down as a missed opportunity in their road to Selection Sunday.

The Cats (12-3, 1-1 Big Ten) fell to the Spartans (10-5, 2-0) in NU’s worst offensive outing of the season. NU’s struggles came against a Michigan State lineup that starts three freshmen and is without its best player, forward Miles Bridges, who is out with an injury.

But the Cats, who have not won in East Lansing since Jan. 21, 2009, began slow against their vulnerable big-name opponent. Early turnovers and frequent fouling — mistakes a veteran NU team cannot afford in must-win games — limited the Cats’ early opportunities. The Spartans jumped out to a 28-9 lead, and NU never fully recovered.

“We want to win,” sophomore forward Vic Law said. “We know we can come to these games and compete with everybody, so when we’re down 20, good teams have to fight their way back. That’s what we’ve got to do.”

Despite cutting the deficit to 4 points in the second half, the Cats continued to make errant plays that prevented them from putting together any sustained runs. Junior forward Gavin Skelly fouled out with just over six minutes remaining in the contest, leaving NU undersized. Junior guard Bryant McIntosh and senior forward Sanjay Lumpkin, starters for the team, fouled out in the closing minutes.

With the team as a whole struggling and key players out, the Cats never made the necessary run to overtake Michigan State.

Though NU had a successful non-conference campaign with wins over solid programs like Dayton, Texas and Wake Forest, the team’s resume will likely be insufficient for a tournament nod without wins over other postseason contenders in Big Ten play.

“In the Big Ten, you have to regroup,” coach Chris Collins said of his team’s loss. “You get ready for the next game and you try to get back out there in the winning column.”

Now, NU — which is not scheduled to play any ranked opponents until late January when it faces No. 16 Indiana — must take down other middle-of-the-pack Big Ten teams as it prepares for future contests with the blue bloods of the conference.

And though early tournament talk has included NU-related chatter, the Cats still need to prove themselves against some of the league’s better teams. Although the Michigan State game would have been a prime opportunity to add a quality win, NU knows it will have other chances.

“We’re not going to hang our heads,” junior Scottie Lindsey said. “It’s very early. It’s just the second game in the Big Ten. So we’re definitely going to be getting ready for Minnesota and try to get back on track.”