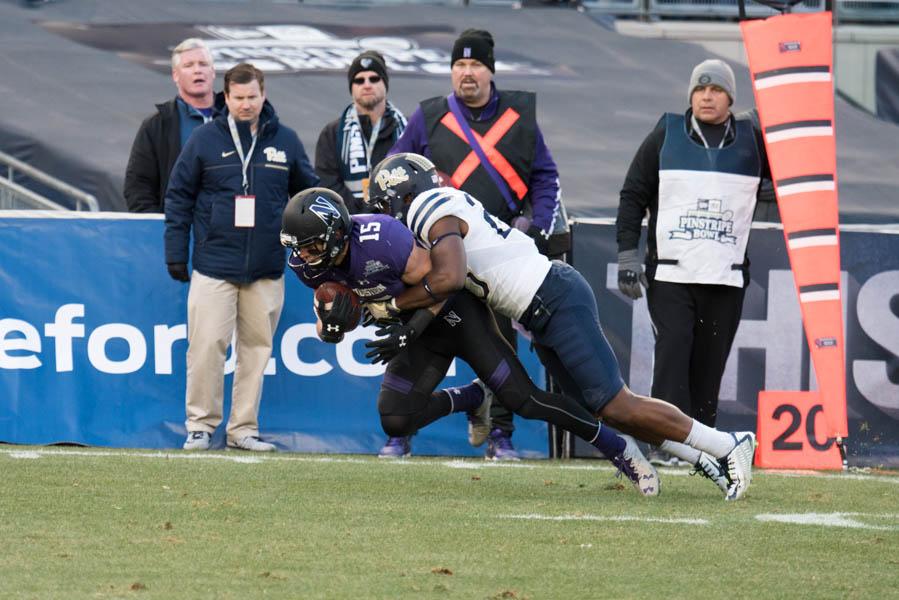 Macan Wilson catches a pass in the Pinstripe Bowl. With Austin Carr graduating, Wilson figures to be a big part of Northwestern's 2017 plans.

NEW YORK — Northwestern wanted to use the Pinstripe Bowl to send its seniors out with a win.

The Wildcats did indeed win, impressively upsetting No. 23 Pittsburgh, 31-24. But it was the team’s vast conglomerate of sophomores and juniors — not the seniors, who collectively touched the ball on just 10 of NU’s 86 offensive plays — who made that happen.

The victory gives NU (7-6) back-to-back winning seasons for the first time since 2009 and 2010, and considering the youth present throughout the roster, the Cats look poised to extend that streak, and potentially accomplish even more, come 2017.

“Hopefully this shows our guys just how hard it is to be a champion,” coach Pat Fitzgerald said. “We showed in mid-October and November that we had the competitiveness and the grit to be a competitive Big Ten team. … I think the way that we finished, with a win over our rival and then to come in here and beat a top-25 team in the fashion that we did, showed that the foundation is solid for the future.”

Junior linebacker Anthony Walker and junior safety Godwin Igwebuike may or may not end up declaring early for the NFL draft. Justin Jackson, however, laughed Wednesday at the idea he wouldn’t return for his senior year, when he’ll be surrounded by a talented and increasingly experienced cast of teammates.

Clayton Thorson, fresh off a record-setting season with 22 touchdown passes, will be back for his junior year. He’ll need to find a new No. 1 receiver now that Austin Carr is gone, but the speed of sophomore Flynn Nagel and junior Solomon Vault, get-open ability of junior Macan Wilson and physical tools of freshman Ben Skowronek make that tall task seem nonetheless possible.

“I’m very confident (in my returning receivers),” Thorson said. “I saw those guys make so many strides.”

In the running game, Jackson — already only the second runner in school history to top 4,000 career yards — will enjoy what should be a much-improved offensive line blocking for him. The line improved noticeably over the course of this season, culminating with a great final performance, and returns every starter except for right tackle Eric Olson.

NU will look remarkably similar on the defensive end, too. Ten of the defense’s 11 starters by season’s end, including the top seven tacklers against Pitt, have at least one season of eligibility left.

By allowing 22.1 points per game this season (23rd in the nation), the Cats actually took a significant step back from 2015, when their stingy 16.4 points-against-per-game average ranked seventh. Based on returning talent — and the marked in-season maturation of battle-tested young cornerbacks Montre Hartage and Trae Williams — they could be due for a leap back into the top 10 next fall.

Meanwhile, in the final game of their careers Wednesday, NU’s seniors were almost nowhere to be found.

“We had probably more seniors today in street clothes today than we had playing, or I think pretty close,” Fitzgerald said.

The Cats won a bowl game for the third time in their history, against a favored opponent with the crowd advantage on their side and a national television audience watching at home, by fielding a 22-man lineup that included just three seniors. In contrast, Pitt started 10 seniors and has at least one more, James Conner, headed straight to the pros.

When NU takes the field eight months from now for their 2017 season opener against Nevada, they’ll look nearly the same — plus an extra offseason of practice — as they did walking off the Yankee Stadium field under a shower of purple confetti Wednesday.

Given the rapid roster turnover rate that annually rids the college football universe of many of its biggest stars, the Cats’ homogeneity should be a source of great optimism.

“We finished with a winning record, won a bowl game, (and) obviously that doesn’t happen a whole lot for us around here,” said Thorson after concluding just the first half of his college career. “It’s important for us to make that a mainstay.”