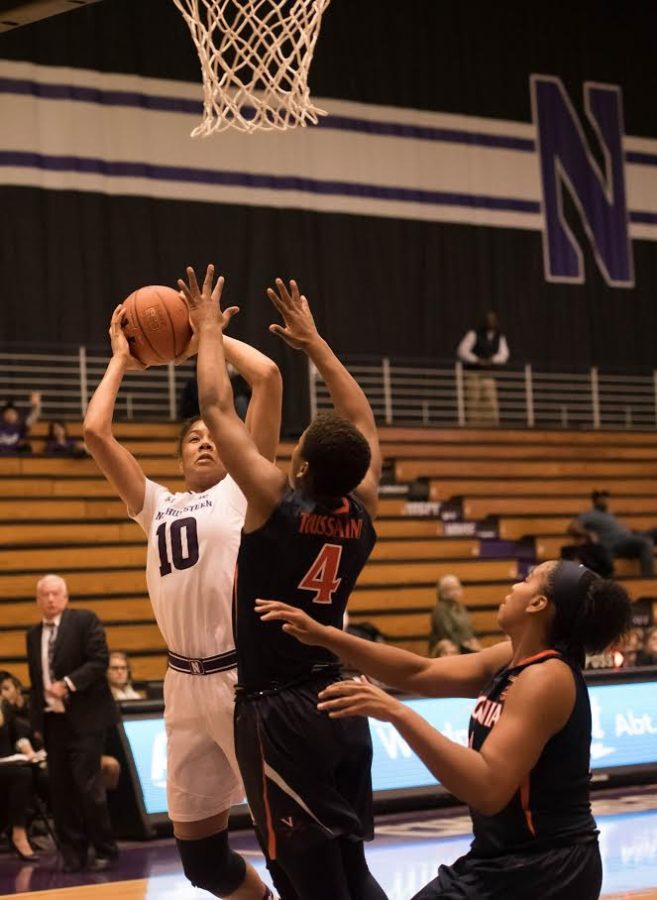 Nia Coffey attempts a shot over a defender. The senior recorded her 1,000th rebound against Gonzaga, becoming the first player in program history to reach the mark.

Through three quarters, Northwestern appeared on the verge of extending its seven-game win streak to eight. It took just one quarter for Gonzaga to flip the narrative.

The Wildcats (10-2) led for the majority of Monday’s game against the Bulldogs (8-2) but collapsed down the stretch, scoring just eight points in the final quarter to lose 67-56 on the road. Senior forward Nia Coffey’s 15-point, 14-rebound performance wasn’t enough as NU lost for the first time in a month, though the night did see Coffey hit the 1,000 rebound mark, a first in program history.

Gonzaga was led by forward Kiara Kudron, who had a double-double of her own with 11 rebounds and a game-high 16 points. The Bulldogs out-rebounded NU 46-31 and kept the Cats’ offense in check to overcome a slow start and 17 turnovers.

Gonzaga struggled offensively in the first half, shooting just 37 percent from the field. But the Bulldogs, aided by buzzer beaters at the end of the first and second quarters, trailed by only 5 points at the half.

Both offenses came alive in the third quarter in what quickly transformed into a three-point shootout.

Senior guard Ashley Deary had 13 points and five steals for the Cats, but picked up a costly fourth foul in the third quarter and had to sit out most of the fourth.

NU couldn’t find a way to pull ahead of the Bulldogs in the third quarter, and led 48-44 at the end of the third.

In the fourth frame, the Cats were smothered. Gonzaga surged ahead, thanks to a dominant fourth quarter from forward Jill Barta, who was hampered by foul trouble for most of the first half. NU scored just 3 points in the first nine minutes of the quarter and couldn’t make up the deficit in the final minute. The Cats shot just 38.6 percent from the field on the night as they dropped their second road game and overall contest of the season.

NU will be back in action when it takes on UT Martin at home on Thursday in its final non-conference game before Big Ten play.