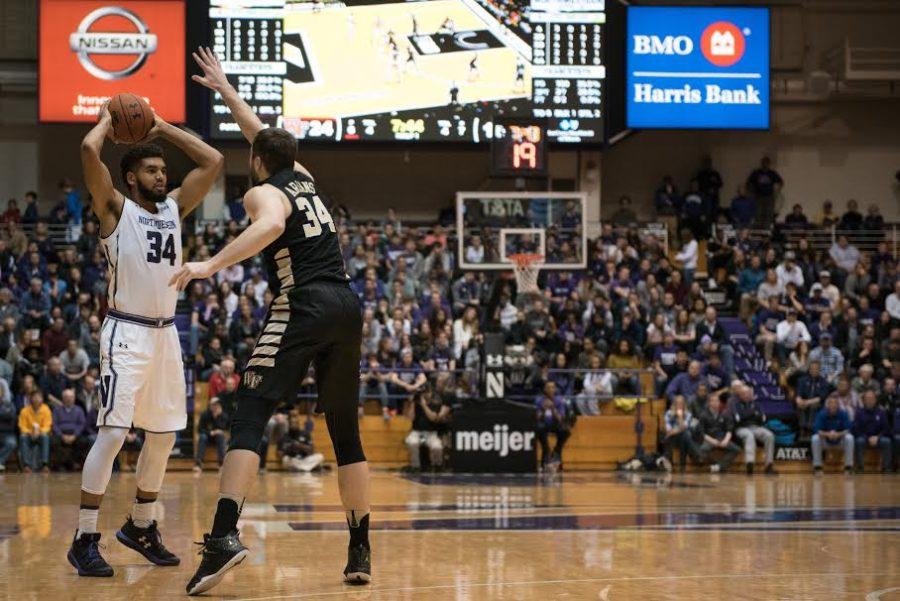 Sanjay Lumpkin looks to pass the ball. The senior forward grabbed a career-high 14 rebounds in Saturday's win over Dayton.

NU (9-2) earned a 67-64 victory at the United Center against a Flyers (7-3) team that has made the NCAA Tournament in three consecutive seasons. Dayton certainly looked the part of a formidable opponent in the second half, battling back from a 23-point deficit at halftime to force last-minute drama.

Three days after the Cats looked sluggish in their 68-64 win over Chicago State, they came out with energy on both ends to start the game, running out to an 11-0 lead. NU continued its strong play throughout the first half, showcasing a balanced offensive attack and smothering defense to capture a 40-17 lead by halftime.

“I think the first half was probably as good as we can play,” coach Chris Collins said on Big Ten Network after the game. “I thought our defense was really locked in. We made shots, we shared the ball.”

The second half could not have been more different.

The Cats seemed to play more tentatively in the second period as Dayton’s press threw them out of their offensive rhythm. The Flyers forced several key turnovers and pressured NU into difficult shots late in the shot clock.

“I just thought their quickness and athleticism kind of wore us down a little bit, and we were just trying to get to the finish line,” Collins said.

The Cats struggled to score down the stretch, connecting on just one field goal in the final 10:16. However, that shot was a critical one from junior point guard Bryant McIntosh, who drilled an elbow jumper with one minute left to stretch NU’s lead to six.

The Cats performed well below average from the free throw line most of the night, but made 6-of-8 in the final minute to keep the game just out of the Flyers’ reach. Dayton guard Scoochie Smith scored 8 points in the final 1:28 to pull Dayton within three, but then time ran out on the comeback.

Senior forward Sanjay Lumpkin was the Cats’ star of the first half, nearly recording a double-double with 8 points and 11 rebounds. He finished with a team-leading 14 points and 14 rebounds before fouling out. As he often does, Lumpkin featured heavily on the defensive end —— especially in the Cats’ brilliant first-half effort.

Junior forward Gavin Skelly has seen significant minutes at 5 in injured sophomore center Dererk Pardon’s absence, but was affected by foul trouble as he picked up four fouls in just 10 minutes and eventually fouled out. Lumpkin was left to shoulder rebounding duties and set a career high on the boards.

“Things were clicking on all cylinders for us,” Lumpkin said. “I was just trying to stay aggressive on the glass, collect as many rebounds as I could.”

Difficulty closing games has been a running theme for the Cats this season, with both of their losses coming in the final minute. NU was also outscored by 20 in the second half of its win over DePaul after leading by 36 at the break.

Nevertheless, the Cats were able to finish out a tight game and emerge with an important win against Dayton.

“In games like this last year, I think we weren’t as mentally tough, and sometimes we might turn the ball over,” junior forward Vic Law said. “Even in games earlier this season, we knew we had to take our lumps down the stretch of games. I think we learned from our mistakes and we’re coming through now.”