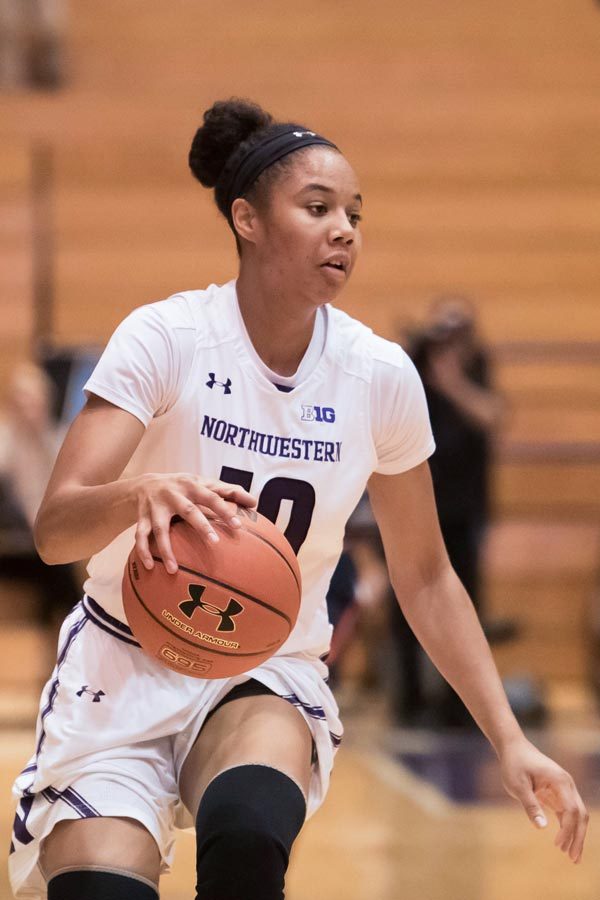 Nia Coffey handles the ball. The senior hit the go-ahead free throws in the closing moments to lift NU to victory.

Northwestern’s 8-point, final-minute lead vanished right before its eyes. But with the game tied in the closing moments, Nia Coffey made sure it didn’t matter.

The senior forward drew a foul with eight seconds to go and hit the ensuing free throws, giving the Wildcats (8-1) a 65-63 win at Milwaukee on Sunday. The late heroics came after the Panthers (7-2) scored 8 straight points in 44 seconds to erase a seemingly insurmountable deficit.

Coffey, the two-time defending Big Ten Player of the Week, led NU with 17 points and a 7-for-9 effort at the free throw line. She scored in double figures for the 57th consecutive game — a new program record — to lead the Cats past the Panthers for their fifth straight win and first of the season away from Evanston.

“We beat a good team today on their home floor,” coach Joe McKeown said on WNUR. “We just have to play better.”

NU had pulled away late in the fourth quarter, turning a one-point edge into an eight-point cushion thanks to a 7-0 run. Coffey led the charge, hitting a layup and knocking down a pair of free throws.

Milwaukee roared back, however, hitting 3-pointers on consecutive possessions to cut the Cats’ lead to 2. Freshman forward Abi Scheid then threw away an inbound pass, giving the Panthers an easy, game-tying layup with 12 seconds remaining.

“That’s not how you want to finish. Give Milwaukee a lot of credit,” McKeown said. “It’s just good to get out of here with a win.”

The frenetic late-game pace was a departure from the tempo earlier in the contest. Both teams shot under 37 percent and combined to shoot just 7-of-44 from 3. Coffey was an inefficient 5-of-14 from the field, and senior guard Christen Inman, who added 15 points, made just 5-of-17 field goals.

After falling to then-No. 20 DePaul, 89-66, on Nov. 17, the Cats have since found a groove. NU responded to the loss with a 73-68 upset of then-No. 16 Florida and defeated Virginia in the ACC-Big Ten Challenge less than a week later. In Sunday’s win, the Cats beat a Panthers team that entered the day off six straight wins, including a sound victory over Big Ten foe Wisconsin.

The current winning streak is NU’s longest since beginning last season 10-0. Unlike last year, however, when the Cats repeatedly blew late leads and lost at the buzzer, they have so far executed well in crunch time.

NU outscored Florida 17-8 in the fourth quarter to grab its biggest win of the year, and scored 7 points in the last 1:09 to secure the victory. Against Virginia, the Cats roared back from a 13-point halftime deficit and went on a 19-0 run in the second half.

Against Milwaukee, NU held firm early in the fourth quarter despite playing without Coffey and senior guard Ashley Deary, who were both on the bench with four fouls. Though the Panthers’ late run threatened the Cats’ recent stretch of late-game success, NU’s leading scorer delivered on the biggest possession of the contest, lifting the Cats to another victory.

“All these games are going to help us,” McKeown said of NU’s non-conference slate. “We’re going to take all the positives out of it.”